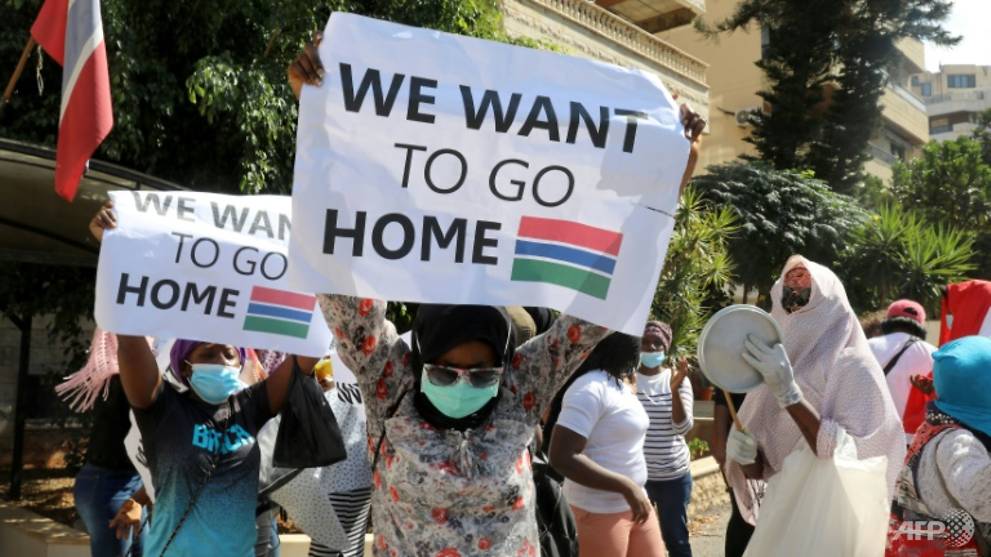 Foreign workers protest in front of on oof their embassies . They want their. embassies to take them back since their employers can longer afford to keep them after the corrupt Lebanese politicians and bankers stole their foreign currency accounts
Share:

After struggling first through Lebanon’s economic crisis and then the coronavirus pandemic, Ethiopian worker Tarik Kebeda said the deadly blast that ripped through her Beirut home was the final straw.

Inside the small house she shares with four friends, she pointed to the window frames covered by sheets, because the glass was smashed out by the August 4 explosion.

They had already lost their jobs — as domestic workers, or in supermarkets or restaurants — but now their home too is at risk.

“I’m scared to sleep here,” the 22-year old said, showing the deep cracks running down the bedroom’s walls, saying she feared the building “will collapse on top of us”.

Thousands of foreign workers were already stranded in Lebanon, after months of dollar shortages and then the coronavirus pandemic.

Then came the blast in Beirut’s port that killed more than 181 people, wounded thousands and devastated swathes of the city.

Many say it was just one disaster too many, and now they need to leave.

“I love Lebanon, but I don’t want to live here anymore,” Kebeda said. “There’s no more work. How will I eat?”

Next door, 31-year-old Romane Abera recounted how she hid beneath a parked car to hide from the explosion.

“Once, a truck came to distribute food boxes but they said: ‘Only give them to the Lebanese’,” Hana said.

Today her damaged home is barely held up by scaffolding, with hot gusts of summer air sweeping through a huge hole in the wall.

“I wish Lebanon could go back to how it was before,” said Abera, who left behind her baby boy in Ethiopia and recently lost her job.

Hundreds of thousands of migrant workers of multiple nationalities — including at least 250,000 housekeepers and carers — toil in Lebanon for cash to send home.

They enter Lebanon under a controversial sponsorship system called “kafala”, which has been repeatedly denounced by rights groups as enabling a wide range of abuses.

Under kafala, a worker cannot terminate their contract without the permission of their employer or they will lose their legal immigration status.

Outside the Gambian consulate in Beirut, around 30 Gambian women clamoured for help.

“We’re like slaves,” one protester shouted. “We are not treated well, and the racism here is very high.”

“We want to go home,” they chanted.

Some threw handfuls of dirt towards the building, while others hit its door with hammers.

“It should be a systematic, unconditional provision of laissez-passer to absolutely everyone in order to save their lives,” she said.

After the port blast, Lebanese shared videos online celebrating the courage of migrant workers helping with clean-up efforts in the streets, as well as footage of a housekeeper on August 4 diving to rescue a toddler from an imploding window.

But ARM says not enough attention is being given to the migrants who fell victim to the blast.

“The official tally of the deceased and the missing remains incomplete, excluding primarily people of non-Lebanese origin,” ARM said.

“Migrant workers and refugees are systematically dehumanised and marginalised in Lebanon, in life as in death.”

Outside the Kenyan consulate, dozens of women said they had been holding a sit-in since August 10 to demand their repatriation.

Among them, a 21-year-old recounted escaping abusive employers, only to be injured and see her home destroyed in this month’s explosion.

The consulate said efforts were underway to fly those who wished back home, but demonstrators complained of inaction.

Another woman said her employers had dumped her at the consulate just days after the blast without a passport or the salary she was owed, accusing her of being too ill to work.

“Who throws a sick woman on the streets at night?” she asked, with another woman’s five-month-year-old baby lying beside her.

“We just need help to go back home. Only that.”