The pain of loving Lebanon 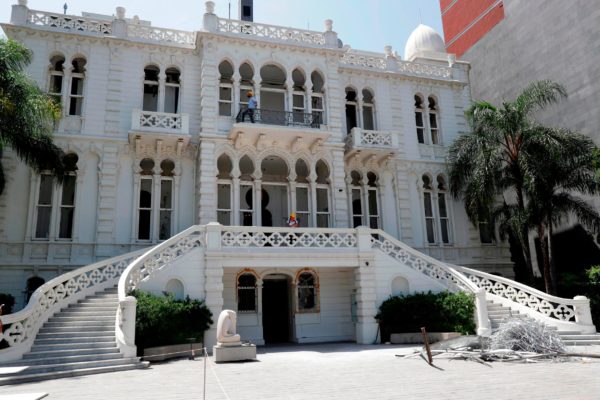 Once known as “the Paris of the Middle East,” Beirut’s rich and complex architectural heritage had long been under threat. Then the blast hit.
Share:

He was talking about the devastating explosion that ripped through Beirut a week earlier, when a staggering 2,750 tons of ammonium nitrate detonated. The blast left at least 180 people dead and 300,000 displaced. For many around the world, it brought Lebanon’s strife into sharp focus for the first time in years. The horrific explosion, it soon became clear, was caused by gross negligence. The stockpile of explosives had been sitting in the port for years with no proper safeguards, despite multiple warnings of the dangers.

My friend’s advertising and branding business, which he had lovingly built up from scratch, was smashed to pieces. In recent years, the company had just managed to survive the bleak economic climate in Lebanon, but for now there is no possibility of rebuilding. The cost is too great, and the risks are too high. No one wants to invest a penny more into the country’s economy without real hope that things will change.

Lebanon is no stranger to violence. In the ’70s and ’80s it endured a grueling 15-year civil war that left more than 100,000 people dead. The country has been invaded several times by Israel and occupied by Syrian troops for some 29 years. Lebanon has survived bombing campaigns and terrorism and sectarian strife. More recently, it has been consumed by economic crisis. Prices have soared Prices have soared as the currency’s value has plummeted. More than 55% percent of its people now live below the poverty line.

Throughout it all, the same band of feudal warlords and their families have remained in power, in part because of a law passed to help end the civil war that dictates that the president must be a Maronite Christian, the prime minister a Sunni Muslim and the speaker of the Parliament a Shi’a.

Traditionally, sectarian loyalties have trumped outrage over corruption and mismanagement. But the sheer senselessness of this horrific blast and the grotesque incompetence of those in power could make it a turning point.

“It’s not even war. It’s pathetic,” my friend went on to say. “We are traumatized. Angry. Disgusted.”

Like so many who have spent time in Beirut, the images of the explosion left me stupefied, sickened, and desperately saddened. To live in Lebanon, even as an outsider, is to embark on an intense and often painful love affair.

As one journalist, Josie Ensor, who was once based in Beirut, recently wrote, “If you don’t fall in love with it, you’ve misunderstood it. If you don’t hate it, you’ve done something wrong.”

I first moved there in 2005. I needed a base to spend time between grueling, six-week assignments in Baghdad, and Beirut was perfect. It is a microcosm of the Middle East and in that way an apt introduction. There are Sunni and

Shi’a Muslims and Druze (an isolationist offshoot of Islam whose people have historically lived in the mountains); Maronite and Orthodox Christians; Catholics, Armenians and Assyrians. The diversity is vibrant and fascinating; it has also been a source of misery.

Yet, for the most part, the Lebanese have no patience for self-pity. In times of war or peace, the mentality has remained: “Tonight we party for tomorrow we may die.” This hedonism is set against a stunning Mediterranean backdrop. The people are warm and charming and attractive and smart.

I lived in a neighborhood called Clemenceau. The view from my balcony would have been fantastic, were it not for the bullet-riddled skeleton of the Holiday Inn. Built in the 1970s, it had become the frontline of Lebanon’s civil war and the site of some of the fiercest fighting. After the war, it had been stripped of everything but the concrete. Now, it stood as a grim testament to a conflict whose underlying enmities remained. The Lebanese acted as if it wasn’t there.

Israel responded immediately, targeting dozens of buildings in Dahiyeh, Hezbollah’s stronghold in the southern suburbs of Beirut, as well as roads, bridges — even the airport. Thousands of Hezbollah rockets rained down across the border as Israeli airstrikes smashed the

south of the country. My neighborhood quickly became a destination for displaced people.

Many of the country’s elites simply decamped to the mountains. Restaurants and nightclubs followed suit and life continued, as normal, but transplanted about 30 miles from the conflict.

One night during the war, I decided to visit some Lebanese friends in the mountains for a quick break. They took me to one of the most popular clubs, Element. Inside, wealthy Lebanese girls with perfect French manicures danced on the bar, looking down at me with pity as I sat watching them, filthy and exhausted. They must have been able to see the judgment in my eyes.

“It’s not our war, hayati (sweetheart),” one of them said. The words lingered long after my hangover was gone. The ability to find life in the face of devastation demonstrated an impressive resilience. But it risked devolving into a dull acceptance of violence.

The conflict lasted exactly 34 days, but the destruction it wrought was enormous. Power stations and water and sewage treatment plants were hit, and much of Lebanon ground to a halt. Tourists and dual citizens were evacuated out of the country. Beirut, normally buzzing during the summer months, became a ghost town as people fled to the safety of the mountains. An estimated 1,109 Lebanese people were killed, mostly civilians.

A Lebanese filmmaker told me about the numbness he felt at that time. There was no electricity, and we were sitting

by candlelight. Beirut felt particularly spooky that night, all black and empty.

“It’s like someone has cut our wrist and given us a shot of morphine,” my friend said. “We’re bleeding to death, but we can’t feel it, we can’t even feel it.”

Things feel different today. Lebanon is hemorrhaging, and almost everyone is feeling it acutely.

A tide of popular revulsion against the long-reigning kleptocrats was rising long before the country was roiled by coronavirus, a collapse in the currency, and then the port explosion. Now, revulsion has hardened into inchoate anger, especially among the young, who have no memory of the civil war.

Could it be that the corruption and incompetence laid bare by the devastation will finally liberate Lebanon from the dead hand of sectarian elites who have long forgotten the people they are meant to represent?

The government has been dissolved, but there is no guarantee that a new government will be any different unless the sectarian power sharing agreement that underpins Lebanon’s political system changes.

There is genuine hope that this could be an inflection point but also deep fear that the country will quickly fall back into the familiar cycle of anger and then resignation.

I long to see Lebanon’s vibrant and creative spirit nurtured and its businesses rebuilt, with substantive, long-term support from the international community. The Lebanese people deserve better.

For many, it feels like the last chance for a fresh start.

“We are all desperate,” my friend said to me before hanging up the phone. “If this won’t change anything then to hell with us all.”