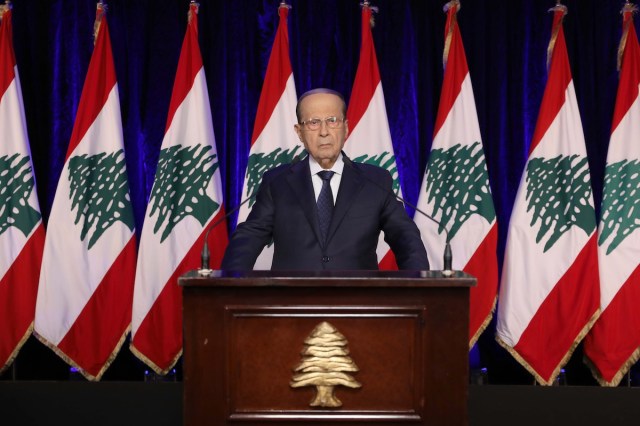 Lebanese President Michel Aoun dropped a bombshell statement on Saturday night, telling French TV his country may be ready for peace with Israel.

Asked in an exclusive interview with France’s BFM television whether Lebanon was ready to make peace with Israel, he responded: “That depends. We have problems with Israel and we have to resolve them first.”

It was a shocking statement by a president whose rise has benefited from a more than decade-old alliance with Hezbollah, arguably the most powerful military force in the country.

Asked what he thought of the United Arab Emirates’ treaty concluded with Israel last Thursday, Aoun responded that the UAE “is an independent country.”

That suggested Aoun would not be held back from negotiations by any pan-Arab considerations.

I think they’re just trying to buy time, as he and his allies are very desperate. I don’t think this is serious or would lead to any serious talks. Every time they’re pushed against the wall, Hezbollah tries to buy time. #Lebanon #BeirutBlast https://t.co/RpFdqntMIA

The implicit invitation for diplomacy came as a rising tide of high-profile figures in Lebanon have accused Israel of the attack on Beirut Port – and Hezbollah for allegedly storing its weapons there and exposing the capital as a target.

The explosion killed at least 178 people, including the wife of the Dutch ambassador, with dozens still missing and thousands wounded.