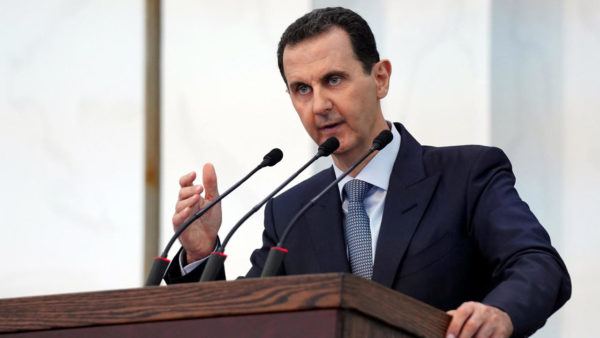 Syrian President Bashar al-Assad on Wednesday slammed the latest US sanctions as a further “escalation” aimed at “strangling” his country, ravaged by war and economic crisis.

Assad made the comments in his first address to the new parliament elected in July, in a sitting held at the presidential palace to allow for social distancing.

“The escalation to strangle the Syrian people continues,” he said.

During his speech, Assad had to pause due to what he said was low blood pressure, but restarted shortly afterwards to applause and lawmakers chanting: “by blood, by our soul, we sacrifice ourselves for you Bashar!”

The new sanctions were imposed under the Caesar Act, a US law that took effect in June and aims to prevent any normalisation with Assad even after his forces won back most of Syrian territory after nine years of war.

Fears of action against foreign investors under the Caesar Act have wreaked further havoc on Syria’s economy by dimming hopes for reconstruction.

In his speech, Assad also stressed that “the fight against corruption has intensified”, vowing to “continue to recover embezzled public funds through legal means.”

Assad’s government is engaged in an unprecedented power struggle with his cousin Rami Makhlouf, the head of a commercial empire estimated at several billion dollars that includes Syriatel, the country’s leading mobile phone operator.

“There will not be favouritism for anyone who thinks himself above the law,” the president warned.

In a series of videos posted to Facebook this summer, Makhlouf, himself on the US sanctions list since 2008, called on his cousin Assad to intervene, accusing the authorities of trying to intimidate him to extract profits from his company.

Syria, wracked by war that has killed more than 500,000 people since 2011, is facing a severe economic crisis, with the national currency collapsing in value on the black market.