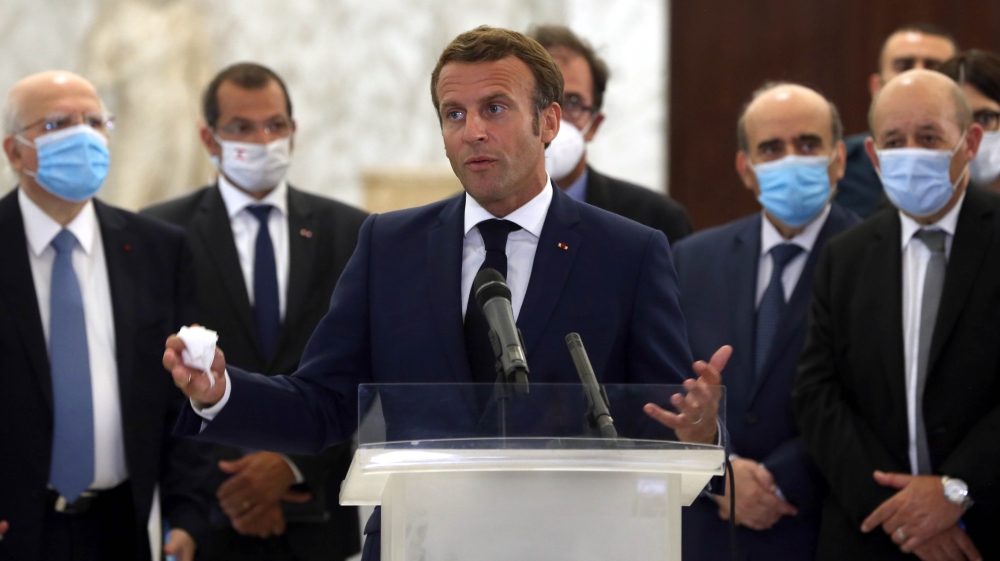 Beirut- Lebanon – Visiting French President Emmanuel Macron told angry Lebanese crowds in downtown Beirut that French aid would not go to “corrupt hands” and he would seek a new deal with political authorities.

“I guarantee you this – aid will not go to corrupt hands,” Macron told protesters in central Beirut two days after the city was devastated by a blast.

“I will talk to all political forces to ask them for a new pact. I am here today to propose a new political pact to them,” he said, after being greeted by crowds calling for an end to the “regime”.

Macron mobbed in Beirut. Down with the regime, locals chanted, and called for Revolution while declaiming Lebanon's President Aoun. pic.twitter.com/4ntkZToUFj

French President Emmanuel Macron toured Beirut’s shattered streets with crowds demanding the end to a “regime” of politicians they blame for corruption and dragging Lebanon into disaster.

“I see the emotion on your face, the sadness, the pain. This is why I’m here,” he told one group, shaking their hands on roads strewn with rubble and flanked by shops with windows blown out after Tuesday’s blast that killed 145 and injured 5,000.

Macron promised to send more medical and other aid to Lebanon, while those around him chanted “Revolution” and “The people want the fall of the regime.”

“But what is also needed here is political change. This explosion should be the start of a new era,” Macron said, making the tour shortly after arriving on the first visit to Lebanon by a foreign leader since the blast.

One man told Macron: “We hope this aid will go to the Lebanese people not the corrupt leaders.”

Macron announced that an international aid conference for disaster-hit Lebanon would be held soon.

Speaking to journalists at the end of snap visit to Beirut, he said the conference would be held “in the coming days”.

He stressed that the aid raised during the conference would be chaneled “directly to the people, the relief organisations and the teams that need it on the ground”.

Separately, the French leader stressed that an audit of the Lebanese central bank, among other changes, was needed in order to help the cash-strapped country, adding that the World Bank and UN would play a role in implementing reforms.

“If there is no audit of the central bank, in a few months there will be no more imports and then there will be lack of fuel and of food,” he said.

Macron has said that an independent, transparent investigation into the massive explosion in Beirut is “owed to the victims and their families” by Lebanese authorities.

Angry crowds approached Macron and the Beirut governor as they walked through a blast-torn street, and through a devastated pharmacy.

After meeting with political leaders later, the French leader mentioned the “anger in the street” he had witnessed earlier.

He said: “There is a political, moral, economic and financial crisis that has lasted several months, several years. This implies strong political responsibility.”

He said he discussed addressing corruption and other needed reforms with Lebanon’s president and prime minister.

“I came here to show the support of the French nation for the Lebanese people,” Macron said, stressing the word “people.”