Beirut explosions caused by a highly explosive chemical stored since 2014 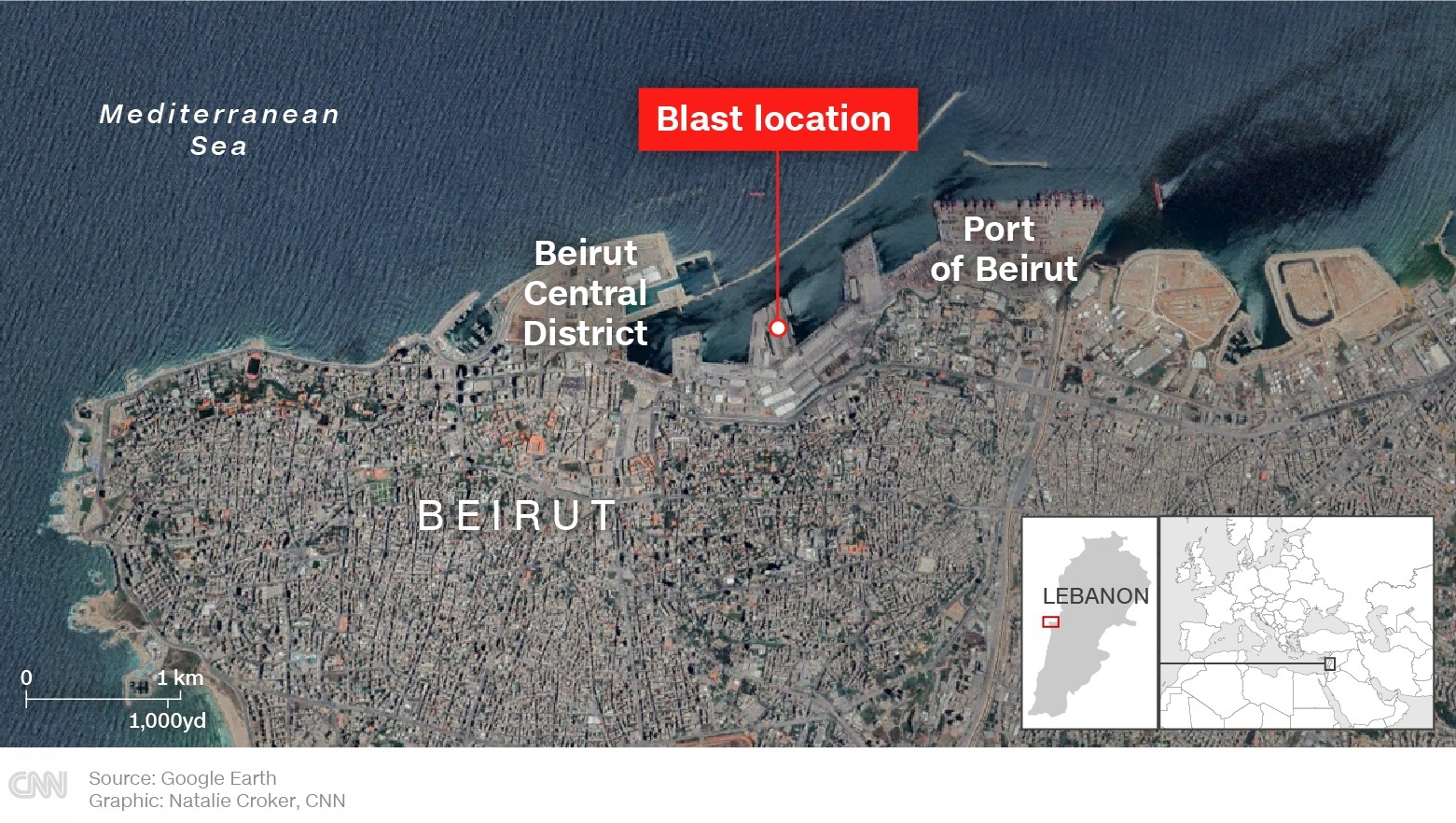 The explosion occurred in the heart of Beirut near residential and commercial areas
Share:

A large blast in the Lebanese capital, Beirut, has killed at least 70 people and injured more than 4,000 others, the health minister says.

Videos show smoke billowing from a fire, then a mushroom cloud following the blast at the city’s port.

Officials are blaming highly explosive materials stored in a warehouse for six years.

President Michel Aoun tweeted it was “unacceptable” that 2,750 tonnes of ammonium nitrate was stored unsafely.

An investigation is under way to find the exact trigger for the explosion. Lebanon’s Supreme Defence Council said those responsible would face the “maximum punishment” possible.

Hospitals are said to be overwhelmed and many buildings have been destroyed.

President Aoun declared a three-day mourning period, and said the government would release 100 billion lira (£50.5m; $66m) of emergency funds.( For those unfamiliar with the financial crisis in. Lebanon these are stolen funds from bank accounts of depositors )

A BBC journalist at the scene reported dead bodies and severe damage, enough to put the port of Beirut out of action.

Prime Minister Hassan Diab called it a catastrophe and said those responsible must be held to account.

He spoke of a “dangerous warehouse” which had been there since 2014, but said he would not pre-empt the investigation.

“All the buildings around here have collapsed. I’m walking through glass and debris everywhere, in the dark,” one witness near the port told AFP news agency.

The blast was heard 240km (150 miles) away on the island of Cyprus in the eastern Mediterranean.

The explosion comes at a sensitive time for Lebanon, with an economic crisis reigniting old divisions. Tensions are also high ahead of Friday’s verdict in a trial over the killing of ex-Prime Minister Rafik Hariri in 2005.

‘Glass going down from all over the building’

I saw the fire, but I didn’t yet know there was going to be an explosion. We went inside. Suddenly I lost my hearing because apparently I was too close. I lost my hearing for a few seconds, I knew something was wrong.

Literally all over Beirut, people were calling each other from different areas kilometres away and they were experiencing the same thing: broken glass, buildings shaking, a loud explosion.

Actually we were shocked because usually when it happens, just one area will experience those happenings after an explosion, but this time it was all of Beirut, even areas outside of Beirut.

“Driving into Beirut early evening when it was still light, it was absolute chaos. The streets were literally covered in glass. It’s hard for ambulances to go through – there’s bricks, cement slabs. Houses have collapsed.

“When I got to the port it had been closed off by the army. The army said to stay away in case there was a second explosion.

“There was still smoke going up into the sky late into the evening. The whole city was black. It was very hard to walk around, people were covered in blood. I saw an 86-year-old woman being treated by a doctor who had just run out of his home with a first aid kit. Cars were entirely smashed by rocks. These old-style houses with big cuts of rock had just fallen down on the street.

“It’s pandemonium in my own flat, all the glass is shattered. The extent of the damage is extreme. Even in a mall 2km away – the whole facade was shattered.”

What is ammonium nitrate?

Ammonium nitrate has a number of different uses, but the two most common are as an agricultural fertiliser and as an explosive.

It is highly explosive when it comes into contact with fire – and when it explodes, ammonium nitrate can release toxic gases including nitrogen oxides and ammonia gas.

Because it’s so flammable there are strict rules on how to store ammonium nitrate safely – but among the requirements are that the storage site needs to be thoroughly fire-proofed, and there can’t be any drains, pipes or other channels in which ammonium nitrate could build up, creating an additional explosion hazard.

Explosives made of ammonium nitrate, a common form of nitrogen fertilizer, are widely used in industry and have largely replaced dynamite in the blasting of rock for mines according to analysts.

The bomb used in the 1993 bombing of the World Trade Center in New York was made of ammonium nitrate.

How have other countries reacted?

Lebanon’s prime minister also called for international help: “I make an urgent appeal to friendly and brotherly countries… to stand by Lebanon and to help us heal our deep wounds,” Hassan Diab said.

UK Prime Minister Boris Johnson tweeted: “The pictures and videos from Beirut tonight are shocking. All of my thoughts and prayers are with those caught up in this terrible incident.

“The UK is ready to provide support in any way we can, including to those British nationals affected.”

US President Donald Trump sent his deepest sympathies after what he called “a terrible attack”, and his Secretary of State Mike Pompeo offered assistance, tweeting: “We are monitoring and stand ready to assist the people of Lebanon as they recover from this horrible tragedy.”

France said it was sending aid and resources to Lebanon.

Israel said in a statement that it had “approached Lebanon through international security and diplomatic channels and has offered the Lebanese government medical and humanitarian assistance”.

The German foreign ministry said the blast had been felt at its embassy in the city.

“We cannot for the moment exclude German nationals figuring among the dead and wounded,” it said in a statement.

What’s the situation in Lebanon?

Lebanon is experiencing political turmoil, with street demonstrations against the government’s handling of the worst economic crisis since the 1975-1990 civil war.

Many blame the ruling elite who have dominated politics for years and amassed their own wealth while failing to carry out the sweeping reforms necessary to solve the country’s problems. People have to deal with daily power cuts, a lack of safe drinking water and limited public healthcare.

There has also been tension on the border with Israel, which said last week that it had thwarted an attempt by Hezbollah to infiltrate Israeli territory. But a senior Israeli official has told the BBC that “Israel has no connection” to the Beirut blast.

The blast happened close to the scene of the huge car bombing which killed ex-PM Hariri. Tuesday’s blast also came days before the long-awaited verdict in the trial at a special court in the Netherlands of four men accused of orchestrating the attack.