Hezbollah sides with Iran against Lebanon 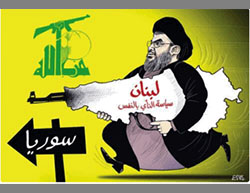 It appears that Hezbollah refused to receive the message that the overwhelming majority of the Lebanese people want neutrality not only Maronite Patriarch, Cardinal Mar Bishara Boutros Al-Ra’i .

The speech of its ally the Grand Shiite Jaafarite Mufti Sheikh Ahmed Qabalan on Friday during which he attacked neutrality is a clear indication that Hezbollah is totally opposed to neutrality in Lebanon .

Qabalan admitted that Lebanon is suffering from despair , exhaustion, monopolization, societal and moral disasters, frightening shortfall in the authority’s ability amid the total absence of conscience, but he is still attacking neutrality .

He said that” Lebanon is in the eye of the storm. It can not be neutral, on the contrary it must be an active partner to defend itself and its interest, otherwise it could be an easy prey.”

Patriarch Rai spoke for the majority for the Lebanese when he launched his campaign for Lebanon neutrality.

His campaign has been a  major concern for Hezbollah which has aligned itself with Iran in the so called axis of resistance, a position which violates the 2012 Baabda Declaration that calls for isolating Lebanon from regional conflicts .

For this reason Hezbollah has been sending various types of influential people to Rai’s summer residence to dissuade him from carrying on with his campaign but so far Hezbollah appears to have failed badly , specially since the majority of the Lebanese appear to side with him on this issue .

The Future Movement leader and former PM Saad Hariri , Lebanese Forces leader Samir Geagea, Progressive Socialist leader Walid Jumblatt and several other key political and religious leaders declared their support for Lebanon’s neutrality . So far only Hezbollah seems to be critical of Rai’s move while its allies have been either silent on the issue or giving mixed reactions .

Hezbollah first sent the Iranian ambassador to Patriarch Rai at his summer residence to convince the Patriarch of Iran’s capability to help Lebanon. Sensing no change in his resolve , Hezbollah sent PM Hassan Diab to visit the patriarch one day later and two days later it sent Aoun’s son- in-law MP Gebran Bassil to visit the Patriarch . All these actions strengthened patriarch Rai’s resolve and he vowed to continue with his neutrality campaign till the very end .

Yesterday Hezbollah sent the key point man of the Lebanese government authorities , Major General Abbas IBRAHIM , head of Lebanon’s Directorate of General Security (DGS), a key ally of Speaker Nabih Berri , who is allied with Hezbollah .( Ibrahim has become very influential troubleshooter domestically and was recently sent to Qatar and Kuwait by president Aoun , since the Gulf Arab countries have refused to receive any members of the Hassan Diab’s cabinet , which is labeled as a Hezbollah cabinet)

“Neutrality requires a consensual agreement among the entire Lebanese. God willing this will happen,” said Ibrahim after his meeting at Rai’s summer residence in al-Dimane.

Ibrahim denied that he carried any message from Hezbollah to Rai

But Hezbollah seems to be the only party opposed to neutrality . There is consensus among all the Lebanese except Hezbollah on this issue.

Many analysts are of the opinion that Hezbollah allegiance to Iran prevents it from being neutral , because Iran forces it to side with it in its expansionist policy in the region .

But do the Lebanese people have any interest in helping Iran expand its area of influence in the region at Lebanon’s expense?

If Hezbollah wants to side with Iran against Lebanon , we cannot coexist and hence we should part company .

Perhaps the only solution is to let Hezbollah have a part of Lebanon to run on its own while the remaining part will be declared as a neutral country.

No matter how we look at the situation in Lebanon today the reason the country is in such a huge mess is because of Hezbollah and the whole world knows it .

Since Diab’s government proved incapable of governing we need a new transitional government that will arrange for new parliamentary election and let the new parliament decide the future of Hezbollah Lebanon relations knowing that the current status quo is not workable for Lebanon.

Hezbollah is treating Lebanon as a colony of Iran while the overwhelming majority of the Lebanese people want to be a free , independent and sovereign nation.

Lebanon is sitting on a time bomb that could explode anytime if nothing is done to correct the unbearable situation .

The time to act is now .

The Lebanese Army chief should take over , form a military government to arrange for parliamentary election before the end of the year.
The new parliament should decide the future of Lebanon in the first quarter of 2021.