Crisis hits Lebanon’s hospitals, among the best in Mideast 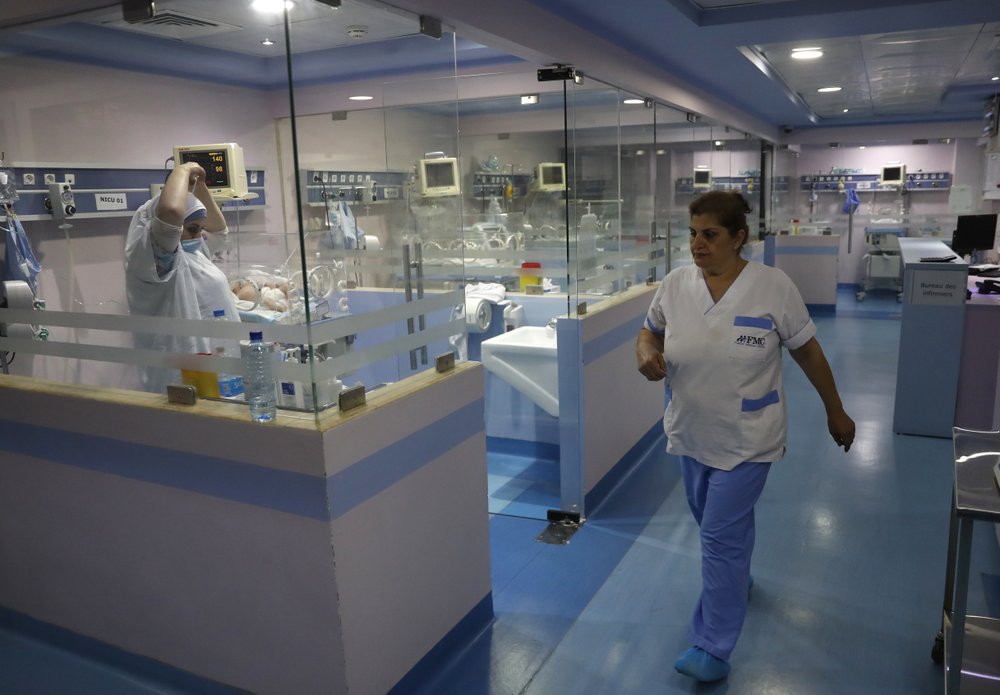 Nurses work at the neonatal intensive care unit, at Family Medical Center, a private hospital facing financial difficulties, in Majdalaiya village, north Lebanon, Thursday, July 16, 2020. Just as Lebanon faces a surge in coronavirus cases, hospitals are cracking under the country’s financial crisis. They are struggling to pay staff, keep equipment running or even stay open amid shortages in key supplies like anesthesia and sutures. The health sector has long been one of the best in the Middle East, with its private hospitals drawing patients from around the region. But with dollars in short supply and the state unable to pay insurance bills, hospitals are having to turn away patients and close wards to cut costs. Public facilities, on the front line of the coronavirus fight, are too underfunded and understaffed to fill the gap. (AP Photo/Hussein Malla)
Share:

BEIRUT (AP) — Lebanon’s hospitals, long considered among the best in the Middle East, are cracking under the country’s financial crisis, struggling to pay staff, keep equipment running or even stay open amid a surge in coronavirus cases.

Private hospitals, the engine of the health system, warn they may have to shut down. Chronically underfunded public hospitals, which have led the fight against the virus, fear they will be overrun.

Across the country, hospitals and doctors are reporting shortages in vital medical supplies such as anesthesia drugs and sutures. With power cuts that run through most of the day, they pour money into fuel for generators, and many are turning away non-critical cases to conserve resources.

“The situation is really catastrophic, and we expect a total collapse if the government doesn’t come up with a rescue plan,” said Selim Abi Saleh, the head of the Physicians Union in northern Lebanon, one of the country’s poorest and most populated regions.

One of the country’s oldest and most prestigious university hospitals, the American University Medical Center, laid off hundreds of its staff last week citing the “disastrous” state of the economy and causing uproar and concern.

Medical facilities have let go of nurses and reduced salaries, their finances running dry in part because they can’t collect millions owed to them by the state. Nearly a third of Lebanon’s 15,000 physicians aim to migrate or already have, a doctors’ union official said, based on the number who have sought union documents they can use abroad to prove their credentials.

So far Lebanon has kept a handle on its pandemic outbreak, through strong lockdowns, aggressive testing and a quick response, largely by public hospitals. The country has reported fewer than 3,000 infections and 41 deaths.

But with cases rising, many in the field fear the health sector can’t hold up under a surge and a financial crisis worsening every day.

Lebanon’s liquidity crunch has crippled the government’s ability to provide fuel, electricity and basic services. The shortage of dollars is gutting imports, including medical supplies and drugs.

Prices have spiraled, unemployment is above 30% and nearly half the population of 5 million now live in poverty.

Private hospitals, which make up around 85% of the country’s facilities, emerged dominant after the country’s brutal 15-year civil war to become the pride of Lebanon’s system, drawing patients from around the region with specialized services and advanced surgeries.

But the entire health sector, like much of the country, has also run on political jockeying and patronage in Lebanon’s sectarian system. Medical practitioners say politics determine how much payment from the state private hospitals receive while public facilities remain understaffed.

The insurance system, with multiple health funds, is chaotic, making collection difficult and coverage patchy. For years, state insurance funds failed to reimburse hospitals. Private hospitals say they are owed $1.3 billion, some of it dating back to 2011.

“We can’t fight COVID and at the same time keep looking behind our backs to see whether I have enough financial and material resources,” said Firas Abiad, director general of Rafik Hariri University Hospital, the public hospital leading the coronavirus fight.

Abiad, who has won praise for his transparency in handling the pandemic, is getting by with stop-gap measures. When he raised alarm this month that the hospital was running out of fuel, a rush of private donations flowed in. The government pledged to provide fuel for public facilities.

“I doubt anybody has any long-term strategy,” Abiad said. “We are doing it one fight at a time, and we are surviving one day at a time.”

Financing must be priority, he said. “Generators can’t run on empty, without fuel. Hospitals can’t run without financing.”

Minister of Health Hamad Hassan told The Associated Press Monday he was counting on government support to keep hospitals as a “red line.” But he urged hospitals to do their part to push through the crisis.

“Hospitals have invested in this sector for 40 years. Whoever has invested that long should have the courage to invest for six months or a year to help his people and not give up on them,” he said.

Private hospitals’ struggles are compounded by a banking sector crisis that has locked down foreign currency accounts and complicated imports and the issuing of letters of credit.

In the northern village of Majdalaiya, the state-of-the art, 100-bed Family Medical Center hospital stood nearly empty last week. Its owner, oncologist Kayssar Moawad, said he had to shut down one of the five floors to save costs.

Moawad has had to refuse patients with state insurance. The government already owes him millions of dollars, he said.

“It has to be a life or death situation,” Moawad said. “This is not sustainable.”

He said in recent weeks, he admitted 20 patients at most, while treating others as outpatients to save costs. His facility is prepared to deal with COVID-19 patients but he said it won’t because it is too expensive.

“We don’t want to get to a Venezuela-scenario where we diagnose the patient but ask them to bring their own medicine, food, and sheets,” he said. “I hope we don’t get there.”

There was only one baby in the hospital’s 13-bed neonatal unit. On the adults’ floor, there were three patients.

One of them, an 83-year-old man recovering from arterial surgery, had to pay out of pocket because his private insurance won’t cover the room or the stent. If a brother hadn’t come from Germany to cover the costs, “he would have died,” said his daughter, Mayada Qaddour.

Moghrabi, now in his 70s, rebuilt the hospital in the northern city of Tripoli from scratch since he took it over in 2003, almost totally through foreign donations. Still, it relies on state funds and insurance payments — both minimal — so it has never been able to operate at full capacity of 5,000 births a year.

Now desperately short of funds and fuel, the hospital has to juggle priorities. It suspended its neonatal unit to keep life-saving dialysis running.

“In 2020, (a hospital) can’t do without a neonatal unit,” Moghrabi said. “With the current circumstances in Lebanon, we are going back to the 1960s, even further.”