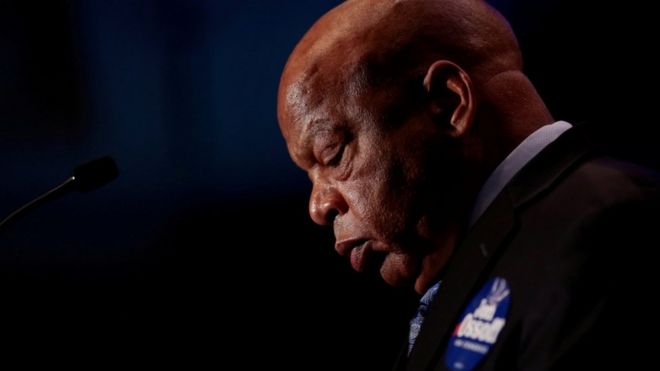 US and world leaders joined the tributes to civil rights icon John Lewis, who has died of pancreatic cancer at the age of 80.
Share:

US presidents and foreign leaders have joined the tributes to civil rights icon John Lewis, who has died of pancreatic cancer at the age of 80.

Lewis was one of the “Big Six” civil rights leaders, which included Martin Luther King Jr, and helped organise the historic 1963 March on Washington.

Barack Obama is among those who have praised Lewis’s legacy.

President Donald Trump later said in a tweet that he was “saddened” to hear of the former congressman’s death.

A petition to rename a bridge in Alabama that played a pivotal role in Lewis’s life has drawn more than 400,000 signatures.

‘Conscience of the nation’

Mr Biden said he had spoken to Lewis in the days before his death.

“His voice still commanded respect and his laugh was still full of joy. Instead of answering our concerns for him, he asked about us. He asked us to stay focused on the work left undone to heal this nation.”

Each of the four living former US presidents paid tribute to Lewis.

“Not many of us get to live to see our own legacy play out in such a meaningful, remarkable way. John Lewis did,” Barack Obama said. “And thanks to him, we now all have our marching orders – to keep believing in the possibility of remaking this country we love until it lives up to its full promise.”

His predecessor George W Bush said Lewis had “worked to make our country a more perfect union”, while Bill Clinton described him as “the conscience of the nation”.

Jimmy Carter, meanwhile, noted that the former congressman had “made an indelible mark on history through his quest to make our nation more just”.

The response from current President Donald Trump, however, was far more muted and came hours after messages were issued by other US politicians.

“Saddened to hear the news of civil rights hero John Lewis passing. Melania and I send our prayers to him and his family,” said Trump, whom Lewis had publicly criticised.

Civil rights activists spoke of their sorrow at Lewis’s death.

“John Lewis is what patriotism and courage look like,” civil rights activist Rev Jesse Jackson, who first met Lewis during protests in 1960, said.

Martin Luther King III, the eldest son of the civil rights activist, told CNN: “From a historical standpoint, there are few who are able to become giants… John Lewis really became a giant through his examples that he set for all of us.”

The bridge crosses the Alabama river in the state’s town of Selma.

In 1965, John Lewis led hundreds of protesters over the bridge on a peace march to Montgomery.

State troopers attacked them and Lewis was left with a broken skull on what became known as Bloody Sunday.

He walked across the bridge with then President Obama 50 years later.

The bridge was named after a Confederate general and later Ku Klux Klan leader in Alabama.

The petition on change.org cites the recent movement to remove statues and monuments to the Confederate past in the wake of the death in police custody of African American George Floyd.

“As we wipe away this country’s long stain of bigotry, we must also wipe away the names of men like Edmund Pettus,” the petition argues