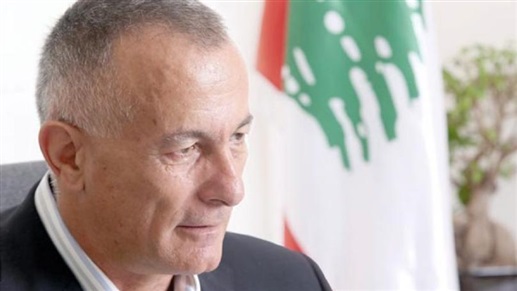 Retired Brigadier General Chamel Roukoz (son-in-law of President Michel Aoun) and former member of the Free patriotic Movement Parliament bloc which is headed by Aoun’s other son-in-law Gebran Bassil . He is now independent and has been siding with the protests against the ruling elite
Share:

“I am going down to the street to express my opinion clearly and openly before the people and with the people. I am not pleased with the policy of the State as a whole, nor about the work of the government,” said Roukoz in a televised interview with MTV station.

“Only betraying one’s nation is called treason. I come from the school of “honor, sacrifice and loyalty,” he said when MTV reporter asked him if he believes his move betrays his father-in-law.

The invitation to the sit-in stated: “Because of the authority’s impotence and indecisiveness threatening the society’s survival, an alternative exists in a transitional government with exceptional powers that establish the legitimacy of the civil state.”

“No authority of quotas to serve corruption, and no technocrat authority to cover the real authority, and no military authority to suppress freedoms,” added the invitation.”

Lebanon is facing a worsening economic crisis pushing many into poverty, decades-long electrical power crisis that has plunged much of the country in darkness, adding to a recurrent trash management crisis threatening to turn the country’s streets into a large dumpster.

Mass demonstrations erupted in October demanding the wholesale removal of a ruling class deemed inept and corrupt. But the protests have remarkably dimmed following the global outbreak of COVID-19 virus.