Hezbollah files official complaint against US ambassador to Lebanon 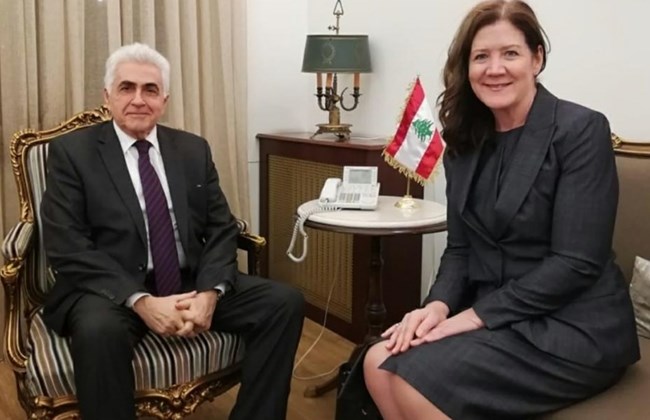 File photo of Lebanese Foreign minister Hitti with U.S. ambassador to Lebanon, Dorothy Shea in Beirut, March 6, 2020. Hitti and Shea discussed earlier this month a court ruling issued last month in which a Lebanese judge from a Hezbollah stronghold in South Lebanon banned local and foreign media outlets in the country from interviewing the ambassador for a year over comments she made regarding the Iranian backed Hezbollah group. The judge has since resigned following an outrage over his ruling (AP Photo/Hussein Malla) (ASSOCIATED PRESS)
Share:

“In the name of the Loyalty to Resistance bloc, we lodged with Minister Hitti an official protest letter against the statements and violations of the US ambassador,” Raad said, using another name for the parliamentary bloc.

“We asked Minister [Nassif] Hitti to take the measures that he sees appropriate to rein in the US ambassador’s behaviour, statements and meddling in our domestic affairs,” he said.

“The ambassador must stop interfering in our internal affairs and she must stop the rhetoric that incites the Lebanese.”

The complaint comes weeks after a judge issued an “unenforceable” ruling banning local and foreign journalists from interviewing Shea.Lebanese judge who issued media ban against US ambassador resignsRead More »

Shea had given an interview with the Saudi-owned Al-Hadath news channel and said that Washington had “grave concerns about the role of Hezbollah”, and described it as a designated terrorist organisation.

The US designated the group a terrorist organisation in 1997.

“It has siphoned off billions of dollars that should have gone into government coffers so that the government can provide basic services to its people,” Shea said in the interview.

“It has obstructed some of the economic reforms the Lebanese economy so desperately needs,” she added.

Last month, Hitti met with Shea after summoning her over her anti-Hezbollah remarks, but his office stressed that freedom of speech and reporting are “sacred rights”.

After the meeting, Shea framed the judge’s ruling as a “distraction” from Lebanon’s domestic crisis.

Lebanon’s economic crisis has led to a collapse of the local currency and purchasing power, plunging whole segments of society into poverty.

Earlier this year, Lebanon defaulted on its debt. The Lebanese pound remains pegged to the dollar but its value has plunged on the black market.

The government is currently in talks with the International Monetary Fund over a potential bail-out.