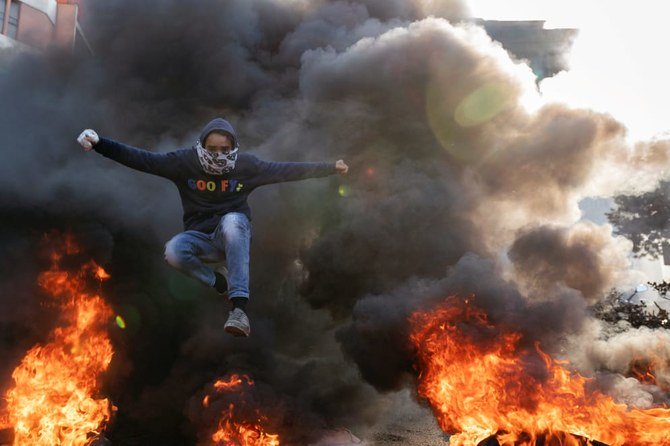 On the 90th day of the uprising, a protester jumps over burning tires used to block the road in Beirut’s Saifi district.
Share:

BEIRUT: The Washington-based Middle East Institute (MEI) launch this weekend its online exhibition “Lebanon Then and Now — Photography from 2006 to 2020”

The show, which runs until September 25, focuses on the lingering effects of Lebanon’s civil war, highlighted by the uprisings that began in the fall and continue today as Lebanon faces its worse post-war crisis amid economic and political chaos.

Rita Nammour, chairperson of the Beirut Museum of Art, USA and president of the Association for the Promotion and Exhibition of the Arts in Lebanon (APEAL), both of which collaborated with the Paris-based Institut du Monde Arabe (IMA) in partnership with MEI to co-produce the show, said that “Lebanon Then and Now” couldn’t be more timely.

“We are living in a nightmare,” she said. “Lebanon’s currency has been devalued to alarming levels and poverty is soaring. Hopes and dreams expressed in the early days of Lebanon’s protests appear shattered, but people are holding on.”

Nammour hopes the exhibition can “remind the world of Lebanon’s aspirations for a better future.”

The immersive virtual exhibition offers a tour of images captured by 17 photographers and a filmmaker that show the dizzying social, political, and economic upheavals that have rocked Lebanon for the past 16 years.

Lyne Sneige, director of the MEI Arts and Culture Center described the content of the show. “Some of Lebanon’s finest young photographers chronicle the tensions and the unresolved issues that led to the current crisis in response to the country’s political and financial collapse,” she said.

Lebanon-based curator Chantale Fahmi selected the images from two recent exhibitions: The IMA’s “Lebanon: Between Reality and Fiction,” which opened in Paris in September 2019 and APEAL’s “Revolt,” held in the heart of Beirut, which showcased large-scale reproductions mounted outside the dilapidated Egg — which Fahmi described as “the hollow ruin of a wartime cinema that became a hub for intellectuals, academics, activists and students seeking to make sense of a set of circumstances gripping the country by the throat.”

Fahmi sought to weave themes from the Paris and Beirut shows into a tapestry of suppressed and unaddressed injustices and war legacies. “The collection illuminates the power of photography, both artistic and journalistic, as a conveyor of reality and emotion,” she explained.

Fahmi added that Lebanon’s photography sector has been “developing in exciting way” over the past decade, with photographers working with foreign news agencies and taking advantage of Lebanon’s vibrant arts scene to nurture their talent.

Kate Seelye, vice president for arts and culture programs at MEI, said: “The recasting of the two exhibitions will deepen the understanding of how the past informs and shapes the present. Additionally, this show speaks to the importance of international collaborations, as galleries like ours seek to replace physical audiences with global eyeballs for now.”