Israelis protest against govt over hardship caused by Coronavirus 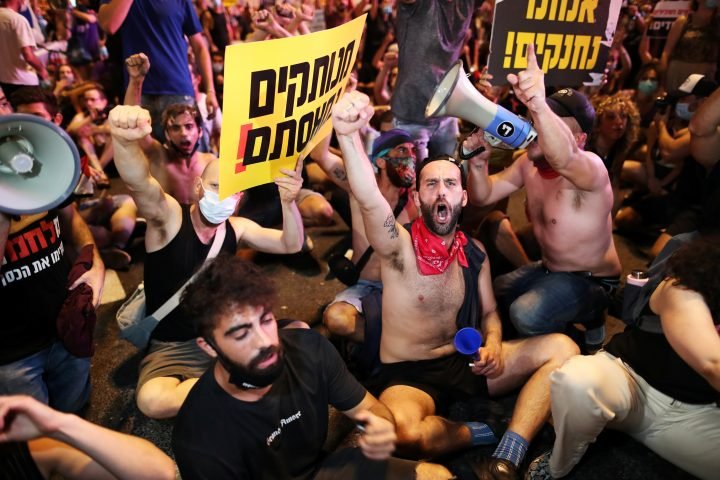 Thousands of Israelis streamed into Tel Aviv’s Rabin Square to protest Saturday against the government’s handling of economic hardship caused by coronavirus curbs.

About 300 officers were deployed in the square, a traditional protest site, to ensure public order and monitor social distancing regulations, police said.

Many participants wore facemasks but most appeared to be less than the statutory two metres (yards) apart.

Some held banners reading in Hebrew: “Let us breathe” — an echo of worldwide protests sparked by the death of George Floyd, an unarmed black man, during a US police arrest.

The event was organised by self-employed, small business and performing artists’ groups angry at coronavirus curbs which have taken away their livelihoods.

Student unions also took part over the large numbers of young people made jobless by closures.

Israel imposed a broad lockdown from the middle of March, allowing only staff deemed essential to go to work and banning public assembly.

Places of entertainment were closed, hitting the leisure industry hard.

Facing public and economic pressure, the government eased restrictions in late May.

But infections have mounted and rules tightened again, including the closure of event venues, clubs, bars, gyms and public pools.

While salaried workers sent on furlough received unemployment benefits, the self-employed said most had been waiting months for promised government aid.

“There is a very grave crisis of confidence between us and the government,” Shai Berman, one of the protest organisers told Israeli public radio ahead of the rally.

“We are part of a very large public which is feeling growing distress and wants to demonstrate and simply does not believe the promises,” he added.

Berman was among activists invited Friday to meet Prime Minister Benjamin Netanyahu and finance ministry officials in a last-minute government effort to stave off the protest.

“He tried, very politely,” Berman said, adding that an aid package presented at the meeting was a start, but flawed.

“We will meet our commitments including hastening the immediate payments that we want to give you,” his office quoted him as telling the activists.

On Friday, the health ministry announced the highest number of coronavirus infections over a 24-hour period, with nearly 1,500 new cases confirmed.

The country of roughly nine million has now registered more than 37,000 cases, including over 350 deaths.