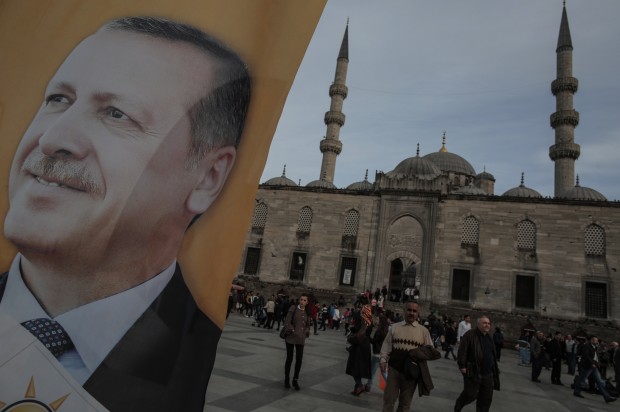 A poster of Turkish president Recep Tayyip Erdogan is seen in an election billboard of his Justice and Development Party with a mosque in the background in Istanbul, Turkey
Share:

By MARC CHAMPION AND CONSTANTINE COURCOULAS

To President Recep Tayyip Erdogan and his religious conservative supporters, the reconversion of the Hagia Sophia to a mosque is a milestone in Turkey’s rebirth as a powerful, Muslim nation after a century of misguided efforts to imitate the Christian West.

Opponents of the move – at home and abroad – see it as the latest dramatic evidence that a less secular and tolerant Turkish state has emerged on Erdogan’s watch.

“To convert it back into a mosque is to say to the rest of the world, ‘Unfortunately we are not secular any more’,” Orhan Pamuk, the Nobel Prize-winning Turkish novelist, told BBC News. “There are millions of secular Turks like me who are crying against this, but their voices are not heard.”

The Byzantine cathedral has seen its status shift on two previous occasions in the past millennium, both of them momentous junctures for the region. It was turned from a Christian church into a mosque after the Ottoman conquest of Constantinople, now Istanbul – and from mosque to museum in 1934, as part of Mustafa Kemal Ataturk’s efforts to secularize his new Turkish Republic.

Friday’ court ruling, which annulled Ataturk’s move, was less dramatic than the fall of Byzantium. Still, Erdogan – an Islamist who’s governed Turkey for almost two decades – sought to frame it as a hinge of history.

“The revival of Hagia Sophia is the harbinger of freedom of Al-Aqsa and the footsteps of Muslims emerging from the era of interregnum,” the Turkish president said late Friday, referring to the mosque in Jerusalem that many Muslims consider under occupation.

Erdogan will open the Hagia Sophia to worship on July 24, the anniversary of the 1923 treaty that established Turkey’s current borders. That settlement was long considered a victory by Turks, but lately Erdogan has criticized it for ceding territory and robbing Turkey of its rightful status as a great power.

On Friday evening, thousands prayed outside the building, many crying with emotion at the symbolic triumph.

For Turkey’s religious conservatives, “converting the Hagia Sophia is the ultimate moment,” said Mustafa Akyol, a senior fellow specializing in Islam and modernity at the Cato Institute, a Washington think tank.

Hagia Sofia isn’t the only cathedral or mosque to have been converted. In Cordoba, for centuries a center of Islamic rule in Spain, the great mosque was made over to Christianity with a cathedral built at its heart after the region’s reconquest in the 13th century.

One possible difference, according to Akyol, is that Muslim imagery remains for all to see in Cordoba. Islam does not permit Christian-style depictions, and it remains unclear whether some of the Hagia Sophia’s iconography, whitewashed by the Ottomans and uncovered in 1934, will be hidden once more.

Erdogan said in Friday’s address that the building would “maintain its status as a cultural heritage of humanity.”

The decision has been a long time coming. And like Ataturk’s museum conversion — which helped smooth the path to a defense pact with Greece, at a time of rising military threats in Europe – the timing was political. Erdogan’s popularity has been sagging under the weight of a damaged economy, and conservative rivals threaten to eat into his vote.

Today, though, Erdogan’s move is more likely to damage already difficult relations with Greece, for which the Hagia Sophia carries a special significance as one of the most important Orthodox Christian monuments. Tensions between the two countries have been rising already over rights to energy exploration in the Mediterranean.

Greek Prime Minister Kyriakos Mitsotakis condemned the decision in a statement Friday night, saying it affected “not only Turkey’s relations with Greece, but also its relations with the European Union, UNESCO and the global community.”

Hagia Sophia is on UNESCO’s World Heritage list and the organization said it “deeply regrets” the decision by the Turkish authorities. The EU also described Erdogan’s move as “regrettable.”

“It really is in many ways a shocking decision,” said James Ker-Lindsay, a visiting professor at the London School of Economics, who focuses on security in southeast Europe. “It just contributes to the downward spiral in relations between Athens and Ankara that we’ve been seeing in recent years, and this is calculated to remove any remaining levels of trust.”