Republicans increasingly split with Trump as his polls drag 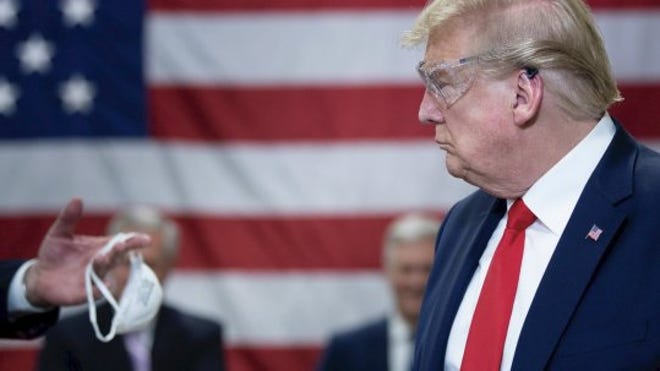 President Trump’s anti-mask crusade is coming back to bite him. His political allies have been urging him to wear one , increasingly split with him as his polls drag
Share:

WASHINGTON – Weeks before President Donald Trump accepts his party’s nomination, cracks are deepening within the party as a host of GOP lawmakers distance themselves from the Republican standard bearer as they weigh their election chances in November.

Republicans have increasingly split with Trump on a host of issues shadowing his administration, from his tone on racism and the removal of Confederate statues, to wearing a face mask amid the coronavirus pandemic and questions over intelligence reports of a Russia-backed bounty program on U.S. troops in Afghanistan.

It’s a rare moment in the president’s three-and-a-half-year tenure, during which Trump otherwise relished inparty unity on issues such as his impeachment and former special counsel Robert Mueller’s Russia investigation.

“There’s a real disagreement between the president and his party in this election,” said Alex Conant, a GOP strategist and former aide to Sen. Marco Rubio, R-Fla. “I think a lot of Republicans are really fed up with the president’s divisive strategy. People are just throwing up their hands with some of the rhetoric that’s coming out of the president. It’s really unhelpful not just to his own re-election, but also to keeping the Senate.”

Earlier this week, several GOP lawmakers said they plan to skip the party’s national convention in Jacksonville, Florida, where coronavirus cases have surged, leaving supporters, politicians and officials who plan to attend with the hard choice of risking their personal health or facing potential retaliation from the president.

Senate Majority Leader Mitch McConnell, R-Ky., called the convention a “challenging situation” when asked whether he plans to attend.

“We’ll have to wait and see how things look in late August to determine whether or not we can safely convene with that many people,” he said Thursday.

The Trump campaign had hoped to test those waters this weekend with a campaign rally at a New Hampshire airport hangar, but the campaign announced it would postpone the rally over the approaching Tropical Storm Fay, according to White House officials. The campaign snag comes after turnout at a June rally held inside an Oklahoma arena fell short of expectations amid an increase in COVID-19 cases across the state. Tulsa health officials said Wednesday that the rally and surrounding protests likely contributed to the city’s recent surge in cases.

New Hampshire’s Republican Gov. Chris Sununu is another GOP politician who has been willing to break with the president over his pandemic messaging when it collides with his state’s interests. Sununu has had to walk a careful line in defending the president’s rally while enforcing his own reopening guidelines. The Republican governor had planned to greet Trump in New Hampshire, but skip the rally over coronavirus fears.

The Republican party moved its convention from Charlotte, North Carolina, last month after state and local officials refused to commit to the president’s desire to hold a full convention, packed with thousands of supporters, over health concerns amid the ongoing pandemic.

But aside from coronavirus concerns, the Republican convention may have lost its luster for some lawmakers, according to GOP strategist Matt Gorman.

“For a lot of these elected officials, it’s a chance to go there for fundraising and press attention,” he said. “And if a lot of media folks are not planning to go and a lot of donors choose not to go because in-person fundraising is a bit less prevalent, then there’s not much incentive to show up.”

Gorman said he doesn’t think the list of senators avoiding the convention will draw the president’s ire, noting that several lawmakers skipped the event in 2016 in protest – including Sen. Lindsey Graham, R-S.C., now a key Trump ally.

The president has since softened his tone about holding a traditional convention, telling television host Greta Van Susteren this week that “it really depends on timing.”

“We can do a lot of things, but we’re very flexible,” he said of convention plans.

Jacksonville has emerged as one of the nation’s biggest hotspots for the coronavirus. The Department of Health and Human Services announced TuesdayJacksonville would be one of three cities designated for a testing “surge” to make more tests available in the hardest hit areas.

The administration’s mounting controversies have pushed even Republicans who previously refused to break ranks with Trump to begin speaking out – most notably as it relates to the dramatic uptick in coronavirus cases in the U.S.

They have been vocal in their opposition to his refusal to wear a mask, pressuring the administration for increased testing and, most recently, some have criticized Trump for pulling out of the World Health Organization as the pandemic continues to ravage the country.

“I disagree with the president’s decision,” Alexander, a Tennessee Republican, said after the president pulled the U.S. from WHO, noting that while mistakes of the WHO should be examined, “the time to do that is after the crisis has been dealt with, not in the middle of it. Withdrawing U.S. membership could, among other things, interfere with clinical trials that are essential to the development of vaccines.”

Even some of the president’s closest allies on Capitol Hill in recent weeks have been critical as Trump’s poll numbers, already hit by the pandemic, continue to plummet amid a national reckoning over policing, race and America’s Confederate history.

Aides and allies have urged the president to change his tone as the nation both grieves the death of George Floyd after he was killed by a Minneapolis police officer, and protesters call for change to racially fraught policies. The president has instead stoked division, threatening to use the military against demonstrators and using Independence Day speeches to defend Confederate monuments and dismiss protesters as “Marxists.”

“The country is looking for healing and calm. And I think the president needs to project that in his tone,” said Sen. John Thune, the Senate’s No. 2 Republican. “He masters that sometimes, and that’s the tone he needs to strike right now.”

Trump’s handling of the protests even led to Sen. Lisa Murkowski, R-Alaska, leaving the door open to voting against the president in November. “I am struggling with it,” she said when asked by reporters whether she would continue to support Trump. “I have struggled with it for a long time.”

Trump has drawn the ire of even of his most ardent supporters with his some of his racially polarizing comments.

Most recently, after Trump criticized NASCAR for banning the Confederate flag and called for Bubba Wallace, one of the sport’s only Black drivers, to apologize after the FBI said a noose found in his garage wasn’t targeting the driver, Graham, a fierce defender of the president, pushed back.

“I don’t think Bubba Wallace has anything to apologize for,” Graham told Fox News Radio. “I’ve lived in South Carolina all my life and if you’re in business, the Confederate flag is not a good way to grow your business.”

Senate Republicans have largely ignored the president’s threat to veto a defense spending bill over an amendment to rename Army bases named for Confederate figures. The proposal, sponsored by former 2020 Democratic contender Sen. Elizabeth Warren, D-Mass., has gained a groundswell of support from prominent Republicans, including Sen. Chuck Grassley, R-Iowa, who warned earlier this week that Congress would “probably override” Trump’s veto.

While the president has drawn a line on removing memorials honoring Confederate leaders and controversial historical figures, Republican attitudes appeared to have shifted since protests over racial inequality first unfolded in May.

“There shouldn’t be a knee-jerk reaction to renaming bases,” Grassley said Monday. “And I imagine that in my lifetime, there’s been a lot of bases that have had their names changed. I’m not aware of it. But the extent to which it’s a thoughtful process and not a knee-jerk reaction, I wouldn’t have any objection to it.”

Trump has issued eight vetoes during his presidency, and none have been overridden by Congress.

Rep. Liz Cheney, R-Wy., has made a habit of marking her differences with the president over his term, especially when it comes to foreign policy, and has continued to speak up throughout the latest controversies. After the president refused to wear a face mask in public, Cheney tweeted a photo of her father Dick Cheney in a mask with the hashtag #realmenwearmasks.

Republicans like Cheney know the risks of speaking out and the potential for a lashing from the president’s Twitter account. But history has shown the president is less likely to go after loyal lawmakers who disagree with him on occasion, as he typically targets those who attack him personally or could imperil his re-election chances, such as those who have voiced openness to voting against him or weren’t unilaterally behind him during his impeachment.

“My sense is that Trump is fine with Republicans criticizing his policy, even his tweets, but he’s not OK with them attacking him,” said Conant.

Congressional Republicans say the critiques of the president aren’t part of a trend but more of a reaction to specific instances worthy of criticism, rejecting the notion that it’s a showing of division within the party but rather an attempt to get the president back on track and on message. Though privately, many wonder whether public criticisms will alter the president’s conduct.

Trump’s propensity for fiery Twitter missives has been notably absent amid the wave of GOP criticism. Part of that calculation may be focusing attacks on Democrats with just four months until Election Day, Gorman said.

“I think not just him, but also his team, know that the people we need to be going after right now are Democrats and he has been pretty consistent with that,” he said. “So I think there is a calculation that Republicans doing well down ballot helps him and vice versa.”

Republicans keeping Trump at an arm’s distance must also reckon with his dwindling poll numbers as November approaches.

Polls have similarly not been good for Senate Republicans, who hold a three-seat majority and are fending off serious challenges in more than five states. A slew of recent polls show Democrats leading in Maine, Arizona, North Carolina, Iowa, Colorado and Montana, which has left incumbents in an uncomfortable position as they wrestle with the barrage of controversies surrounding the president.

Incumbents have employed varying strategies, some tying their fate to Trump while others distance themselves from the president – a heavy feat as he sits atop the ticket.

Several have attempted to steer clear of weighing in on the president’s conduct while others, such as Sen. Susan Collins, R-Maine, have repeatedly criticized the president in recent weeks, including Trump’s clearing of protesters outside the White House in early June.

Still, some Republicans acknowledge that Trump is a political unicorn and while his tactics are far from traditional and frequently attract fierce criticism, he has weathered many storms – a trend that could continue as November nears.

“Every time I think that he’s miscalculated, he comes out on the winning side of it,” Sen. Kevin Cramer, R-N.D., told the Wall Street Journal when asked about the president’s rhetoric on Confederate history. “The thing the president is credited with, appropriately, is really good instincts.”