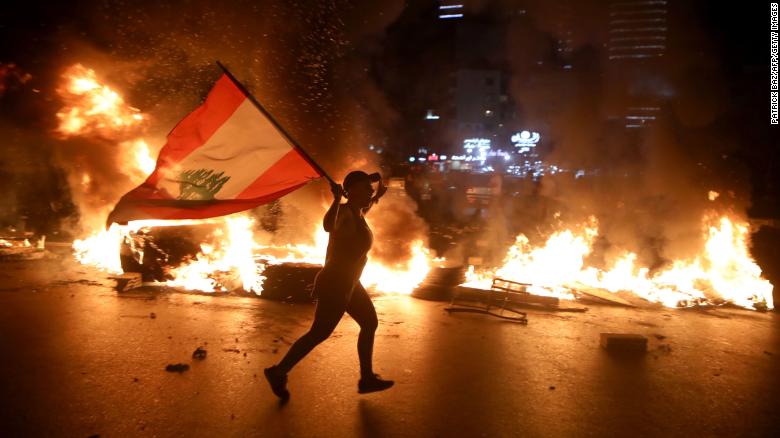 TOPSHOT – A protester holding the Lebanese flag runs as protesters block the Jounieh Tripoli highway with flaming tires set aflame during a demonstration against dire economic conditions in Jal el Dib North East of the Lebanese capital Beirut late on June 11, 2020. – The Lebanese pound sank to a record low on the black market on June 11 despite the authorities’ attempts to halt the plunge of the crisis-hit country’s currency, money changers said. Lebanon is in the grips of its worst economic turmoil in decades, and holding talks with the International Monetary Fund towards securing billions in aid to help overcome it. (Photo by Patrick BAZ / AFP) (Photo by PATRICK BAZ/AFP via Getty Images)
Share:

Michelle Bachelet, the United Nations High Commissioner for Human Rights, said the social fabric of the country was at risk as vulnerable populations are threatened with extreme poverty.

“This situation is fast spiralling out of control, with many already destitute and facing starvation as a direct result of this crisis,” she said in a statement.

“The alarm has been sounded, and we must respond immediately before it is too late.”

For months, the Mediterranean country has grappled with its worst economic crisis since the 1975-1990 civil war.

Tens of thousands have lost their jobs or part of their salaries, while a crippling dollar shortage has sparked spiralling inflation.

Bachelet said an unemployment crisis would propel poverty and indebtedness with “grave implications” in a country with fragile social nets.

She said vulnerable Lebanese, along with 1.7 million refugees, were increasingly unable to meet their basic needs, as were 250,000 migrant workers, many of whom have lost their jobs or been left homeless.

“Their situation will only get worse as food and medical imports dry up,” the former Chilean president said.

“As we respond to this pandemic and the socio-economic crisis, we must include and protect everyone, regardless of their migration or other status.”

The Lebanese pound, officially pegged at 1,507 pounds to the dollar, reached more than 9,000 to the dollar last week on the black market in a dizzying devaluation.

Prices have soared almost as fast as the exchange rate has plummeted, meaning that a salary of one million pounds is now worth a little more than $100, compared with almost $700 last year.

After the country for the first time defaulted on its sovereign debt in March, the government pledged reforms and in May started talks with the International Monetary Fund towards unlocking billions of dollars in aid.

But after 16 meetings, negotiations between Beirut and the IMF are deadlocked, while leaders are reluctant to enact reforms.

The rights chief also called on the international community to ramp up its help.

“Without strengthened social safety nets and bolstered basic assistance to ease the pain caused by required structural reform, vulnerable Lebanese, migrant workers and refugees will be pushed further into poverty and extreme poverty,” she said