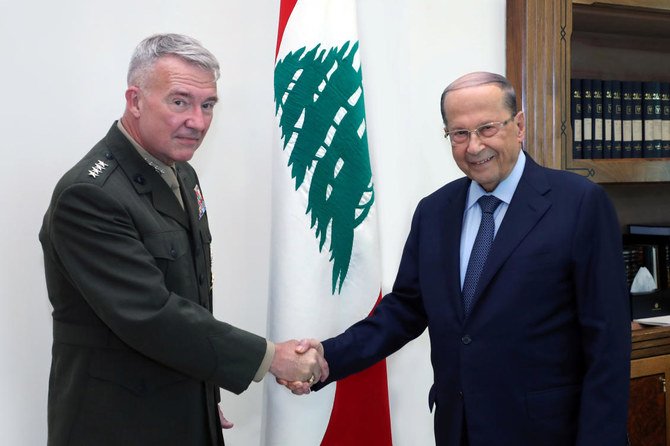 BEIRUT (Reuters) – A U.S. general voiced Washington’s backing for Lebanese stability on Wednesday on a visit that triggered a protest by demonstrators including supporters of the Iran-backed Hezbollah against U.S. policies in the country.

Lebanon is in throes of an acute financial crisis seen as the biggest threat to its stability since the 1975-90 civil war.

The heavily armed Hezbollah, founded by Iran’s Revolutionary Guards in 1982, is classified as a terrorist group by the United States. It is also a major player in Lebanese politics and backs the government of Prime Minister Hassan Diab.

These included a rejection of a U.S. embassy plan to hold a memorial for 241 U.S. service personnel killed in 1983 by a bomb attack in Beirut during McKenzie’s visit, an al-Manar broadcaster said.

The U.S. embassy statement said McKenzie’s one-day visit included “a brief stop at memorials honouring the memory of those who have perished in service to their country”.

The United States says Hezbollah carried out the 1983 attack, which was preceded by the bombing of the U.S. embassy in Beirut.

Hezbollah leader Hassan Nasrallah, in a speech on Tuesday night, said Shea had intervened in official appointments at the central bank, calling this “colonial” behaviour.

Shea has said the appointments were a matter for Lebanon to decide and she tried her best to convey the importance of credible and internationally respected experts being appointed.