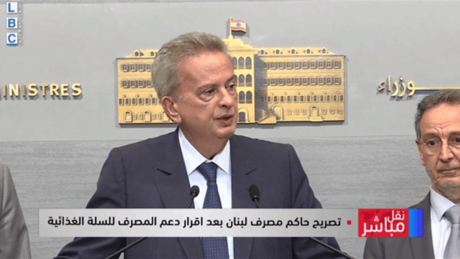 Economy Minister Raoul Nehme announced during a press conference at the Grand Serail , in the presence of Governor Riad Salameh that the central bank will subsidize the items at an exchange rate of LBP 3,900.
Share:

A deal has reportedly been finalized between the government and the central bank on subsidizing 300 items of essential foodstuffs , including red meat

Economy Minister Raoul Nehme announced during a press conference at the Grand Serail , in the presence of Governor Riad Salameh that the central bank will subsidize the items at an exchange rate of LBP 3,900.

A leaked list of the items shows red meat to be among the subsidized items.

Nehme said the aim behind the broad list of subsidized items is “securing the majority of essential goods to citizens at low prices and boosting the purchase power.”

This development comes after the Lebanese pound (lira) collapsed and approached an exchange rate of 10, 000 LL against the US dollar

Central Bank Governor Riad Salameh revealed that the “ LBP 1,500 rate will remain valid for (the import of) medicine, wheat, fuel and essential goods ” and promised to unifty the exchange rate

Economists have been urging Salameh to unify the Lira exchange rate but so far he has resisted the move and continues to dream up exchange rates on regular basis.

Commenting on the subsidy of red meat one analyst told Ya Libnan ,” the governor and PM Diab like to have a steak every now and then”, adding “mind you this is stolen money from the depositors ” .

Depositors can no longer access their dollar deposits in Lebanon . They can only withdraw funds in Lebanese ;pounds at a rate of 3000 LL per US dollar while the dollar at the black market is as high as 10,000LL.

The analyst added : “Suppose you want to buy a $1000 airline ticket using your dollar deposits. You have to withdraw 10 million Lebanese pounds to be able to buy the dollars on the black market . So the $1000 ticket will actually cost you $3333, resulting in a total loss of $2333 to the depositor , while people like Salameh and Diab can still enjoy their steak at the expense of the depositors . To say this is highway robbery is an understatement” he added

The analyst added: “The strange part here is Lebanon is subsidizing these items and as soon as they land here they are being smuggled to Syria using the illegal border crossings . This is why we have a shortage of wheat flour diesel and medicine in Lebanon “