Lebanon is weak because Hezbollah is strong 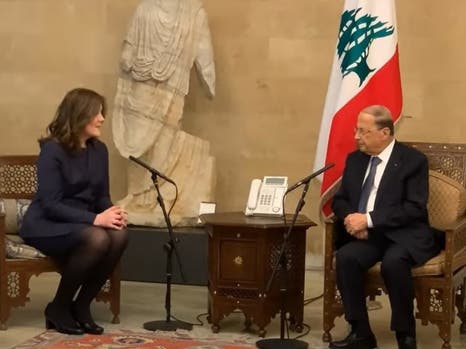 File photo : US Ambassador Dorothy Shea is shown with President Michel Aoun at the presidential palace . A senior Presidential office official blasted the South Lebanon judge over his ban . “This judge should get a warning of some sorts from the Higher Judicial Council,”he said . According to the official, the Lebanese government reached out to the ambassador to apologize and dismiss the order
Share:

An American political scientist recently described to me his memories of the bombing of the US Embassy in Beirut in April 1983 and the attack on the barracks in the Lebanese capital that killed more than 240 US Marines and servicemen in October of the same year. He said they were terrifying acts of terrorism for millions of Americans. He added of Hezbollah and the other radical groups that were responsible for these terror attacks: “Their barbarism and lust for killing were indicated to the world, and their criminality against Lebanon and the Lebanese people were stamped on the life of this great nation.” Sadly, this statement holds true almost 40 years on from these attacks because Hezbollah has been and will be the primary instrument used by Iran to destroy Lebanon and wreak havoc throughout the Middle East.

Lebanon’s economic misery is agonizing and the country’s political dilemma is appalling. Due to Hezbollah’s intrusion on the Lebanese system of government, demonstrations have been ongoing since last October, with the people demanding better living conditions, an end to corruption, the provision of more services, and serious long-term political reform.

In April, the new Lebanese Cabinet approved a five-year economic recovery plan in a bid to lift the country out of the economic doldrums. Lebanon cannot afford to pay its foreign debt. The protests continue and show no signs of abating. In addition, the government is negotiating plans for assistance with the World Bank and the International Monetary Fund. In return for their assistance, these international economic institutions will demand serious reforms in Lebanon’s state and society.

The group that aspires to harm Lebanon is the force that works to scuttle any chance of these organizations helping the country get over its economic problems. This means Hezbollah. To a large extent, the US wants Lebanon to gain global confidence in its ability to return to good economic performance. Hezbollah is the major obstacle for Lebanon’s economic excellence because it is draining the country’s reserves of dollars and sending them to Syria, Iraq and Iran.

Historically, America has always helped Lebanon. In 1958, it preserved its sovereignty against the scheme to incorporate it into the Egyptian-Syrian entity known as the United Arab Republic. It supported the denominational system of government, yet always encouraged its reform and adaptability to political changes. It also endorsed the Cedar Revolution of 2005. In another example, current US Ambassador to Lebanon Dorothy Shea did not fail to grasp the terror of Hezbollah when she stated recently that it is a terror organization that is not working in the interests of Lebanon.

In an interview with the TV station Al-Hadath last month, Shea described the party as “a designated terrorist organization” and stated that her country had “grave concerns” about its role. “It has siphoned off billions of dollars that should have gone into government coffers so that the government can provide basic services to its people,” she said, adding that “it has obstructed some of the economic reforms the Lebanese economy so desperately needs.” A pro-Hezbollah judge responded by issuing an order to restrict the American ambassador’s access to media outlets, but the government soon rescinded that verdict and apologized to the US.

Shea was appealing for the Lebanese leaders to impose sanctions on Hezbollah themselves. She was trying to delegitimize Hezbollah from the trappings of power it has assumed. However, many are asking whether the American ambassador could have presented her argument in a more forceful way, such as by threatening to punish Hezbollah if it violates the new US Caesar Act against Syria. Perhaps other American officials will soon provide more evidence of the contacts between Hezbollah and terror groups and their global drug trafficking activities. America is fighting for the return of conditions that will make Lebanon stable and prosperous once again. Iran and Hezbollah, meanwhile, are determined to keep Lebanon in its current situation so they can maintain their present subordination of the country.

Lebanon is weak because Hezbollah is strong. As the American political scientist I was talking to while writing this article said: “There is no salvation for Lebanon except by disarming Hezbollah, applying UN Security Council resolution 1559, and in putting on trial the killers of Rafik Hariri. (Hezbollah Secretary-General) Hassan Nasrallah should be prosecuted in accordance with international justice.”