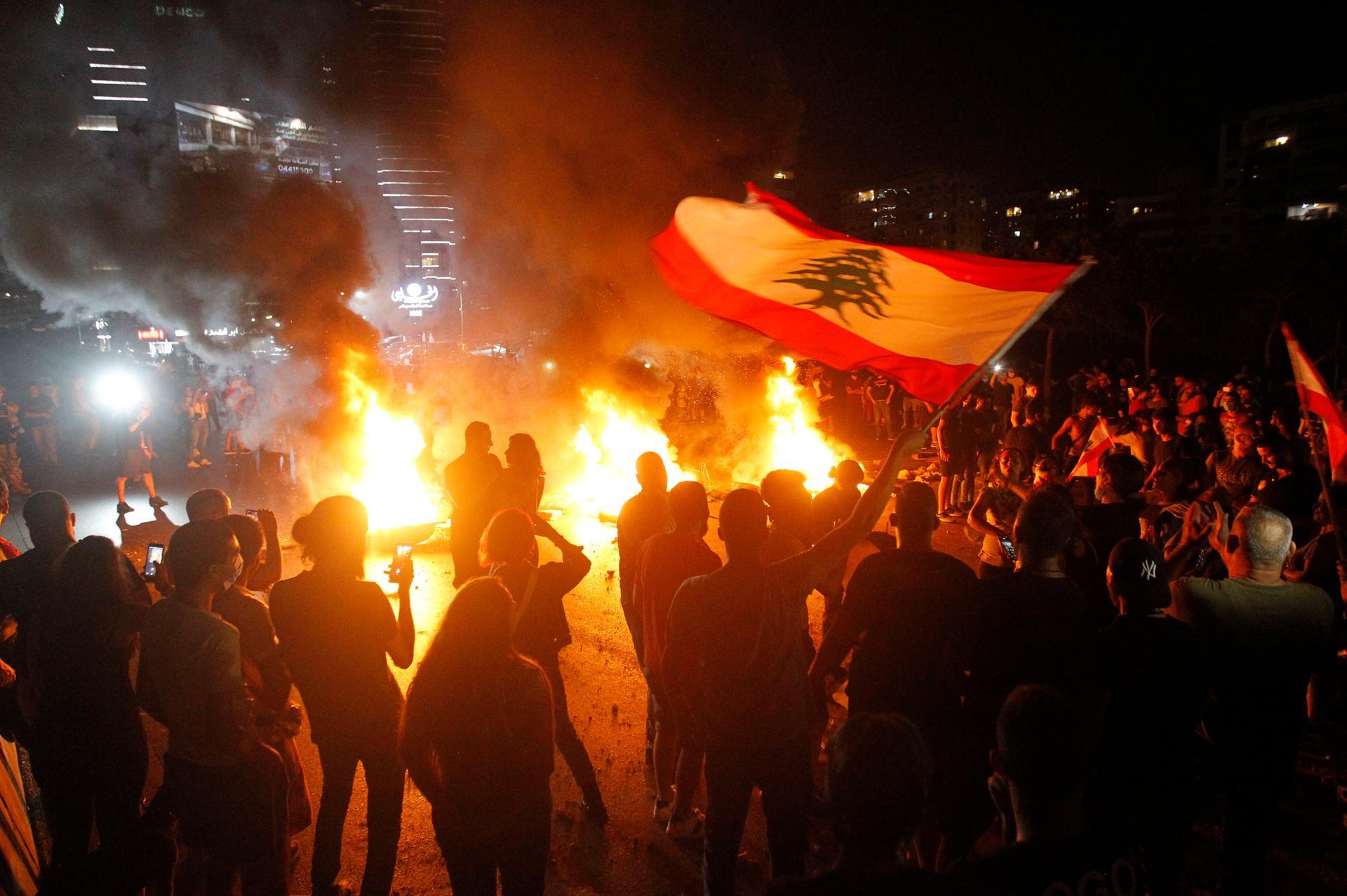 Anti-government protesters carry Lebanese flags and burn tires as they block the main highway in north of Beirut during a protest over deteriorating living conditions. EPA
Share:

Government members have questioned the “benefit of continuing in light of the lack of achievements by Hassan Diab’s cabinet The government has not been able to contain the Lebanese pound’s free fall and soaring unemployment and inflation. Lebanon is also suffering from a major fuel and diesel shortage which has dramatically reduced electricity output.

Lebanese politicians have called for the resignation of the government as the country’s financial collapse deepens, with some pushing for former prime minister Saad Hariri to make a comeback.

“A government change is possible at any moment and in any circumstance,” Minister of the Displaced Ghada Shreim said in an interview on the Voice of Lebanon radio station on Saturday. “What is important is to find solutions to save the country.”

Government members have questioned the “benefit of continuing in light of the lack of achievements”, Energy Minister Raymond Ghajar said in a separate interview with the station.

Both ministers were appointed with the support of President Michel Aoun’s political party, the Free Patriotic Movement.

Mr Ghajar said cabinet members, including Prime Minister Hassan Diab, were not against a change of government if it “improves the country’s situation”, complaining that it must “carry the burden of dozens of years of policies that brought the country to the brink of the abyss”.

The current government was formed in late January, three months after the resignation of former prime minister Saad Hariri amid nationwide protests triggered by the country’s worst economic crisis.

Mr Diab’s government vowed that it was apolitical and that it would tackle corruption and shore up international support for the country.

But politicians quickly reverted to bickering. Bailout negotiations with the International Monetary Fund were paused recently as Lebanese officials could not agree on the size of the losses in the country’s banking sector.

The government has not been able to contain the Lebanese pound’s free fall and soaring unemployment and inflation. Lebanon is also suffering from a major fuel and diesel shortage which has dramatically reduced electricity output.

Deputy Parliament Speaker Elie Ferzli, who is close to the FPM and its allies Hezbollah and Amal, said after a meeting with Mr Hariri on Thursday that “reconsidering the government composition has become necessary”.

Calling Mr Hariri a “real and true” component of Lebanese society, he said “we all agree that Prime Minister Saad Hariri is one of the main gateways, and even the main gateway, to reunite the Lebanese”.

Political analyst Imad Salamey told The National there was little chance that Mr Hariri would return to the premiership, which is always held by a Sunni Muslim to maintain Lebanon’s fragile sectarian balance.

“Hariri is conditioning [his return] on a government that is free from Hezbollah and the Free Patriotic Movement and that consists primarily of technocrats. Conditions are not ripe enough for Hezbollah to accept this,” he said.

“Instead, I think that right now we would have a more transitional type of government that can prepare for the 2022 parliamentary, presidential and municipal elections while stabilising the economy the best it can.”

Iran-backed Hezbollah and its allies backed Mr Diab’s government at first but are becoming increasingly vocal in their criticism. Observers believe Hezbollah’s support has discouraged the West and Gulf states from bailing Lebanon out.

Although it is highly popular among Lebanon’s Shiite Muslim population, Hezbollah is considered a terrorist organisation by the US and other countries including Gulf states.

The UAE Minister of State for Foreign Affairs, Dr Anwar Gargash, said last month that Lebanon had burnt its bridges with Gulf states by allowing Hezbollah’s influence to grow, and that it would only provide support in concert with other countries.

Ms Shreim on Saturday called for Gulf countries to provide financial support to her country, saying that “the Arab Gulf has always stood next to Lebanon”.