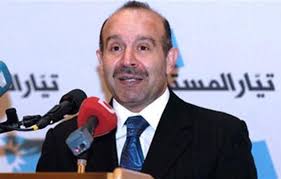 Hariri heads up the Future Movement.

“We are against the return of Hariri or any figure representing Future Movement (to the premier post) without securing choices that at least begin with returning to the Baabda Declaration and reforming the electricity sector,” Alloush said .

He also described Hezbollah as a “militia.”

“It cannot be viewed as a political party and no settlement can be reached with it,” Alloush added.

Hezbollah is listed as a terrorist group by many countries in including the United States and several Arab countries.

The main gateway for this contacting the political leaders who truly represent the components of the Lebanese society. We all agree that former PM Saad Hariri is one of the main gateways, or rather the main gateway, for creating Lebanese unity,” Ferzli told reporters after the talks.

Asked whether there should be a governmental change, Ferzli said: “My personal opinion, and with all due respect to the head and members of the incumbent government, is that a reevaluation of the government’s structure has become necessary.”

“I even urge Mr. Prime Minister (Hassan) Diab to exert efforts to facilitate the formation of an alternative government that would contribute to finding solutions for the Lebanese society,” Ferzli said

“Hezbollah has broken the agreements, which prevented the implementation of the state’s pledges, caused its deadly isolation, made it lose its credibility and the confidence of friendly countries and Lebanese living abroad, made it lose investors, depositors and tourists, which have all contributed to the decline of the national currency,” Suleiman declared.

The Baabda Declaration was issued in June 2012 following a national dialogue session and it calls for neutralizing Lebanon from the policies of regional axes except for issues related to Arab consensus and the Palestinian cause.

In a related development , a number of protesters gathered outside the embassy of the United States in Awkar on Saturday demanding the implementation of UN Resolution 1559, as army and security forces deployed in the area and blocked the road leading to the embassy with barbed wire, the National News Agency reported .

The demonstrators raised the Lebanese and American flags, and delivered a “thank you” letter to the embassy representative for the American stances in support of Lebanon and its army.

They called on the US to “assist in implementing international resolutions, especially 1559,” added NNA.

The sit-in came in line with the US Independence Day.

“There is no salvation for Lebanon except by dissolving and disarming the militias, restricting weapons to the army, restricting the decision for war and peace to the state, and extending its authority over all Lebanese territory,” they said.

United Nations Resolution 1559 was passed back in 2004 calling, among other things, for the disarmament of Hezbollah, which is the only militia that’s allowed by Syria to keep its arms after the civil war .