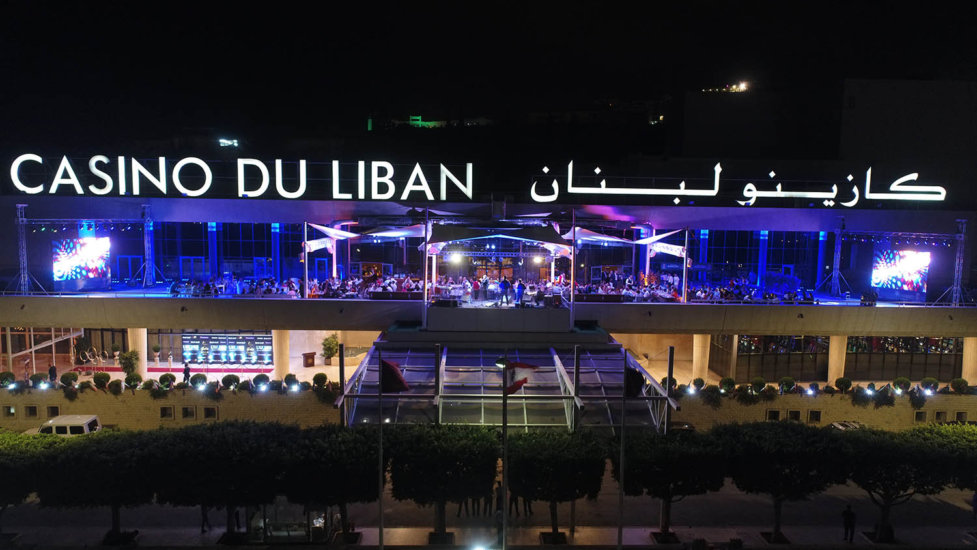 When business is good, the prized casino is a cash cow for the flagging state. But with the economy in freefall, the government needs ways to raise funds fast

Maameltein- Lebanon’s iconic Casino du Liban was once where the richest of the region came to play. Standing on the cliffs above the Mediterranean, 20 kilometres north of Beirut, it has been dubbed as the Monte Carlo of the Middle East.

Though much-loved and revered as a monument to Lebanon’s better days, the casino, which is part-owned by the state, could find itself soon out of the public’s hands.

Lebanon’s economy is in freefall. The currency has lost some 80 percent of its value in recent months and officials are eyeing ways to raise liquidity, including selling off some of the state’s most prized assets, such as the casino.

Like the rest of the country, Casino du Liban is emerging from a coronavirus lockdown. A disinfectant booth greets visitors at the entrance, and men in jumpsuits busy themselves outside, preparing for another round of sanitisation.

Portraits of former Lebanese heads of states and international celebrities in the entrance hall put the casino front and centre of the country and region’s history.

Lebanon’s casino has hosted a slew of high-ranking officials and celebrities, including the shahs of Iran, King Abdullah of Jordan, and even Osama bin Laden.

It was considered “impressive culturally, but also socially”, Mona Fawaz, professor of urban studies and planning at the American University of Beirut, told MEE.

But aside from flaunting social status and enjoying cultural events, it was also a place to do business and “meet important people”, she said.

Nothing of the sort has been possible in recent months, however. Coronavirus forced an 80-day closure, and though scores of mask-wearing men and women can be seen playing the slot machines, the casino’s restaurants are still shut, as are other gaming areas.

The return of income will be welcome to Casino du Liban, as well as the government.

Casino du Liban, 52 percent of which is owned by a joint-stock company with government shares, is a cash cow for the Lebanese state.

The remaining 15 and 32 percent are owned by Abela Tourism and Development Company and unnamed private investors, respectively.

Having just opened at a reduced capacity on 1 June as Lebanon’s Covid-19 lockdown eases, it has been a race against time to generate new revenue.

The casino has been working on launching an online gambling platform and opening a bingo hall to diversify its customer base, as the economy continues to take a turn for the worse.

“Online [gambling] can be a source of fresh money into the country,” chairman and general manager Roland Khoury told MEE with cautious optimism.

“This is especially with the Lebanese diaspora; those who want to play and gamble can go to Casino du Liban’s platform.”

Coronavirus hasn’t been the casino’s only woe.

The business saw a staggering $12m drop in revenues less than a month into the country’s popular uprising, which was sparked last October by a currency crisis, rampant corruption, high unemployment and political stagnation.

Khoury has previously blamed the drop in custom on roadblocks, a common tactic used by protestors, which he said made it difficult for casino staff and customers alike to arrive.

It was only able to function at a partial capacity until President Michel Aoun called the CEO in March, asking him to close the casino to prevent the spread of Covid-19, days before the country went into lockdown.

With revenues drying up, officials have begun wondering whether it wouldn’t be better to just sell up altogether.

Sitting in his office overlooking the green foothills of Mount Lebanon and the arching Jounieh Bay, Khoury tells MEE that it had been a “dream” of his to run the casino, but the period before he took over was marred by mismanagement.

“The first day I arrived, I wanted to leave – no really,” he says, laughing in disbelief. “There were those red plastic buckets collecting water dropping from the air conditioners everywhere, like the ones your mother would use to clean the floors at home.”

The six years preceding Khoury at Casino du Liban were marked by freefalling revenue and skyrocketing costs, and a decline in tourism, especially from wealthy nationals that frequently tried their luck at the casino.

But there were also allegations of rampant corruption with the previous administration of Casino du Liban via political interference and nepotism in the staff hiring process. In February, an arrest warrant was issued in absentia for former chairman Hamid Kreidy, who had since fled to Switzerland following a probe into corruption in 2017.

t appears that like many Lebanese institutions, hiring was based on political patronage, with some reports claiming that many staff only showed up to receive their paycheques. The chairman admitted that this was a serious problem, describing the casino as a “microcosm of Lebanon”.

“Everyone was here through wasta [connections],” Khoury said, adding that there are roughly 400-450 redundant staff. He isn’t planning on letting them go though, and hopes that projects to generate more revenue would allow them to have more productive roles, such as the aforementioned bingo halls and online gaming.

With all that said, Khoury was able to turn that negative financial projection around, with Casino du Liban generating $194m in revenue in 2018 – a far cry from almost $282m in 2011, but a return to a positive trend for the first time in half a decade.

That positive trend has been brought to an abrupt halt, only encouraging calls for it to be sold off.

The finance ministry in April initiated the appraisal process to value state assets at the current market rate, but the casino’s chairman thinks it’s a terrible idea.

He called on economists and others who promote the selling of the casino to “have a conversation”, adding that they are unaware of how much the state benefits financially from the establishment.

“It benefits from the taxes and profits,” a defiant Khoury said.

Khoury is not alone in his opposition to selling off Casino du Liban and other state assets.

Mohamad Faour, a postdoctoral researcher in finance at University College Dublin, says selling them in the country’s current financial climate would be a “fire sale”.

“[They] would end up being sold for much lower prices,” Faour tells MEE. “Given corruption in Lebanon, [sold assets] would also likely go to cronies.”

He adds that regardless of whether or not the state should sell these assets, the underlying problem is mismanagement, which Faour says gets in the way of maximising revenue for the cash-strapped country.

“These assets have untapped potential,” Faour says. “Managing them properly can unlock sizeable income streams for Lebanon … if privatisation of some assets happens later for whatever reason, it will be on much better terms price-wise than privatising them now.”

Setting numbers aside, Khoury added that Casino du Liban is one of its kind in the entire region, and a unique component of the identity of Lebanon’s tourism industry.

“What still distinguishes us from regional and Arab states? We only have two things left in this country when it comes to tourism,” the chairman says.

“You have the tourism where you can go to the mountains and see beautiful areas that are unlike other Arab countries, and you have the casino … so we have to take care of the casino.”

“Our environment is being destroyed, and now the same might be done with the casino,” Khoury adds, pointing at the picturesque scene of rolling mountains seen from his office window. “Please let us have something in our country that allows us to stand out from our surroundings.”