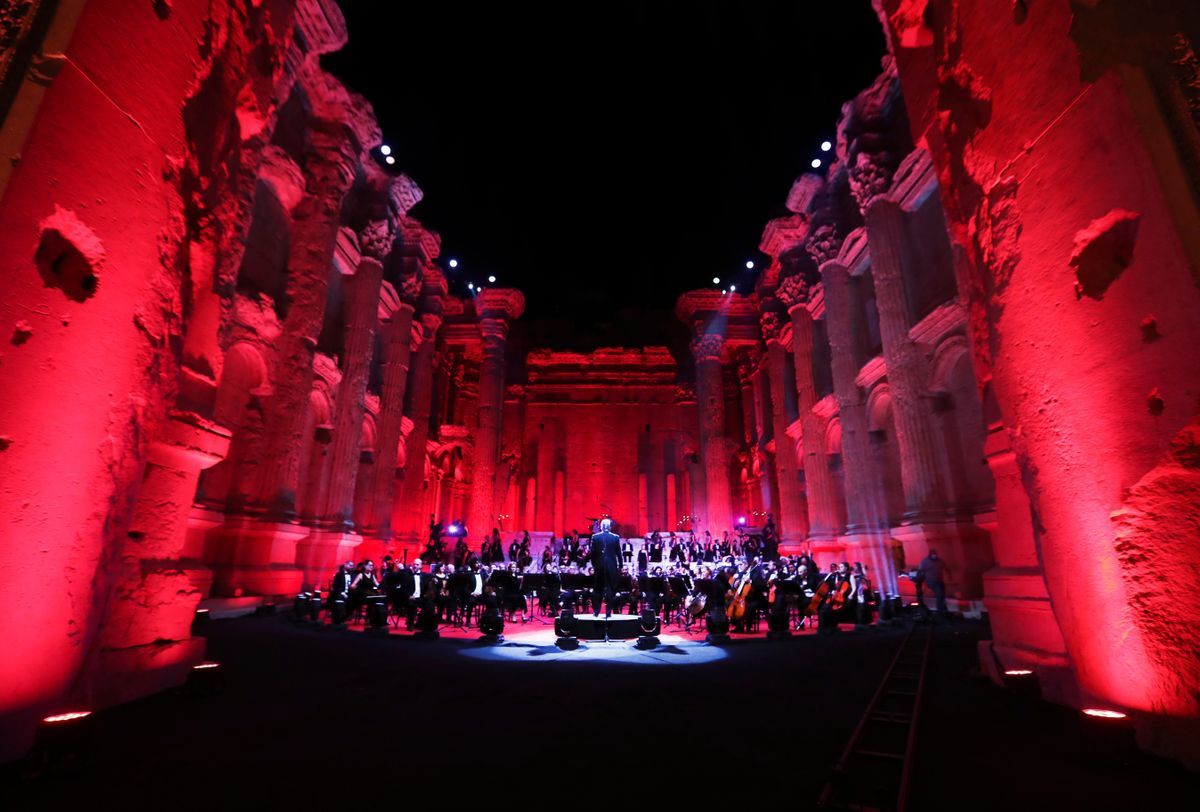 Musicians from the Lebanese Philharmonic Orchestra perform during a concert in the ancient northeastern city of Baalbek, Lebanon, Sunday, July 5, 2020. Dubbed “an act of cultural resilience,” the concert aims to send a message of unity and hope to the world amid the coronavirus pandemic and an unprecedented economic and financial crisis in Lebanon. For the first time since the Baalbek International Festival was launched in 1956, this year’s concert is being held without an audience, in line with strict COVID-19 guidelines. Instead, it is being broadcast live on local and regional TV stations and live-streamed on social media platform. (AP Photo/Bilal Hussein)
Share:

BAALBEK, Lebanon (AP) — For the first time ever, Lebanon on Sunday hosted its annual music festival in the ancient northeastern city of Baalbek without an audience, a move organizers dubbed “an act of cultural resilience” to the global coronavirus pandemic as well as the country’s unprecedented economic crisis.

Held amid soaring Roman columns, the Baalbek International Festival was founded in 1956. This year, it’s being broadcast on local and regional TV stations and live-streamed on social media in an effort to spread “unity and hope.”

“We could not have an audience, since it is impossible to bring 2,000-3,000 people to Baalbek amid the coronavirus precautions, so we decided to bring Baalbek into people’s homes,” Nayla de Freige, the festival’s president, told the local LBC TV station.

The festival’s website said this year’s program, entitled “Sound of Resilience,” was “one of the first big cultural events and a premiere in the Middle East after the confinement due to COVID-19.”

The dramatic setting — a massive Roman forum — was always part of the festival’s magic. Sunday’s concert was held at the Bacchus Temple, which stands in front of six columns that remain from the Temple of Jupiter. The ruins date back to the second and third centuries.

Lebanon is currently being shaken by a severe economic and financial crisis, made worse in recent months by the coronavirus and lockdown restrictions. The financial crisis is rooted in decades of systematic corruption and mismanagement by Lebanon’s ruling elite, who critics say refuse to reform despite a nationwide uprising that erupted last October and a rapidly deteriorating economy.

Although the lack of an audience is new, the festival suffered a 23-year hiatus during Lebanon’s civil war. It resumed in 1997, later hosting concerts by world-renowned artists including French singer Charles Aznavour in 1999, English musician Sting in 2001 and France’s Johnny Hallyday in 2003.

The festival was also stopped for one year in 2006 because of a month-long war between Israel and the Shiite militant group Hezbollah. Baalbek remains a Hezbollah stronghold, although the city continued to attract tourists.

“I would not call it a concert. I’d call it a message of solidarity and unity,” said Harout Fazlian, the festival’s artistic director and the conductor.

“People in their homes will be having front seats for one hour during which they can forget everything and listen to music,” he told LBC.

The concert was led by the Lebanese Philharmonic Orchestra with choirs from Lebanon’s Notre Dame University, Antonine University and the group Qolo Atiqo, as well as young Lebanese musicians.

By BILAL HUSSEIN and Bassem Mroue