Lebanon suicides spark outrage at govt over the economic crisis 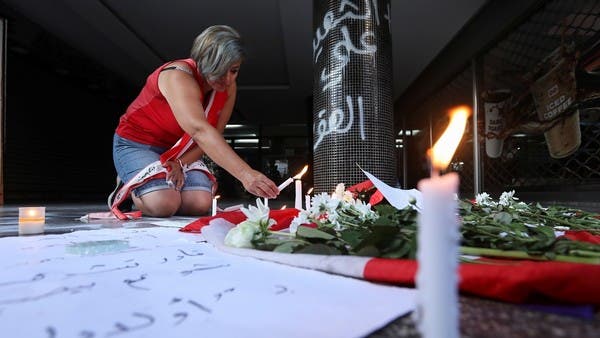 An unidentified relative of the 37-year-old man who was found hanging Friday in a room in his house is shown lighting a candle as she mourns him
Share:

Beirut (AFP) – Two suicides in Lebanon on Friday, apparently linked to the country’s deepening economic downturn, have sparked a new wave of criticism over the government’s mishandling of the crisis.

A 61-year-old man from the eastern region of Hermel shot himself on the sidewalk of a bustling Beirut shopping street in broad daylight, leaving a note and his clean criminal record at the scene.

The note referenced a popular revolutionary song that mentions hunger, suggesting his suicide was linked to the economic crisis that has been ravaging livelihoods across the country.

“He killed himself because of hunger,” the man’s cousin screamed as the security forces carried away the body.

The Lebanese pound, officially pegged at 1,507 pounds to the greenback, reached more than 9,000 to the dollar this week on the black market in a dizzying devaluation.

Prices have soared almost as fast as the exchange rate has plummeted, meaning that a salary of one million pounds is now worth a little more than $100, compared with almost $700 last year.

The suicide sparked small protests in the Hamra district, denouncing the government for its inaction over the country’s worst economic crisis since its 1975-1990 civil war.

“He did not commit suicide, he was killed in cold blood,” read one sign, blaming the government.

Saba Mroue, a protestor, said: “the political class is responsible”.

A second suicide, by a van driver near the southern city of Sidon, was also apparently linked to the economic crisis, a local official said.

The 37-year-old van driver hung himself in his home in the town of Jadra and his body was found on Friday morning, said municipality head Joseph al-Azzi.

The official said the suicide was linked to the economic crisis, saying the man was struggling financially.

A spokesperson for Lebanon’s Internal Security Forces confirmed the two suicides, saying that suicide rates are up this year, although he could not provide figures.

Jad Chaaban, an economist and anti-government activist, described the suicides as a “murder by a ruling class that is prepared to kill us, starve us and impoverish us so that they can guard their interests.”