Distancing from Trump? Some Republicans step up critiques 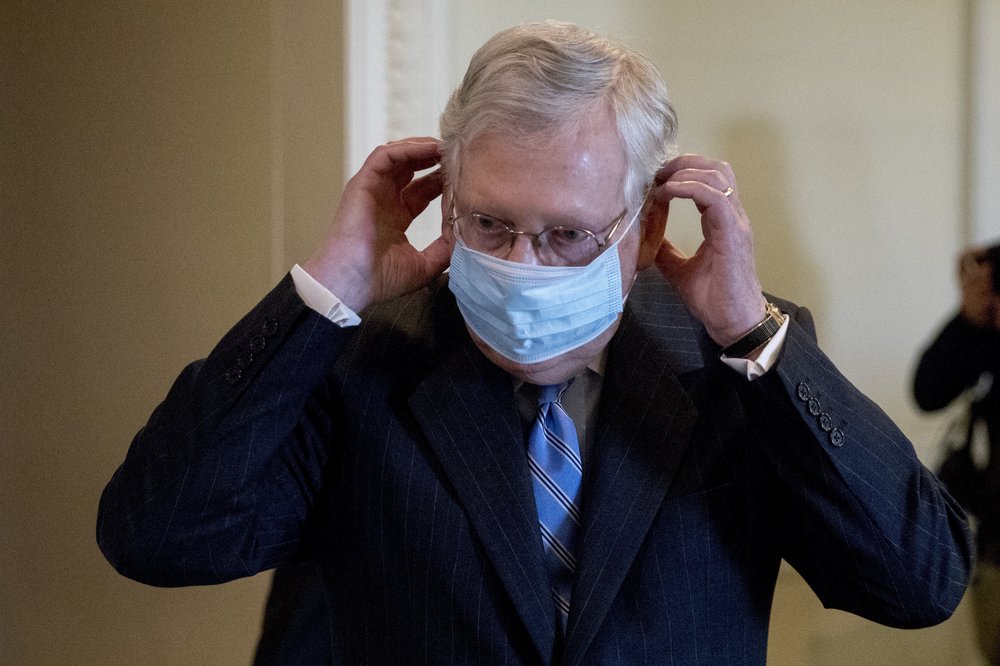 FILE – In this June 17, 2020, file photo, Senate Majority Leader Mitch McConnell of Ky., leaves a news conference on Capitol Hill in Washington. For more than three years, President Donald Trump instilled such fear in the Republican Party’s leaders that most kept criticism of his turbulent leadership or inconsistent politics to themselves. That’s beginning to change. While Trump avoids wearing a mask in public, McConnell said facial coverings are “really important” until a vaccine is found. (AP Photo/Andrew Harnik, File)
Share:

For more than three years, President Donald Trump instilled such fear in the Republican Party’s leaders that most kept criticism of his turbulent leadership or inconsistent politics to themselves.

Four months before voters decide the Republican president’s reelection, some in Trump’s party are daring to say the quiet part out loud as Trump struggles to navigate competing national crises and a scattershot campaign message.

“He is losing,” former New Jersey Gov. Chris Christie, a Trump friend and confidant, said Sunday of Trump’s reelection prospects on ABC’s “This Week.” “And if he doesn’t change course, both in terms of the substance of what he’s discussing and the way that he approaches the American people, then he will lose.”

Beyond politics, Trump’s allies — even some in his own administration — are distancing themselves from his policies.

While Trump avoids wearing a mask in public, Senate Majority Leader Mitch McConnell said, “We must have no stigma — none — about wearing masks when we leave our homes.” Vice President Mike Pence was pictured this weekend wearing a mask and urged other Americans to do the same. And Wyoming Rep. Liz Cheney, the No. 3 Republican in the House, tweeted a picture of her father, former Vice President Dick Cheney, wearing a mask with the hashtag #realmenwearmasks.

At the same time, Trump has been criticized by some Republicans for inconsistent leadership during the sweeping national protests against police brutality. On Sunday, the president tweeted and subsequently deleted a video in which a supporter used the white supremacist mantra “White power.”

Make no mistake, Trump still has a tight grip on the party. And the intensifying concerns are remarkably similar to those that emerged in 2016, when Trump overcame glaring personal and political liabilities to defeat Democrat Hillary Clinton. The splits signal that Republicans are aware of the president’s weak political standing and may feel increasingly free to break from him as voting nears.

While Election Day isn’t until Nov. 3, early voting in a handful of key states, including the battlegrounds of Pennsylvania, Michigan and Virginia, begins in mid-September.

Trump has come to accept that he is currently trailing Democratic rival Joe Biden following a series of phone calls and polling presentations with advisers, according to four campaign officials and Republicans close to the campaign who spoke on condition of anonymity because they weren’t authorized to publicly discuss private conversations. He has responded with a mix of disbelief and anger, including frequent frustration that the pandemic robbed him of a strong economy and drowned out the attacks he hoped to land against Biden, according to the officials.

The president’s popularity with the party base remains strong. But in an implicit acknowledgement of GOP anxiety, Trump’s deputy campaign manager Bill Stepien released a memo Sunday evening questioning polling data that gives Biden an advantage, while pointing to voter participation numbers in recent primaries suggesting Trump’s supporters are excited.

“Clearly, Democrats have not rallied around their flawed candidate,” Stepien wrote. “Today there can be no debate that President Trump has a decided advantage in base enthusiasm and can be most confident that his supporters will turn out.”

“You know a candidate is in trouble when their only argument for reelection is the enthusiasm of their dwindling pool of supporters, which is now barely over 40%,” he said.

One factor driving recent concerns has been Trump’s inability to articulate an agenda or a clear message for his second term. After a first term defined almost exclusively by his desire to undo former President Barack Obama’s accomplishments, Trump has failed to offer a single future policy priority of his own during multiple recent interviews.

Jerry Falwell Jr., a Trump confidant and the president of Liberty University, conceded that the president has not been clear enough about his plans.

“I do think he needs to talk more about what he’s going to do in the next four years versus taking credit for what he’s already done,” Falwell said in an interview, even as he predicted Trump’s political standing would improve once voters see Biden on the debate stage this fall.

“Whatever hesitance they might have about Donald Trump is going to turn into fear about Joe Biden’s ability to confidently do the job,” he said.

For now, however, aides privately worry about Trump’s increasingly scattershot approach to the campaign. Many hoped that his comeback rally in Tulsa, Oklahoma, earlier in the month would spark new momentum, when it instead raised questions about his supporters’ enthusiasm and his management of the pandemic.

The officials close to the campaign report that Trump was ecstatic about the raucous crowd he drew to Phoenix a few days later, but the positive development was quickly overshadowed by the resurgence of the virus. COVID-19 infections have exploded across several states, including Arizona, forcing some governors to scale back reopening plans.

Trump’s campaign has also continued to struggle with its attempts to define and attack Biden, as broadsides over China and his son’s work overseas have failed to land. Trump himself has begun wondering if his pet nickname for Biden, “Sleepy Joe,” remains effective. Over the weekend, he tested out a new one: “Corrupt Joe.”

Meanwhile, Trump aides at all levels have begun to accept the potential that their time in the White House may be short-lived.

Where six months ago, they plotted their promotion path within government, some are beginning to draw up plans to return to the private sector. To be sure, Trump’s White House has set records for turnover, but efforts to prepare for life after the administration have been taken up in earnest in some corners of the White House complex.

“We’re being really cautious,” Anzalone said, “although we know there’s something going on.”