Syria refuses to bou to US sanctions, says Muallem 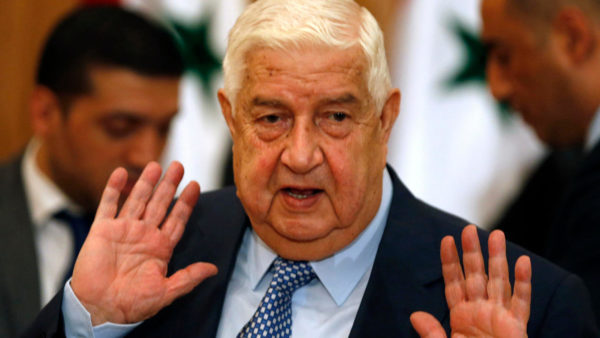 Syria refuses to “bow” to Washington’s demands under the latest US sanctions, Foreign Minister Walid Muallem said Tuesday, charging that the sole aim was to undermine support for President Bashar al-Assad.

“If they (Washington) dreamt that Syria and its people would bow to their conditions, then I would say let them keep dreaming because this will never happen,” Muallem told a news conference in Damascus, nearly a week after the Caesar Act came into force.

The sanctions laid down in the law, according to US officials, aim to force Assad to accept UN Security Council Resolution 2254 of 2015 that calls for a ceasefire, elections and political transition in Syria.

But the real objective is “to influence upcoming presidential elections” in Syria scheduled for next year, Muallem said, and weaken support for Assad ahead of polling.

“President Assad will remain as long as the Syrian people want him to,” the foreign minister stressed.

The Caesar Act, which took effect last Wednesday, punishes under US law any company that works with Assad, casting a cloud over efforts to rebuild Syria.

It seeks to prevent any normalisation with Assad’s regime without accountability for human rights abuses, and also blocks US reconstruction assistance.

The first designations target 39 people or entities, including Assad and his wife Asma — the first time she has been slapped with US sanctions.

Secretary of State Mike Pompeo called the sanctions “the beginning of what will be a sustained campaign of economic and political pressure to deny the Assad regime revenue and support it uses to wage war and commit mass atrocities against the Syrian people”.

Muallem said such comments were part of a “chorus of lies”, arguing that “those seeking the interests of the Syrian people wouldn’t conspire against their livelihoods”.

Syrians should try to use the latest sanctions as an “opportunity to advance the national economy, achieve self-sufficiency, and deepen our cooperation with friends and allies”, he said.

Assad, backed by Russia and Iran, has won back control of most of Syria after a nine-year war that has killed more than 380,000 people and displaced over half of the country’s pre-war population.

Muallem said the latest sanctions would fail to pressure Syria into “abandoning our alliances and our support for the resistance and to embark on the path of normalisation with Israel”.

Syria is in the grips of a severe economic crisis compounded by sanctions.

On the same day that the Caesar Act came into force, Syria’s central bank devalued the pound after the currency had depreciated for weeks on the black market in anticipation of the US measures.