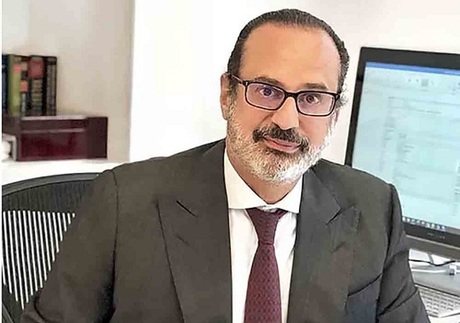 Henri Chaoul, quit his role over the failure of politicians and financial authorities to confront the true scale of the losses to Lebanon’s financial sector. “I have come to the realization that there is no genuine will to implement either reforms or a restructuring of the banking sector, including the Central Bank,” Chaoul said.
Share:

“Dr. Henri Chaoul resigned from his post as adviser to the Minister of Finance working with the Lebanese delegation negotiating with the International Monetary Fund,” a statement said.

“All the efforts exerted by Dr. Chaoul in the framework of his previous position are deeply appreciated by the Minister,” the statement added.

This development comes a day after The International Monetary Fund announced that the Lebanese government needed to implement comprehensive, equitable reforms in many areas before any agreement is reached on financial aid .

IMF Spokesman Gerry Rice added that Lebanon also needed to reach a common understanding about the source and size of the financial losses it faces.

“The discussions are ongoing. These are complex issues that require a common diagnostic of the sources of the losses and the size of the losses in the financial system, as well as on the feasible options to address them in an effective, and equitable manner,” Rice said during a regular briefing held online on Thursday.

Lebanon is grappling with an acute financial crisis seen as the biggest threat to its stability since the 1975-90 civil war. Its currency has fallen amid a hard-currency liquidity crunch, which led the state to default on its sovereign debt in March.

The heavily indebted country has been sliding deeper into trouble since October, when a combination of slowing capital inflows and protests against corruption spilled into a political, banking and financial crisis.

Hopes of a quick rescue deal with the IMF have been complicated by a row between the government and central bank over the scale of the losses in the financial system.

Rice’s comments made clear that the IMF expects Lebanon to sort out those differences, and to move forward with a broad series of reforms.

“These are complex issues, which require consensus on how to address the difficult challenge in an effective and equitable manner,” he said. “Comprehensive reforms in many areas are needed and these require ownership and consensus, from society at large.”

Commenting on Chaoul’s resignation MP Michel Daher tweeted : “The resignation of Dr. Henry Chaoul as adviser to the Minister of Finance struck me at the heart , since he is one of the best and most qualified financial experts I have known, and this proves that the country is in a mess . Trying to escape from the problem and not address it in a transparent manner will destroy us for years and decades to come. ”

Lebanese media quoted analysts as saying that Dr Chaoul quit because he became totally convinced over the unwillingness of the political class to undertake the necessary reforms and over the lack of serious intention to restructure the financial sector.