US threatens UAE with Caesar Act sanctions over normalisation with Syria 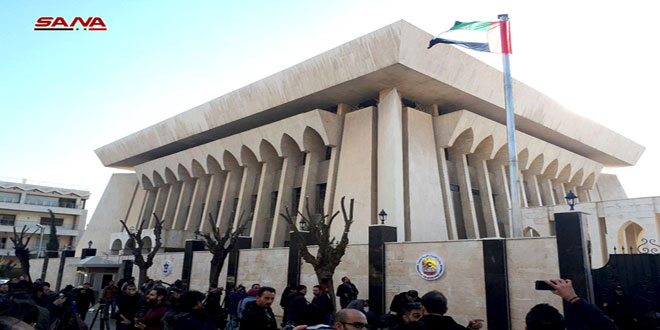 UAE reopened its embassy in Damascus, as the Acting Charge d’affaires started his work at the Embassy HQ DEC 27 , 2018. US Special Representative for Syria Engagement James Jeffrey has signalled that the UAE could soon be hit with sanctions if it pushes ahead with normalisation efforts with the Syrian regime,
Share:

US Special Representative for Syria Engagement James Jeffrey has signalled that the United Arab Emirates (UAE) could soon be hit with sanctions if it pushes ahead with normalisation efforts with the Syrian regime, under the recently passed Caesar Act.

The law, which came into action on Wednesday, imposes sanctions on 39 companies and individuals affiliated with the Syrian regime, in a bid to starve it of funds and pressure President Bashar al-Assad into entering UN-backed peace talks.

Jeffrey told a press conference on the Caesar Act on Wednesday that the UAE “knows” that the US is “absolutely opposed” to countries reopening their embassies in Damascus, a step that Abu Dhabi took in December 2018.

“They’re sovereign countries; they can make these decisions. But we have made it clear that we think this is a bad idea,” Jeffrey said. “It is not going to be conducive to a carrying out of the UN Security Council resolution and the ending of a conflict that is very troubling for the entire region.”

Jeffrey went on to say that any Emirati individual or company which violates the Caesar Act will be sanctioned.

“In terms of economic activities that either somebody in the UAE or somebody in another country does that meets the criteria of these sanctions or legislation, they are a potential sanctions target,” Jeffrey said.

The envoy declined to specify further on who may be sanctioned in the future, adding: “You can read the criteria just like I can, and so can those people, so they’ll have to make their own decisions.

On top of reopening its Damascus embassy, the UAE has also sent trade delegations to Syria and is believed to be operating in the country. Upon the reopening of the embassy, it confirmed it was ready to normalise relations with Damascus despite the ongoing bloodshed inside Syria.

However the Caesar Act targets individuals and businesses anywhere in the world who operate either directly or indirectly in Syria’s economy.

The law sanctions specific sectors in Syria, including oil and natural gas, military aircraft, construction and engineering. It will also give US President Donald Trump wide powers to freeze assets of any individual dealing with Syria, regardless of their nationality.

Foreign investors, particularly firms in the region, will no longer be able to pursue business opportunities in the reconstruction and tourism sectors in Syria.

As well as the UAE, Lebanese firms, many of which work with Syria’s energy sector, are also expected to be impacted by the move.

However it remains unclear how the sanctions will be enforced or monitored.

Although Syria has already been targeted by US and EU sanctions, which have seen state and business assets frozen, the new law targets for the first time Russian, Iranian and other foreign entities connected to the Syrian regime.