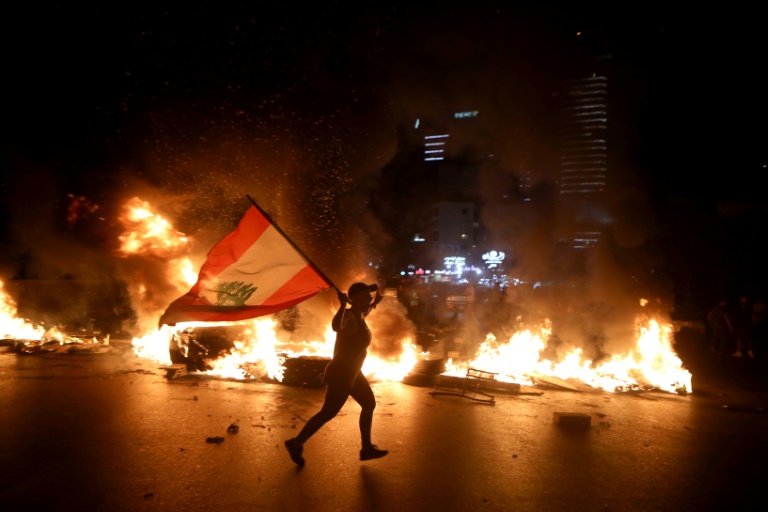 Hundreds of people have taken to the streets in cities across Lebanon amid escalating protests as the country faces a collapse in its currency.

Anger has surged as the Lebanese pound tumbled to record lows, having lost 70% of its value since October when protests began.

The prime minister has called an emergency cabinet meeting to discuss the economic crisis.

The protests paused during coronavirus lockdown, but recently resumed.

The depreciation of the Lebanese pound has plunged the country into its worst economic crisis in decades.

Many Lebanese citizens who rely on hard currency savings have fallen into poverty, their plight worsened by the pandemic.

On Thursday night, demonstrators who had gathered in the city centre vented their anger, setting fires and blocking roads. Whereas for the first few months protests called for political change, now they are driven by despair over hunger.

Unemployment is high and most Lebanese who do work are paid in local currency which has lost its value, making food and other basic goods unaffordable for many families.

One protester said: “Lebanon has always been chaotic, and it seems our efforts won’t [bring about] any change, so let it be even more chaotic.”

But many say the mood reminds them of the period before Lebanon imploded into civil war in 1975 and the worry is about what happens next as tensions continue to spiral.

In the northern city of Tripoli, soldiers deployed to try to restore calm were pelted with rocks thrown by protesters. Petrol bombs were also hurled at banks, which have been blamed for Lebanon’s financial troubles.

In central Beirut, some of the protests which began on Thursday night turned into clashes, as protesters blocked roads outside parliament and set fire to banks.

Demonstrators hurled Molotov cocktails and rocks at the security forces, who responded with tear gas.

Many roads outside Beirut are still blocked.

“We came down to the streets because all that we demanded on 17 October [2019, when protests erupted in Lebanon] did not get achieved,” a demonstrator in Beirut, Manal, told Reuters. “They got us a prime minister who is worse than the one before.

“Today, the dollar has reached 7,000 Lebanese pounds. We can’t afford to eat or pay rent or anything like that. We will stay here until the dollar rate goes down and until all our demands are met.”

Even before coronavirus hit, Lebanon was experiencing the worst economic crisis in the country’s history, which triggered large anti-government protests late last year.

While the authorities have been praised for their response to the virus, almost half the country’s six million people are now living below the poverty line.

The depreciation of the currency has led to rampant inflation in a country that relies on imports.

The Lebanese government is in talks with the International Monetary Fund, but any bailout is expected to involve painful economic reforms, in a country built on a sectarian political system that is likely to face stiff resistance from the entrenched parties.

Hundreds, if not thousands of businesses, have gone bust, and more than a third of the population is unemployed.

In March, Lebanon defaulted on a foreign debt payment for the first time in its history.