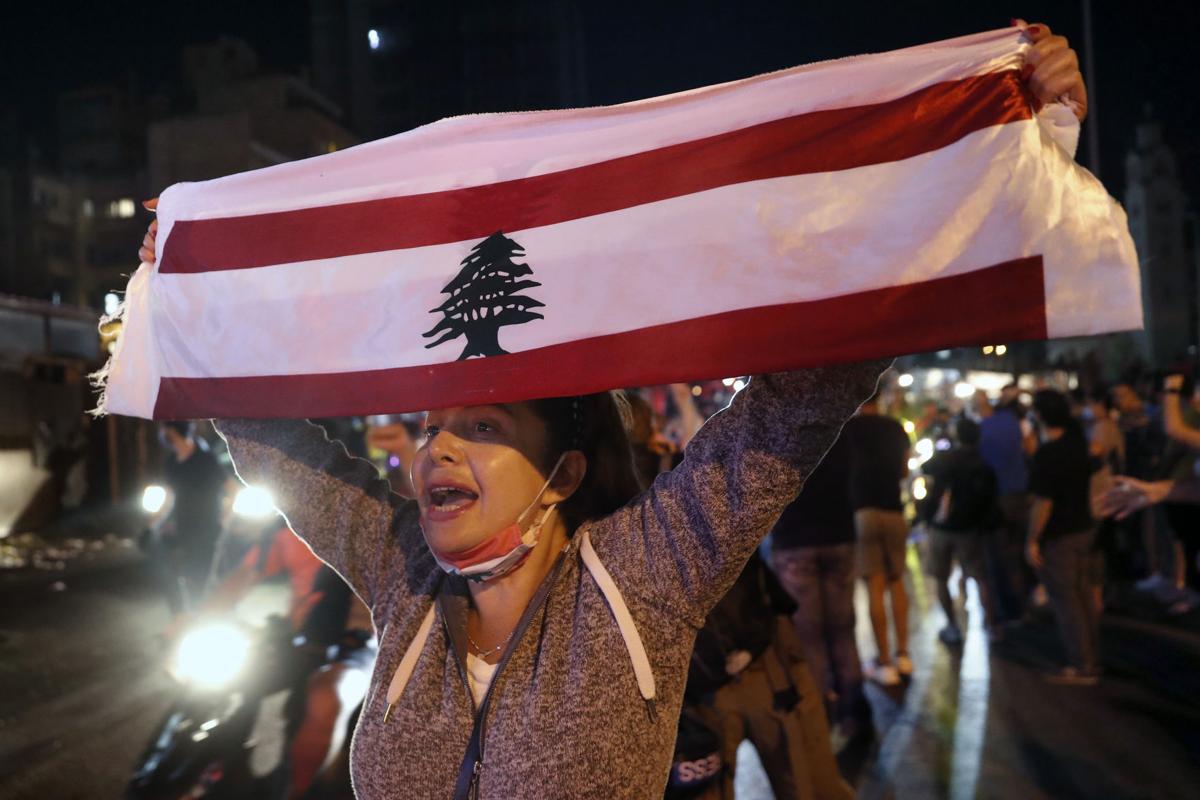 Anti-government protesters shout slogans during a protest against the political leadership they blame for the economic and financial crisis, in front the government house, in downtown Beirut, Lebanon, Thursday, June 11, 2020. Hundreds of Lebanese poured into the streets to protest the tumbling of the national currency to a new low against the dollar on Thursday, blocking roads and highways in several places across the small country that had started slowly opening up after coronavirus restrictions. (AP Photo/Hussein Malla)
Share:

BEIRUT (AP) — For months, Kamal Nasser, a successful plumbing contractor in Lebanon, has seen his business base erode.

There are almost no new construction projects as people save for gloomier days, and with the local currency on a downward spiral, he has not been able to import his most basic materials — tubes or plumbing valves from Europe and Ukraine.

Despite efforts to control the currency depreciation, the Lebanese pound sold for 7,000 to the dollar on Thursday on the black market, down from 4,000 in recent days. The dramatic tumble sparked raging protests overnight that targeted private banks and prompted an emergency government meeting Friday.

Lebanon’s government and its central bank promised on Friday to inject fresh dollars into the market to control the fast deteriorating exchange rate that saw the local currency lose nearly 70% of its value in weeks. The pound had maintained a fixed rate of around 1,500 to the dollar for nearly 30 years. No specific amount was given for the planned injection.

But the promise was met with skepticism from a public that has lost trust in officials they blame for the country’s unparalleled financial and economic crisis.

“This is madness,” Nasser said. “People can’t take this economic situation anymore. It only keeps getting worse.”

Nasser said the government plan is meant to diffuse public anger but won’t resolve the problem.

“All those promises from the government or the presidents are meaningless,” he said. “It is all for them to hide their own theft … and to calm people down.”

The Lebanese have for years used the dollar and the Lebanese pound interchangeably. So with the drop, employees saw their income and savings lose over 70% in value in weeks. Parents have been unable to pay school or insurance fees charged in dollars, and many landlords are refusing to accept rent payment in pounds. Meanwhile, banks have stopped dispensing dollars altogether, except from new transfers from abroad.

Lebanon’s President Michel Aoun blamed the currency plunge this week on “political manipulation,” intentionally aimed to create chaos to undermine the government he is allied with.

“This government will reassure the public and the dollar exchange rate will be reduced gradually,” Aoun said, according to a statement following the all-day emergency Cabinet meeting. The meeting included Prime Minister Hassan Diab and Riad Salameh, the central bank governor who has been singled out by Diab for alleged mishandling of the situation.

Aoun vowed the new measures would take effect on Monday but it was unclear if there are enough dollars available to meet local demand.

The central bank said last month it has around $20 billion in reserves. The head of the money changers union, Mahmoud Halawa, said security forces would crack down on the black market or any money changers selling above a set rate of 3,940 to the dollar.

Lebanon’s unrivaled economic and financial crisis has exposed deep mistrust of the government’s crisis management and has also reflected panic over new U.S. sanctions that will affect neighboring Syria in the coming days. Many suspect the major fluctuations resulted from dollars being smuggled into Syria.

Lebanon’s financial problems predate the coronavirus pandemic, which put the country in lockdown for months, further compounding the crisis. Years of corruption and mismanagement have left Lebanon with depleted resources, while shrinking investment in the war-riddled region. Falling remittances from Lebanese abroad only increased the shortage of foreign capital.

In an outpouring of anger, protesters took to the streets Thursday, shutting down roads in several parts of the country and burning tires. Some protesters pelted branch offices of private banks with stones while in central Beirut, one bank was set on fire.

After a raucous night that included volleys of tear gas, calm was restored Friday and security forces reopened blocked roads.

The renewed demonstrations represented a huge challenge for Diab, the prime minister, who took over after his predecessor, Saad Hariri, resigned amid nationwide protests late last year. Diab’s government is supported by the Iranian backed Shiite militant group Hezbollah and its allies but has already been weakened by the crisis.

The heavily indebted government has been in talks for weeks with the International Monetary Fund after it asked for a financial rescue plan but there are no signs of an imminent deal.

Mike Azar, a financial adviser and former lecturer at John Hopkins University, said the only way to control the exchange rate is to increase demand for the local currency while supplying sustainable dollars for example, by increasing exports.

“If they inject dollars into the exchange offices … they would be flushing our remaining reserves down the drain. People will just go buy dollars and store them in their houses,” Azar said.

Injecting dollars has been promised time and again, he said, but only offers temporary relief and adds to depositors’ woes.

“Each dollar of reserves we spend increases the size of the losses because these reserves are owed to depositors so depositors are subsidizing this transaction,” Azar added.

Nasser, the contractor, said he has few options.

“I am seriously thinking of leaving the country on the first plane out because we no longer have room here,” he said. “This country is for people who are not good. They don’t want good people to stay.”