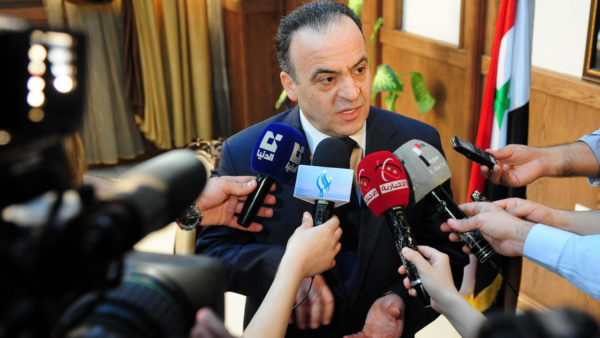 Syrian President Bashar al-Assad on Thursday sacked his prime minister of four years, as the country grapples with a stinging economic crisis and renewed protests.

“President Assad issues decree number 143 for year 2020 which relieves the prime minister Imad Muhammad Dib Khamis of his position,” the presidency said in a statement.

He is replaced by Water Resources Minister Hussein Arnous for an interim period leading to legislative polls set for next month.

“Assad assigns… Hussein Arnous the duties of prime minister as well as his (other) duties,” the presidency said.

“The government is continuing with its work until a new parliament is elected.”

Parliamentary polls had been due in Syria earlier this year but were postponed twice due to the coronavirus pandemic. The new date set last month is July 19.

Khamis’ sacking follows sharp criticism of his government over its handling of the economic crisis.

Syria’s economy has been battered by nine years of war compounded by a financial crisis in neighbouring Lebanon, which had served as a conduit to bring dollars into government-held areas despite international sanctions.

In recent days the value of the Syrian pound on the black market has tumbled from one record low to the next.

The government has blamed the unofficial devaluation on US sanctions and exchange rate “manipulation”.

But the rapid deterioration has sparked rare criticism in government-held areas, including in the southern city of Sweida.

“Revolution, freedom, social justice,” dozens of protesters shouted, in slogans reminiscent of the 2011 uprising whose repression sparked a civil war that has killed more than 380,000 people.

Prices of some basic goods are set to increase further after US legislation known as the Caesar Act comes into effect later this month, targeting companies dealing with Damascus.

At a protest Thursday in Damascus, dozens chanted in support of Assad and against the US law.

One held up a sign reading in English: “No to America and its sanctions.”

The World Food Programme says the skyrocketing cost of living in a country where most people are already below the poverty line means hunger could soon spread.

“The WFP’s reference food basket has already increased by 11 percent between April and May 2020 and 133 percent since May 2019,” the UN agency’s spokeswoman Jessica Lawson told AFP.

She called that “a staggering increase for families who were already struggling to purchase the food they need.”

Syrians have also felt the pinch as the cash-strapped government has repeatedly cut rations of subsidised fuel.