Military brass clashing publicly with a president is rare in America 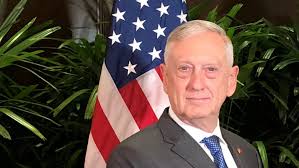 Former Secretary of Defense James Mattis castigated President Donald Trump as “the first president in my lifetime who does not try to unite the American people” in a forceful rebuke of his former boss as nationwide protests have intensified over the death of George Floyd.
Share:

President Donald Trump faced condemnation from respected former leaders of America’s armed forces this week over his approach to civil unrest in a rare series of clashes between a president, who serves as U.S. commander-in-chief, and such prominent military figures.

While policy differences are a normal outgrowth of civilian control of the military, criticism of the sort leveled this week has had few precedents in American history. Here is a look at some past disputes:

– In 1862, President Abraham Lincoln fired Major General George McClellan as his top commander during the American Civil War, a dire period in U.S. history. McClellan had privately derided Lincoln and even refused to meet with him. Lincoln ousted McClellan after the general repeatedly exhibited timidity as a commander and ignored the president’s entreaties to pursue and engage rebel forces. McClellan sought to oust Lincoln from office by running as the Democratic Party candidate against the Republican president in the 1864 election. Lincoln won convincingly.

– In 1951, President Harry Truman fired General Douglas MacArthur as commander of U.S. forces in the Korean War. The ouster followed tensions between a president who wanted to ensure that the war remained limited and a general who wanted to bomb China and consider nuclear weapons. MacArthur went public with their differences, which the president regarded as insubordination. In an address announcing the firing, Truman said that he acted to “prevent a third world war” and that MacArthur was “unable to give his wholehearted support to the policies of the United States government.”

Retired Admiral Mike Mullen, who served as the top U.S. military officer from 2007 to 2011 as chairman of the Joint Chiefs of Staff, said this week Trump had “laid bare his disdain for the rights of peaceful protest” and “gave succor to the leaders of other countries who take comfort in our domestic strife.” Retired General Martin Dempsey, the Joint Chiefs chairman from 2011 to 2015, added, “America is not a battleground. Our fellow citizens are not the enemy.”

Trump’s current civilian leader of the Pentagon, Defense Secretary Mark Esper, also suggested differences with Trump when he announced his opposition on Wednesday to invoking an 1807 law to deploy active-duty troops to quell civil unrest for now.

Defense analyst Loren Thompson of the Lexington Institute consultancy said, “Public displays of disagreement with the White House by defense secretaries or Joint Chiefs chairman are almost unheard of. There are always frictions but to go public in such a visible way is almost without precedent.”

– In 2010, President Barack Obama fired General Stanley McChrystal as the top U.S. commander in the Afghanistan War after McChrystal and his aides had criticized him and belittled Vice President Joe Biden and the White House staff in comments published by Rolling Stone magazine.

– The criticism of Trump differs from previous examples in that it involves past officers. But the comments by retired General James Mattis, a senior U.S. commander in Iraq and Afghanistan and defense secretary in the first two years of Trump’s presidency, represented the most significant reprimand of Trump yet by a former member of his administration. Mattis issued his statement on Wednesday after Trump sought to militarize the response to protests against police brutality that in some cities turned violent. Mattis accused Trump of seeking to divide Americans and of allowing troops to be ordered to “violate the constitutional rights of their fellow citizens.”