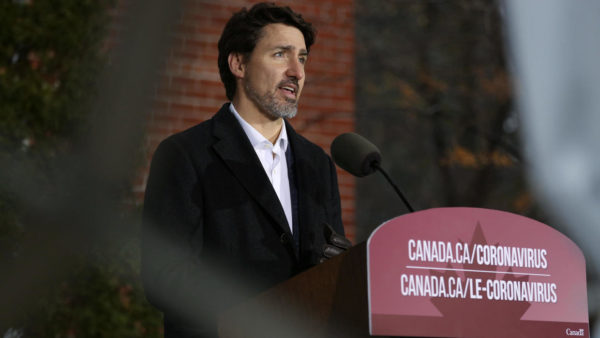 “Russia was excluded from the G7 after it invaded Crimea a number of years ago,” Trudeau told reporters.

“Its continued disrespect and flaunting of international rules and norms is why it remains outside of the G7 and will continue to remain out,” he added.

On Saturday Trump said he would postpone the planned June summit of leaders from the United States, Germany, Britain, Canada, France, Italy and Japan after German Chancellor Angela Merkel said she would not be coming, citing the coronavirus pandemic.

Trump said he could try again in September, and invite other countries including Russia to join the meeting.

“I don’t feel that as a G7 it properly represents what’s going on in the world. It’s a very outdated group of countries,” Trump said.

He said he would like to invite Russia, South Korea, Australia and India to join an expanded summit in the fall.

The Kremlin said Monday that Trump had called President Vladimir Putin and discussed his plan to hold a rescheduled G7 “with possible invitation of the leaders of Russia, Australia, India and South Korea.”

Trudeau though flatly rejected that prospect.

“It’s really important to keep holding these meetings and making sure that we are coordinating internationally in this time of crisis,” he said.

Russia was expelled from what was previously the G8 in 2014 after invading and seizing Crimea from Ukraine and declaring it part of Russian territory.

This isn’t the first time Trump has mused about bringing Russia back to the G7 — he made similar comments two years ago on the eve of a leaders’ summit that Trudeau hosted in Charlevoix, Que.

That summit ended in disarray with Trump hurling insults at Trudeau over Twitter after he departed Charlevoix. Canada and the U.S. were mired in contentious renegotiation of the North American Free Trade Agreement at the time, and Trudeau reiterated his opposition to U.S. steel and aluminum tariffs at the summit’s closing press conference. Trump was bound for a historic summit in North Korea when he heard them.

Late last month, Trump and White House officials were considering the idea of holding an in-person G7 summit near Washington.

Trudeau said then that in-person G7 meetings leaders are more effective than the virtual alternative, but he said he wanted to make sure the U.S. had plans to deal with the health risks posed by COVID-19.

“We’ve always been working with the United States to co-ordinate when we can hold this important G7 meeting. It’s really important to keep holding these meetings and co-ordinating internationally in this time of crisis,” Trudeau said Monday.