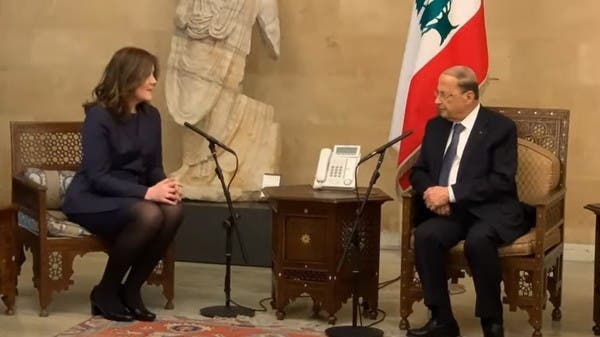 File photo of US Ambassador Dorothy Shea when she presented her credentials to President Aoun. (Screengrab)
Share:

BEIRUT – The Lebanese government must turn its reform ideas into reality and take concrete steps to win international support, the U.S. ambassador said in an interview broadcast on Sunday.

Dorothy Shea also told OTV it was a mistake to scapegoat any one person or institution for Lebanon’s economic collapse in response to a question about the role of central bank Governor Riad Salameh, who she said “enjoys great confidence in the international financial community”.

Lebanon is suffering an acute financial crisis seen as the biggest threat to its stability since the 1975-1990 civil war.

Shea said the United States was still assessing the government, formed with backing from the heavily armed, Iran-backed Shi’ite group Hezbollah, listed as a terrorist organisation by Washington.

“The government has demonstrated a good intention to fight corruption and make itself committed to reforms. Now it needs to take that commitment to the next level and begin to make these ideas reality,” Shea said.

“Are they willing to push these reforms forward? We haven’t yet made a final judgement on that.”

The government launched IMF negotiations in May.

Asked what Lebanon must do to secure support, Shea said the international community was looking for concrete reforms. “It is easy to say and much harder to do.”

The crisis is rooted in decades of waste and corruption and exploded last year as capital inflows slowed and protests erupted against the ruling elite.

On the role of Salameh, Shea said the United States had worked very closely with him over the years. Central bank appointments were a sovereign matter, she added.

“If the international financial community does not have confidence, however, in the leadership of your government’s top financial institutions, then I think you are not going to see the inflows of investment … that the economy so desperately needs,” she said.