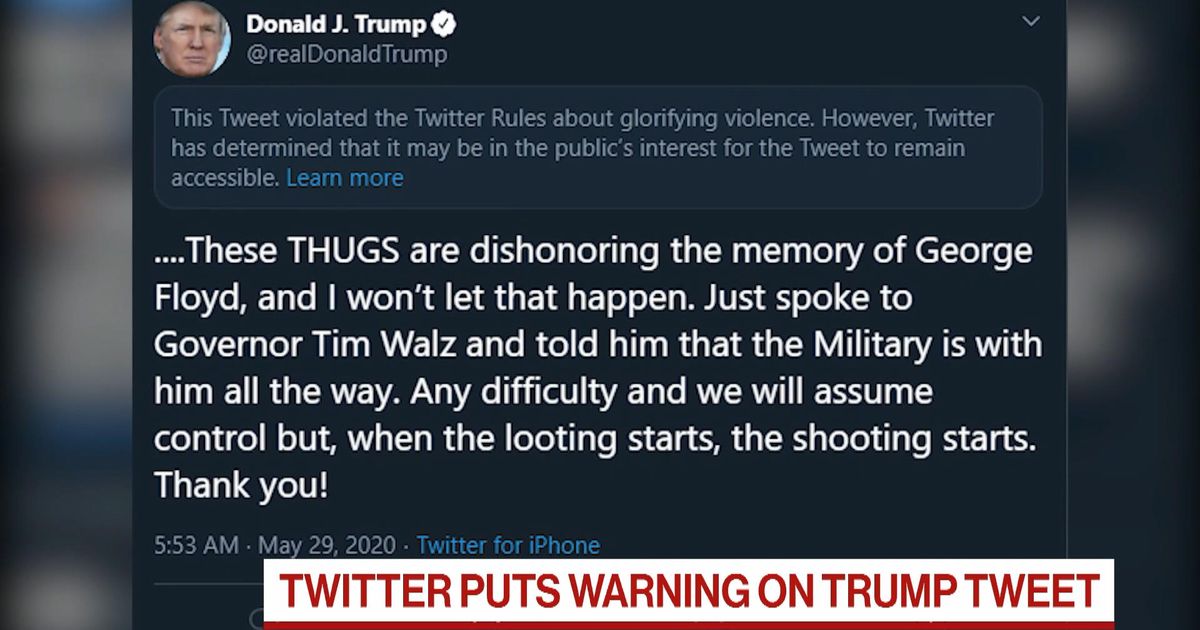 Twitter has flagged a tweet from the official White House Twitter account which reposted the text of a tweet President Donald Trump sent early Friday morning, saying “when the looting starts, the shooting starts,” saying the tweets violated its rules about “glorifying violence.”

The tweets were in reference to the ongoing unrest in Minneapolis following the death of George Floyd.

“These THUGS are dishonoring the memory of George Floyd, and I won’t let that happen. Just spoke to Governor Tim Walz and told him that the Military is with him all the way. Any difficulty and we will assume control but, when the looting starts, the shooting starts. Thank you!” Trump tweeted shortly before 1 a.m. Friday.

The tweets are now only visible if “view” is clicked.

“Twitter is doing nothing about all of the lies & propaganda being put out by China or the Radical Left Democrat Party,” Trump tweeted. “They have targeted Republicans, Conservatives & the President of the United States. Section 230 should be revoked by Congress. Until then, it will be regulated.”

After protesters overtook the Minneapolis Police Department’s Third Precinct and set it on fire, Trump lashed out at local officials and said the military could take over the response to the protests.

“I can’t stand back & watch this happen to a great American City, Minneapolis. A total lack of leadership,” Trump tweeted. “Either the very weak Radical Left Mayor, Jacob Frey, get his act together and bring the City under control, or I will send in the National Guard & get the job done right.”

Frey responded to Trump at an early-morning press conference Friday, saying that type of finger point is weak.

“Weakness is refusing to take responsibility for your actions. Weakness is pointing your finger at somebody else during a time of crisis,” Frey said. “Donald Trump knows nothing about the strength of Minneapolis. We are strong as hell. Is this a difficult time period? Yes. But you better be damn sure that we’re gonna get through this.”

Floyd, who is black, was seen pinned down in a video by a white police officer and later died. He could be heard screaming, “I can’t breathe,” on the video of the incident.

The video of Floyd’s death has now caused outrage in the city of Minneapolis and all over the country. Residents of the city have protested his death since Tuesday.

This is the second time this week Twitter has taken action against Trump’s tweets.

He said the order allows for new regulations so that social media companies “that engage in censoring or any political conduct will not be able to keep their liability shield.”