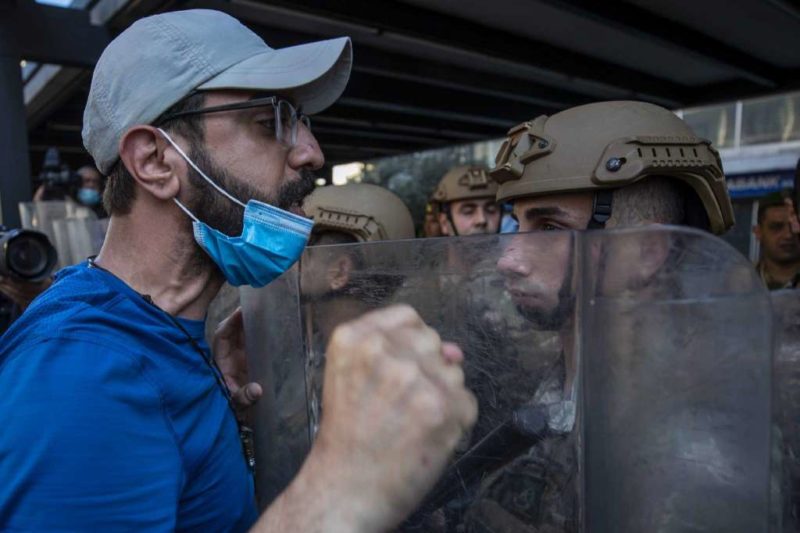 Army soldiers face off with an anti-government protester during May Day protests near the Lebanese Central Bank in Beirut, Lebanon, Friday, May 1, 2020. Hundreds rallied outside the country’s central bank and in other parts of the country a day after the prime minister said he’ll be seeking a rescue program from the International Monetary Fund to deal with a spiraling economic crisis.
Share:

BEIRUT, May 28 – Lebanese lawmakers are awaiting recommendations from the IMF to include in a draft law which blocks capital transfers from Lebanon for all but limited reasons, one of the MPs said on Thursday, as Beirut continues its talks with the Fund for aid.

Lebanon is in throes of an acute financial crisis seen as the biggest threat to its stability since the 1975-90 civil war. The local currency has lost more than half of its value since October as hard currency has become ever more scarce and depositors have been frozen out of their accounts.

With no law to stop capital flight, banks have been applying informal restrictions on cash withdrawals and blocking most transfers abroad since the crisis erupted. But critics say these restrictions have been selectively applied and money has continued to leave the system.

The draft allows annual transfers up $50,000 for reasons including medical bills, loans, foreign taxes and the purchase of essential goods. It would be in place for one year and could be extended.

“The aim is prevent selective transfers of funds done by the banks for some privileged clients – transferring millions abroad for some while some here cannot get $100 from their account,” Aoun said.

“We have to integrate many remarks, including from the IMF,” he said. “We were informed by the (government) negotiation team yesterday that (the IMF) have some and that they will transmit them to us when received,” he said. “We will be working on it in the coming two weeks, maybe more.”

The government discussed the law in talks with the IMF on Wednesday, the Finance Ministry said.

The restrictions would not apply to funds transferred into Lebanon from Oct. 17, 2019, the date of the eruption of mass protests against the ruling elite, the shock that tipped Lebanon into a full-blown crisis.