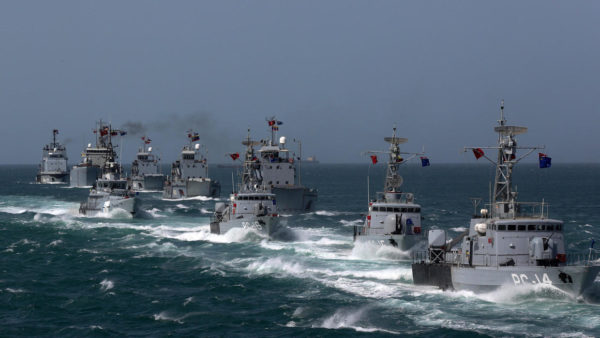 Venezuelan Navy frigates, like these in a 2019 exercise, are being used to escort Iranian tankers carrying badly needed fuel to port in VenezuelaZurimar CAMPOS Venezuelan Presidency/AFP
Share:

The first of five Iranian tankers carrying much-needed gasoline and oil derivatives has docked in Venezuela and a second one entered its waters, the government said on Monday amid concern in Washington over the burgeoning relationship.

“Images of the arrival of the first ship ‘Fortune’ at our refinery in El Palito. We keep going and WINNING!” wrote Oil Minister Tareck El Aissami on Twitter.

The Fortune arrived in Venezuela’s territorial waters on Saturday night, escorted by the Venezuelan navy.

The navy on Twitter said its ships were escorting a second tanker, the Forest, which it said entered the country’s waters on Monday.

The United States has closely monitored the shipments, concerned that Iran and Venezuela — both under US sanctions — were taking their longstanding ties to another strategic level.

The Fortune docked at the El Palito refinery port in the northern state of Carabobo.

The vital shipment arrives during a coronavirus lockdown at a time of chronic fuel shortage in the crisis-wracked South American country.

Venezuela boasts the largest proven oil reserves in the world, but production has plummeted under the current regime and its oil exports have been hampered by US sanctions.

The other Iranian tankers — Petunia, Faxon, Clavel and Forest — will arrive in the next few days, state television said.

The fleet is carrying around 1.5 million barrels of gasoline, according to press reports.

Tehran had warned of “consequences” if the US stopped the ships from reaching their destination.

Iran and Venezuela have had close relations since the late socialist leader Hugo Chavez took power in Caracas in 1999.

The US has imposed sanctions on Venezuelan oil exports, starving the government of President Nicolas Maduro of vital income.

Venezuela has been in recession for six years, its economy in shambles and its citizens struggling with shortages of basic necessities such as food and medicines.

Venezuela is almost entirely dependent on its oil revenues but its production has fallen to roughly a quarter of its 2008 level.

Maduro’s government blames that on US sanctions, including against state oil company PDVSA, but many analysts say the regime has failed to invest in or maintain infrastructure.

Last month, the oil ministry revealed that the price of Venezuelan oil had fallen to its lowest level in more than two decades, at less than $10 a barrel. Last year it averaged $56.70.