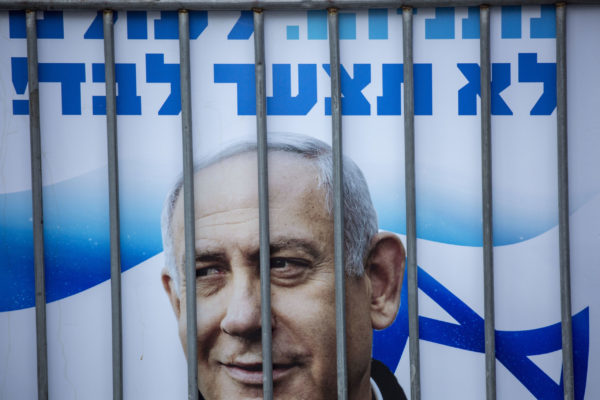 A banner of Israel’s Prime Minister Benjamin Netanyahu is behind a a barrier during a protest by supporters of Netanyahu outside his residence in Jerusalem, Sunday, May 24, 2020. Israeli Prime Minister Benjamin Netanyahu was heading to court to face corruption charges in the first criminal trial ever against a sitting Israeli leader. The Hebrew writing say ” Netanyahu. you will never walk alone”. (AP Photo/Ariel Schalit)
Share:

Just a week after being installed for a fifth term, Israel’s longest-serving leader will head to Jerusalem District Court for the reading of the charges against him on the trial’s opening day.

Israelis have grown accustomed to seeing their politicians hauled into court — former Prime Minister Ehud Olmert was jailed for bribery and ex-President Moshe Katsav served time for rape. But Netanyahu has the distinction of being the country’s first sitting leader to be tried for a crime.

For years, as he faced first accusations of wrongdoing and then a formal indictment, Netanyahu’s mantra has been, “there will be nothing, because there isn’t anything.” After entering the court, he defiantly revived longstanding allegations that media, police and prosecutors have colluded in “baseless” cases to try to hound him out of office, having failed to do so at the ballot box.

In a video published by Kan News, opposition protesters were seen opening a bottle of champagne, in celebration of the long-awaited start of the trial.

“The goal is to overthrow a strong right-wing prime minister,” he said in a statement approaching 15 minutes, asking that his trial be broadcast live.

The 70-year-old prime minister goes to trial as the country tries to recover from more than a year of political gridlock and the impact of the coronavirus, which has sent unemployment soaring and threatens a recession. While Netanyahu says the proceedings won’t distract him from the business of governing, they are getting under way as he will be called upon to make decisions of grave consequence, including how to get the battered economy humming again and whether to proceed with his controversial vow to annex some land the Palestinians want for a state.

“This is creating significant challenges for the way the system actually operates, because up until now, the norm has been that when a senior state official is facing serious charges, then he either resigns or is being forced to resign or is voted out of office, and then is left to deal post-service with the criminal law fallout,” said Yuval Shany, vice president of research at the Israel Democracy Institute research center.

“And here we’ve had this exceptional situation where Netanyahu has refused to resign and where the electorate and the political system has come to terms, more or less, with the idea that he will have the trial while serving in office,” Shany said.

Earlier this month, the country’s High Court of Justice ruled that the charges against Netanyahu were no impediment to his continued rule. His trial begins just hours after he convened his new cabinet for the first time.

Hours before he arrived at the courthouse, hundreds of loyalists gathered outside armed with megaphones, placards and blue-and-white Israeli flags. “Shame, shame, shame,” chanted the pro-Netanyahu protesters, who say he shouldn’t have been brought to trial at all. “Netanyahu, the nation is with you,” read one of their signs.

Protesters were outnumbered by the dozens of local and foreign journalists installed in two rooms where they were to watch the proceedings on closed-circuit TV, beginning at 3 p.m. local time. Netanyahu’s long tenure — he’s been in office a combined 14 years — and his high international profile have created great global interest in his trial. Media are not to be allowed in the courtroom.

Security predictably was tight, with pairs of police officers stationed along the road to the courthouse. At least one sniper was stationed on the roof of an adjacent building.

WHile Netanyahu claims he’s the victim of a political witchhunt,
The indictment on bribery, fraud and breach of trust charges presented in November paints a different picture, one of a man of expensive tastes who abused his position to illicitly accept — and at times demand — fine wines and cigars from billionaire friends.

As he sought to hold on to power, he sacrificed the integrity of his office to win favorable media coverage, prosecutors also charged. He’s accused of redefining Israel’s regulatory landscape to benefit one media publisher, and weighing proposed legislation that would have favored another.

The trial before three judges threatens to end his political career and leave his legacy in tatters.

Netanyahu had asked to sit out the opening day of case 67104-01-20, when he won’t be testifying, arguing that his security detail would compromise Health Ministry guidelines on coronavirus-related social distancing, but the court denied his request. The start of his trial had already been delayed for two months on virus-related grounds, after his handpicked previous justice minister put the courts on an emergency footing, citing the health crisis. The proceedings could spool out for years.

In the runup, Netanyahu’s allies launched a campaign to try to discredit the man who indicted him, Attorney General Avihai Mandelblit, who last week filed a complaint with police over threats he’s received. The Jerusalem Post reported that he presented police with screenshots from his phone showing messages such as, “Die, you and your children, we will get to you during a protest.”

The Ynet news website reported on Sunday that security has been assigned to the prosecutor in the case. Mandelblit has had bodyguards for years because of the incitement against him.

Netanyahu’s legal entanglements spilled over into the political arena as staying in power became his top strategy to bolster his prospects in court. Israel’s government was hamstrung for more than a year as he shepherded voters through three inconclusive elections in which the graft suspicions against him loomed large.

In the end, it was the threat of a fourth round of voting and the ravages of the coronavirus that offered Netanyahu a lifeline.