The Death of Lebanon’s Middle Class 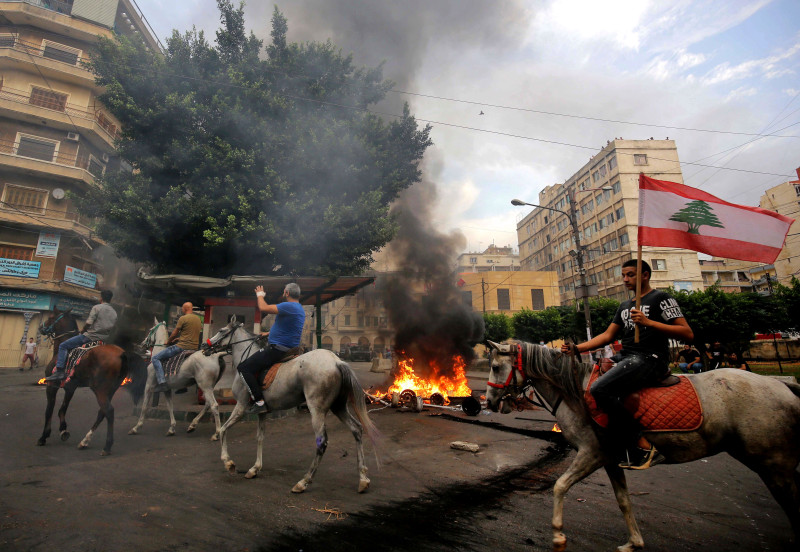 Lebanese protesters ride horses past burning tires in front of the house of former sports minister Faisal Karami, during a protest against dire economic conditions in the coastal city of Tripoli to the north of Beirut, Lebanon on October 18, 2019 (Photo by Ibrahim CHALHOUB / AFP) (Photo by IBRAHIM CHALHOUB/AFP via Getty Images)
Share:

A country with a proud history of trade and commerce is starting to crumble into permanent poverty.

TRIPOLI, Lebanon—In the second-biggest city in Lebanon, activists are on a mission. They are scouting Tripoli’s middle-class neighborhoods, lined with well-kept apartment buildings and designer boutiques, for families who desperately need help but are too embarrassed to ask for it. The activists’ charity efforts had originally been concentrating on outreach to Syrian refugees.

But over the last few months, as the Lebanese lira devalued by 60 percent, precisely as the pandemic lockdown shuttered businesses and produced mass layoffs, charity workers have learned that poverty has become a far more widespread experience. The beautiful exteriors of Tripoli’s buildings are increasingly a facade masking despair. It is a new experience for residents of the city and the country.Trending Articles

Grocery store owners and pharmacists in most parts of the city have tens or hundreds of open tabs by households unable to pay their bills. These essential service providers have been recruited by activists as providers of local intelligence. They share sensitive information, including names and addresses of indebted families, with activists on the condition that the identities of the borrowers must never be revealed. It is a matter of shame to incur debt among the Arab middle classes, and any form of public acknowledgment of dwindling fortunes can lead to catastrophic collapses of social standing.

The humanitarians, also locals, understand the predicament. They are quietly handing out little white envelopes with $350 to $550 in cash, donated by Tripolitans abroad, to some of those in need. The interaction is brief and furtively carried out, usually between a female activist and the woman who manages the household, on the understanding that men in the house must never find out.

Hala Kabara, an activist with the Tripoli-based Sanobel Aid organization, recounted many such experiences. “Lebanon’s middle classes were not rich but managed to pay house rent and send their children to decent schools. It is much harder now,” she said. “We have given money to about a hundred such women, but they were ashamed of it. One of them just cried and said thank you.” Fida Jundi Hajjeh, Kabara’s colleague and the manager of the NGO, said Lebanon’s economic crisis is crushing the extremely poor but it is also biting the middle classes. The impact is hard to see but heard loud and clear in the roar of protesters who engulfed city squares even amid the coronavirus lockdown. “There is no middle class left. There are only low-income socioeconomic groups struggling to make ends meet,” Hajjeh said. “You can see unemployed men loitering around everywhere you go.”

Lebanon, historically a land of seafarers and traders on the Mediterranean, has maintained itself as a middle-income nation in modern times. But a country that hitherto sought international aid for almost 2 million Syrian and Palestinian refugees now finds that 75 percent of its own population is in need of assistance, most of whom previously hailed from the middle class. They have enough to buy bread, unlike income groups below them, but are running short of cash to pay phone bills and purchase fuel, detergent soap, and other such daily necessities.

Roy Badaro, a Lebanese economist, said that until recently 65 percent of Lebanon’s population belonged to the middle classes. But the class structure in Lebanon was collapsing fast. “The middle class has lost approximately two-thirds of its purchasing power and moved to the low end of the spectrum,” Badaro said. “When a middle class tends to almost disappear in any country, it brings a total imbalance of the whole system and a social disruption, which could lead to anywhere.”

Lebanon was undergoing a crisis long before the upset caused by the coronavirus pandemic. Its genesis hails back to the 1990s, when the country had to be rebuilt after its civil war during the previous decade. But then as now, the country exported next to nothing and imported a lot, rendering public coffers empty.

In 1997, the country lured the diaspora to invest back in Lebanon by fixing the exchange rate at 1,500 Lebanese liras to the U.S. dollar and, by doing so, minimized depositors’ risk. But as the economy stagnated, particularly after the Arab Spring and Syrian civil war began, successive governments overspent and failed to carry out reforms, and a lethal concoction of corruption and clientelism impeded the growth of the economy. To keep the currency peg, the central bank relied on financial engineering, offering unsustainably high interest rates to big depositors in what has been described as a state-sponsored Ponzi scheme. When the real-world economy tanked, the banks were left exposed, and customers panicked. As they rushed to withdraw their money, the banks imposed stern capital controls. Now, ordinary Lebanese do not know whether they will ever get their money back. Moreover, the dollar shortage led to an increase in its value and a consequent decrease in the lira’s, reducing the value of the currency most Lebanese earn in.

Lebanon is now in dire straits. According to a warning by the World Bank in November, poverty in Lebanon was expected to rise from 30 to 50 percent; that figure is expected to rise way beyond the halfway mark once the effect of the devaluation of the currency and joblessness created by the pandemic is factored in. In more bad news, while economies across the world are expected to contract this year, the International Monetary Fund (IMF) has forecasted a 12 percent contraction for the Lebanese economy. In March, for the first time, Lebanon defaulted on its Eurobond debt of $1.2 billion as a way of keeping money inside the country to pay for basic services. However, that is feared to have further reduced its credibility among creditors. Meanwhile, the country’s debt remains the third-highest in the world, equivalent to 170 percent of its GDP.

The Lebanese government recently began talks with the IMF in hopes of agreeing to a bailout. It sought a $9 billion loan from the IMF and asked the European nations to release $11 billion in funding promised back in 2018 to resuscitate the ailing economy. But in the absence of reforms to deal with cronyism and endemic corruption, the international community has held back. Moreover, experts say that any deal with the IMF would be linked to austerity measures that may not sit well with the protesters. Nasser Yassin, a professor at the American University of Beirut, said: “The austerity measures will include cutting jobs in the public sectors, such as of teachers and others. This will, consequently, lead to popular protests and major pushbacks from unions and professional groups.” Even if the IMF’s conditions are acceptable and the talks succeed, it will be long before the people on the streets can derive any benefit.

The poor and the lower-middle class are in urgent need of pecuniary support. They are the worst-hit and, unlike the middle classes, cannot afford a veneer of respectability. They are forced to line up outside soup kitchens, even elbow each other, to get their hands on a loaf of bread. Downtown Tripoli, densely packed with glorious 14th-century Mamluk architecture, is among the poorest parts of Lebanon; 60 percent of the population here earned a dollar a day even before the current crisis. The residents who used to love to indulge in stories of former glory have lost confidence that achievements of the past will one day ensure a return to good times. One man was killed in the protests last month as thousands took to the streets chanting, “We are hungry.”

Tripolitans had hoped their harbor—the second largest in Lebanon and merely 19 miles from the Syrian border—would become the hub for Syria’s reconstruction, thus saving the city itself. But reconstruction in Syria is still nowhere in sight. For now, it seems, the people of Tripoli, as of the rest of the country, have only each other to rely on.

Abu Saad lives near the old souk in downtown embellished with ruins. There were no jobs, so he did what most Lebanese do—drove around his family car as a taxi. But he did not have the required permits, and his vehicle was impounded. He needs to pay 400,000 liras, or $100 according to the current market exchange rate, to pay the fine and regain his livelihood. He does not have the money. The father of four now banks on food from charitable organizations and for the rest from his extended family, yet he expects nothing from the government.

“The government, they are dead to us,” he said. “They never cared and never will. We will challenge them on the street.” That Lebanon’s protests will continue to gain pace is among the country’s few certainties.

Anchal Vohra is a freelance correspondent for Al Jazeera and regularly writes for Foreign Policy. She is a  Beirut-based journalist covering the Middle East and South Asia. Twitter: @anchalvohra