Discrimination: Outraged Druze say “Israel threw them under the bus” 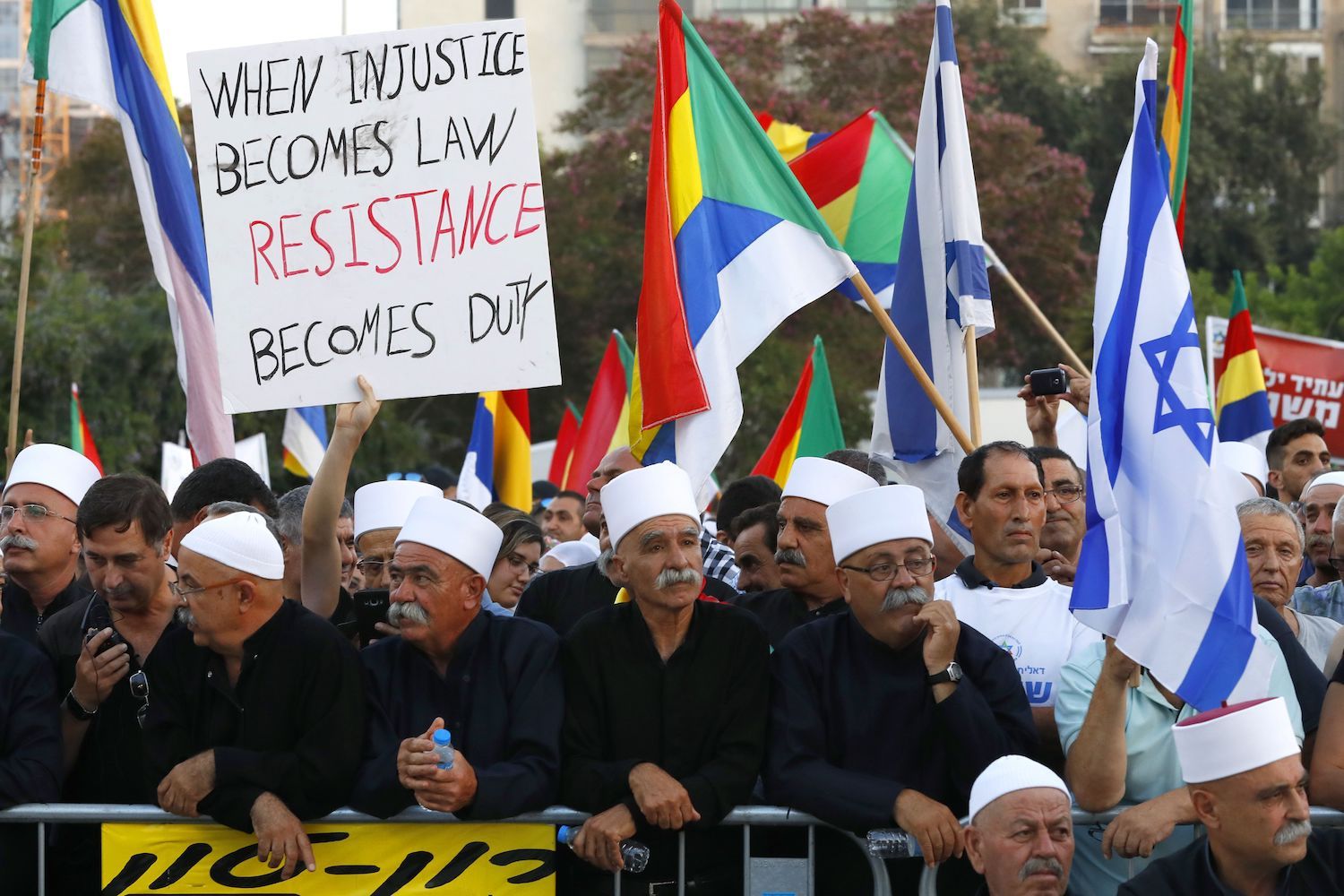 File photo: Members of the Israeli Druze community and their supporters demonstrate during a rally to protest against the ‘Jewish Nation-State Law’ in the Israeli coastal city of Tel Aviv on August 4, 2018. – Tens of thousands of Israeli Druze and their supporters rallied in central Tel Aviv today to protest the new law they say makes them second-class citizens, an AFP reporter said. The law, which passed last month and is part of Israel’s so-called basic laws, a de facto constitution, proclaims the country the nation state of the Jewish people. (Photo by JACK GUEZ / AFP) (Photo credit should read JACK GUEZ/AFP/Getty Images)
Share:

Faced with problems brought on by the coronavirus pandemic and delays in the transfer of funding because of the yearlong political imbroglio, Druze and Circassian local authorities are already on the verge of bankruptcy.

While Israel is completely absorbed by the coronavirus outbreak, the Druze and Circassian communitieshave reached a new pressure point. On May 3, the Druze community responded by launching what they call a “month of rage” to protest their dire circumstances. The protest includes a strike until further notice in all Druze villages, including in schools and other educational institutions. On May 5, dozens of activists blocked a highway in the north of the country, as a sign of protest. Leading this general strike is the “Forum of Mayors of Druze and Circassian Local Authorities.” On May 3, they gathered in Jerusalem, in front of the prime minister’s office, carrying signs with slogans like, “Did you betray me, brother?” and “We will not be the next Southern Lebanon Army.”

This mention of the SLA is particularly painful to Israeli leaders. It refers to a militia sponsored by the Israel Defense Forces (IDF), which operated in southern Lebanon from the late 1970s until Israel’s withdrawal from Lebanon in May 2000 and the abandonment of the SLA by Israel and the IDF. With these signs, the Druze and Circassians are saying that they feel just as betrayed as those Israeli allies in Lebanon.

The outrage that the community feels is a direct consequence of the political chaos in Israel, which has already lasted for over a year. The coronavirus pandemic only intensified the growing sense of urgency. For several decades now, budgetary funding for the Druze community at large and their various towns and villages in particular has been included in a series of five-year plans for the community. The last of these, which was approved in June 2015, amounted to 2 billion shekels ($570 million). When the plan expired in December 2019, Israel was already in the midst of the current political chaos. While Prime Minister Benjamin Netanyahu’s transition government did want to pass a new “five-year plan,” his legal advisers cautioned him against it, arguing that it could be interpreted as an election bribe.

Nevertheless, the government did approve the transfer of 230 million shekels ($65.5 million) to the Druze community as a stopgap measure for the next three months, until a new government is formed. Then the coronavirus struck, and even that sum wasn’t transferred to the Druze community. Hamoud Jabbar, head of the Forum of Mayors leading the protest, told Al-Monitor, “We are in a state of total collapse. Municipal property taxes dropped sharply as a result of the coronavirus outbreak, leaving us without a cent. We have no money to collect garbage, pay for electricity or cover routine costs. We are talking about 16 local authorities that are on the verge of bankruptcy.”

According to Jabbar, the average rate of unemployment in these local authorities is already above 30%, while property tax payments have dropped by about 70%. At the same time, the Ministry of Interior reduced supplementary funding for local authorities by 15%. Jabbar noted that so far, local authorities have continued covering the costs of programming funded by the five-year plan, but the sharp drop in income — coupled with an increase in costs of education, welfare and dealing with the coronavirus — have resulted in a 50% budgetary deficit in some local authorities. Unable to pay salaries and suppliers, these authorities have, in effect, ceased to function.

Actually, the state did provide some funding to local authorities, when it became clear that they would be unable to collect property taxes, especially from business owners. The government promised to give up on about 2.82 billion shekels ($802 million) in property taxes by businesses, with government funding compensating the local authorities for most of the losses. But the Mayor’s Forum claims that they received only a fraction of this financial assistance. A query to the prime minister and minister of interior, sent in the last few days by the forum, claims that of the budgeted assistance to all local authorities, the Arab local authorities will receive just 47 million shekels ($13 million). In other words, less than 2% of the general sum allocated.

“They threw us under the bus,” Jabbar said angrily. “We are an integral part of this land. We gave our lives to this country. I myself spent 25 years serving in the IDF. But nobody cares about us. It is absurd to think that the Arabs and Bedouins have no problems, because their five-year plan only ends in December 2020. The government just takes us for granted. The bureaucrats at the Finance Ministry are even playing with the 230 million shekels [$65 million], which was already approved as an interim measure.”

Jabbar claims that the Druze community is caught in a longstanding crisis. He noted that the situation got worse as a result of the Nationality Law, which emphasizes the Jewish character of the State of Israel, and again now as a result of these budget problems. “The Israeli government turned its back on us with the Nationality Law. Then the Kaminitz Lawdiscriminated against us by making it more difficult to develop our towns and find housing solutions. We feel like we are imprisoned in tiny villages without any solutions to our housing problems. Not a single new Druze town or village has been established since the founding of the state. We feel like we are a part of this country, but it looks like the government feels that we aren’t.” (The Kaminitz Law imposes stricter sanctions on illegal construction, thus targeting especially construction violations in the Arab and Druze communities.)

He said the struggle will not end until there is a significant change in the government’s attitude toward the Druze. “2020 is a year of change as far as we are concerned. The Jewish community is with us. We want to toss out all those five-year plans and makeshift budgets once and for all. We want them to include the budget for the Druze community in the state budget, so that we don’t have to keep coming back to plead for money like a bunch of beggars. We are more Israeli than the Israelis. We are the flesh and blood of this land. We fight its wars. We are an integral part of it. That’s why we decided that this time we will protest without any time limits. It will be the fight of our lives. It’s now or never.”