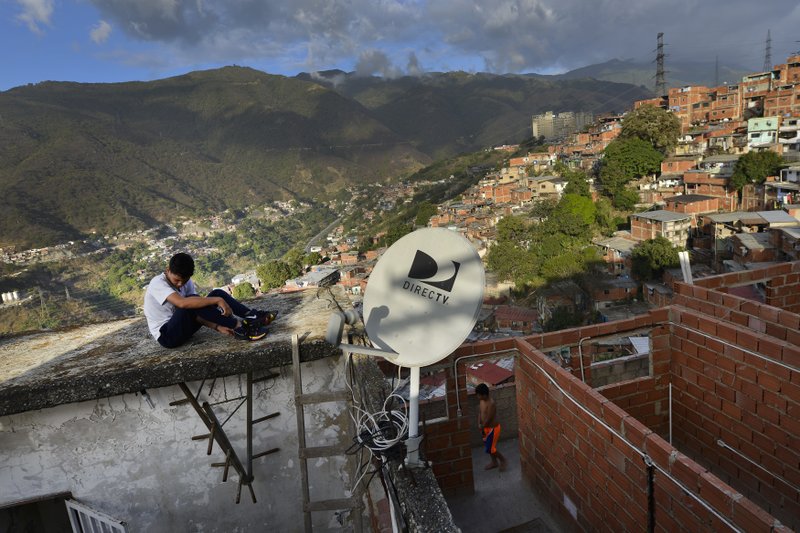 FILE – In this Jan. 9, 2020 file photo, a DirectTV dish stands on home in the Catia neighborhood of Caracas, Venezuela. AT&T, one of the last major American companies still operating in Venezuela, said Tuesday, May 19, 2020 it will immediately abandon Venezuela’s pay TV market, as U.S. sanctions prohibit its DirecTV platform from broadcasting channels that it is required to carry by the Venezuelan government, making it impossible to comply with the legal requirements of both countries. (AP Photo/Matias Delacroix, File)
Share:

MIAMI (AP) — AT&T said Tuesday it will immediately ditch Venezuela’s pay TV market as U.S. sanctions prohibit its DirecTV platform from broadcasting channels that it is required to carry by the socialist administration of Nicolás Maduro.

The Dallas-based company’s closing of its Venezuela unit is effective immediately.

It follows a decision by the Trump administration not to renew a license it had granted AT&T to continue carrying Globovision, a private network, sanctioned by the U.S., owned by a businessman close to Maduro who is wanted on U.S. money laundering charges, three people familiar with the situation told the AP. They spoke on the condition of anonymity to discuss U.S. government licensing activity.

AT&T joins a number of other U.S. companies — General Motors, Kellogg Co. and Kimberly-Clark — that have abandoned Venezuela due to shrinking sales, government threats and the risk of U.S. sanctions. Around 700 Venezuelans depended on the unit for employment.

“Because it is impossible for AT&T’s DIRECTV unit to comply with the legal requirements of both countries, AT&T was forced to close its pay TV operations in Venezuela, a decision that was made by the company’s U.S. leadership team without any involvement or prior knowledge of the DIRECTV Venezuela team,” the company said in a statement.

At nighttime Tuesday, residents in Caracas started banging on pots and pans for nearly a half hour to spontaneously protest a decline in public services. Some yelled “I want my DirecTV” amid chants against Maduro.

AT&T has a 44% share of the pay TV market and its departure is likely to hit hard working-class barrios of larger cities and the interior that depend on DirecTV for access to information and entertainment.

An Associated Press investigation from January found that AT&T had been under increasing pressure from the Trump administration to stand up to Maduro’s censors, who since 2017 have ordered the removal of some 10 channels, including CNN en Español, that had broadcast anti-government protests.

Local regulators accuse the channels of violating the Law on Social Responsibility on Radio and Television, which seeks to guarantee socially responsible programming but that press freedom groups consider it a tool to muzzle critical coverage due to its ambiguous language and heavy penalties. DirecTV is also a major platform for the broadcast of state-run TV outlets criticized by the opposition as propaganda.

A never-implemented plan promoted by the State Department would have forced AT&T to pull the plug on Globovision and the state-run channels while restoring some of the banned international news channels, according to five people familiar with the discussions cited in the earlier AP investigation.

AT&T hasn’t made money from its Venezuelan operations for years due to strict government controls that keep the price of its packages artificially low — a few pennies per month. The situation has become so dire that DirecTV in 2012 stopped importing set-top boxes, choking its growth. In 2015, it wrote down its assets in the country by $1.1 billion.

But the company was reluctant to close down its operations in Venezuela because of its market share — the largest it has anywhere in the world — and its commitment to a satellite broadcast center from which DirecTV beams about a third of its programming to several parts of South America.

An AT&T executive said that while its broadcast signal in Venezuela will stop working Tuesday, the company has enhanced other facilities in the region to ensure that service continues uninterrupted throughout South America. The executive spoke on the condition of anonymity to discuss internal procedures.

AT&T’s departure deprives many Venezuelans of what had been a cheap form of entertainment in a nation ravaged by 2 million percent hyperinflation. Among them is Maduro himself, who at a recent press conference boasted that he’s a fan of CNN’s English language channel, even rattling off the channel — 706 — where it appears on DirecTV’s platform.

Socialist party boss Diosdado Cabello on Twitter said “no blockade will censure us” and invited his followers to watch his weekly TV program that is broadcast on state TV on a streaming platform.

There was no immediate comment from the Trump administration.

With AT&T’s announcement Tuesday, however, some DirecTV subscribers reported that their service immediately went dark, displaying the message: “Channel not available.”

Pedro Zambrano, a taxi driver waiting on a client at a Caracas supermarket, said he has subscribed to DirecTV for years to watch his favorite series and tuned in nightly to the German government’s Deutsche Welle channel, which broadcast international news in Spanish.

The 54-year-old said the loss of DirecTV amid the coronavirus pandemic, where he and others are forced to spend long stretches at home, is only likely to further erode a quality of life that has worsened in recent years by frequent power outages and shortages of water and gasoline for his car, which provides his living.

“I don’t know how a person can live with dignity in a country like this,” Zambrano said. “Well, what can I tell you? We’re sunk.”