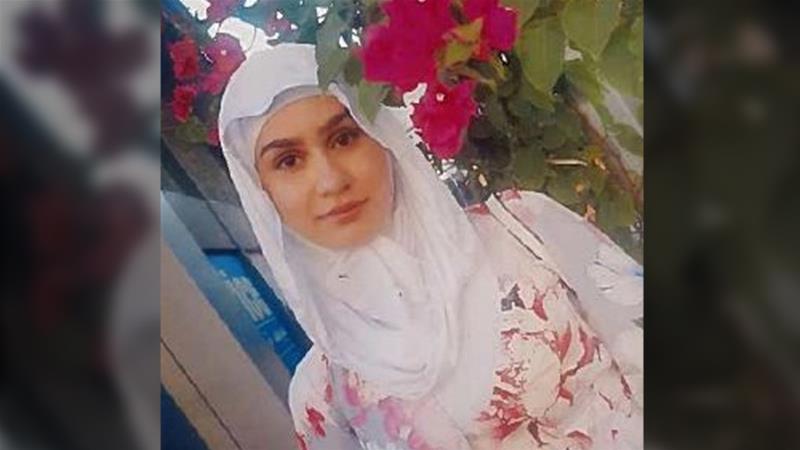 Aya Hachem was a law student who volunteered with a children’s charity [Handout/Lancashire Police]
Share:

Aya Hachem, a law student in north England, was an innocent bystander killed while grocery shopping in Ramadan.

Three men suspected of murder have been arrested after the death of a 19-year-old woman in Blackburn, north England – a killing that has shocked the country’s Muslim community.

Aya Hachem, who hailed from a Lebanese refugee family, was a second-year law student at the University of Salford and a volunteer with the Children’s Society charity.

Police have said she was not the “intended target” of the attack, as they sought to ease fears spreading on social media that her death was the result of a racist assault.

“There is no evidence to suggest Aya was the intended target of this attack and every indication is that she was an innocent passerby,” Lancashire police said. “We are aware of rumours circulating on social media, and we would stress that we are not treating the incident as terrorism-related and do not believe it was a racially-motivated attack.

“First and foremost, our condolences are with her family, who have lost their daughter during the holy month of Ramadan.”

Aya was shot in broad daylight while shopping at around 3pm on Sunday. She had been walking to a supermarket when shots were fired from a nearby car.

“Sadly, one of them struck and killed her,” the police said.

The men arrested were all in their 30s.

Terry Woods, of Lancashire Police, said: “This was an appalling and senseless attack on an innocent young woman, whose life was cut short.”

Hachem was the eldest of four siblings and reports have said her body is being flown to Lebanon to be buried.

In a statement, her family said: “Aya has been taken from us in the most horrific circumstances.

“We are absolutely devastated by her death and would like to take this opportunity to plead with any members of the public who may have any information, however small that may bring those responsible to justice.”

Mark Russel, head of Children’s Society, paid tribute, saying: “We are deeply saddened to learn of the death of one of our young trustees, Aya Hachem. She was a truly remarkable young woman, and an inspiring voice for children and young people. Our thoughts are with her family at this awful time.”

Meanwhile, two fundraising pages have been set up in honour of Hachem.

One raising funds to build a mosque in her name has already achieved the £30,000 target ($37,000), while another, by Global One, a UK-based NGO, seeks to remember Hachem by building water wells for vulnerable women and girls in water-poor communities.