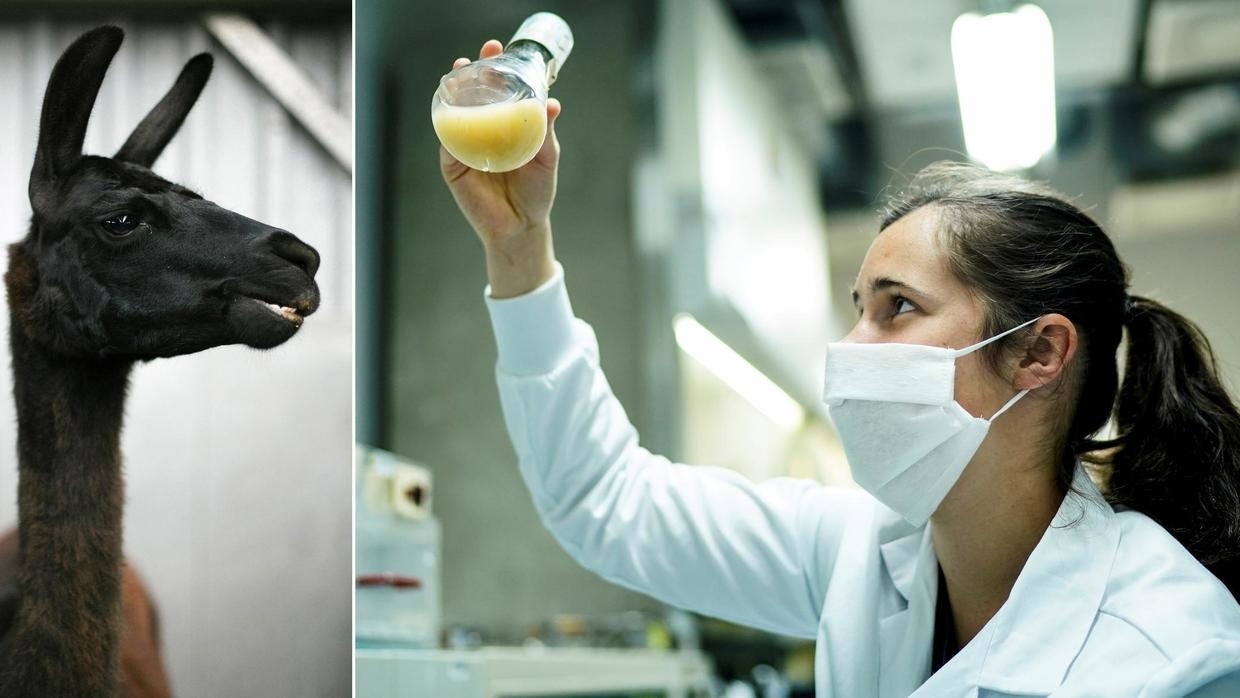 COMBO) This combination of photos created on May 8, 2020 shows an undated handout photo provided by the VIB-UGent Center for Medical Biotechnology on May 8 showing 4-year-old llama called Winter, at an undisclosed location (L), and a photo taken on May 8, 2020 of doctoral researcher Dorien De Vlieger examining a test tube for her research on llama antibodies to find a treatment for COVID-19 Kenzo TRIBOUILLARD AFP
Share:

Scientists the world over are scrambling to perfect an anti-viral treatment for the novel coronavirus, and following what might seem to be some unusual trails.

Belgium’s top researchers insist that their efforts to isolate an anti-body grown in a llama — the Andean beast of burden — is based on a solid lead.

Professor Xavier Saelens of the Flemish Institute of Biotechnology (VIB) in Ghent told AFP, that if it works it would not be the first time the camel-like beast has helped out.

“There’s already a drug on the market that came from a llama antibody,” he said, citing caplacizumab, used in the blood disorder thrombotic thrombocytopenic purpura.

Now he believes his team are on the threshold of another “great breakthrough” in the hunt for a treatment, this time for those caught in the coronavirus pandemic.

Saelens and his Belgian colleague Nico Callewaert are working with a US team from the University of Texas Austin, led by professor Jason McLellan.

A female llama called Winter has been injected with a protein present on the surface of the novel coronavirus, first detected in China last year, and has reacted by developing antibodies.

These in turn appear capable of playing a role in shielding the carrier and neutralising the threat of the virus.

“The llama had an immune response to this protein,” said VIB researcher Dorien De Vlieger.

“Our goal is to produce an anti-viral treatment would would involve directly administering these antibodies to patients,” she said.

The first testing on human patients could begin “before the end of the year.”

Researchers elsewhere are working on possible vaccines against the virus, which would trigger recipients to develop their own antibodies against the disease.

But this could take a long time and would not be useful for patients already infected with COVID-19.

An anti-viral treatment based on llama antibodies would not end the crisis, but it is a promising route towards a way of helping the already sick and slashing the death toll.

The VIB laboratory has a worldwide reputation in the field and operates independently of the pharmaceutical industry, as an academic institution affiliated with Ghent University.

Its researchers had a head start on the coronavirus, having begun the collaboration with the Texas team in 2016 targeting more general respiratory SARS-type diseases.

But the fast-spreading and deadly new outbreak caused them to step up their endeavours.

The antibody extracted from the llama bonds with a big area of the Severe Acute Respiratory Syndrome Coronavirus 2 (SARS-CoV-2) which causes COVID-19.

This prevents it from penetrating host cells and infecting the victim.

“It’s an important breakthrough in the fight against COVID-19,” said Saelens.

And what of Winter, the hero of the fight? She is being kept at a secret location within Belgium.

“We’re worried about animal rights activists,” said De Vlieger. “But we also have to do our best to keep her stress levels down.”