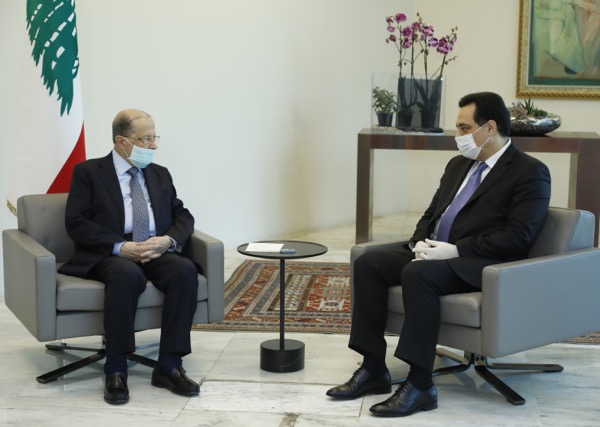 BEIRUT- A government plan for getting Lebanon out of a financial crisis is based on a shift to a flexible exchange rate, but in the “coming period”, and a currency peg will be maintained for now, Finance Minister Ghazi Wazni said on Wednesday.

The government approved the plan, which entails vast losses in the financial system, last week, announcing it would form the basis of aid negotiations with the International Monetary Fund.

The crisis is seen as the greatest risk to Lebanon’s stability since its 1975-90 civil war.

Prime Minister Hassan Diab said the plan was not sacred and could evolve, urging Lebanese to set aside differences during a meeting with some of the country’s fractious politicians.

The Lebanese pound has lost more than half of its value since October and depositors have largely been shut out of their savings as dollars have become ever more scarce. Inflation, unemployment and poverty have soared.

The pound has been pegged at 1,507.5 to the dollar since 1997 and the central bank supplies dollars at this price for the purchase of fuel, medicine and wheat. Dollars were changing hands at over 4,000 pounds on the parallel market on Wednesday.

The plan is based on “a policy of a flexible exchange rate in the coming period, in a gradual and studied way,” Finance Minister Ghazi Wazni told the meeting.

He gave no time frame for the change but said freeing up the exchange rate before restoring confidence and securing international support would lead to a big deterioration in the value of the pound and uncontrolled price rises of basic goods.

“We are forced in the current phase to continue in the policy of fixing (the rate),” he said.

The Diab government took office in January with backing from the powerful, Iran-backed Shi’ite group Hezbollah and allies including President Michel Aoun, the Christian Maronite head of state.

Speaking after the meeting, Samir Geagea, a Maronite rival to Aoun and Hezbollah opponent, said he would not support this or any other plan that did not start with serious steps to fight corruption and waste, including customs evasion.

These are widely seen as prime causes of the crisis, landing Lebanon with one of the world’s biggest public debt burdens. Lebanon defaulted on its sovereign debt in March.

“Time is very precious. The accumulated losses are very big. The situation is very painful, and the chance to rectify (it) will not last long,” Diab said.

Wazni said Lebanon had started negotiations to restructure its sovereign debt two weeks ago. Benefits of going to the IMF included securing financial support of $9-$10 billion, he said.

Critics of the plan include Lebanon’s commercial banks. The plan foresees them sustaining losses of some $83.2 billion.

The banking association is working on its own plan that aims to preserve some of its capital rather than writing it off as set out in the government proposals.