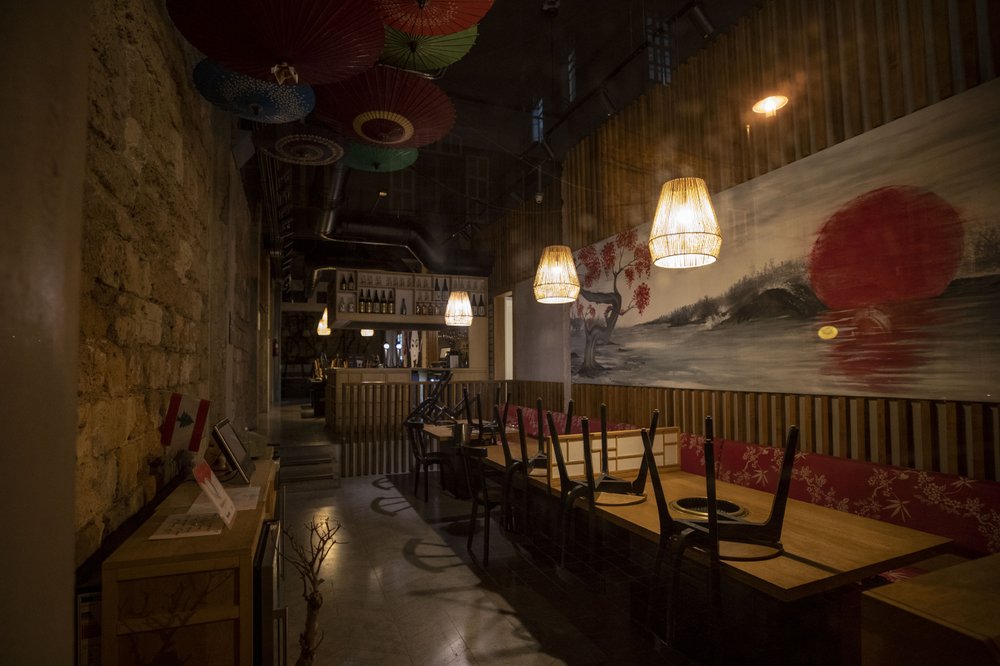 In this Sunday, May 3, 2020 photo, chairs are placed on tables in a closed restaurant during the coronavirus pandemic in a major nightlife hub, in central Beirut, Lebanon. The owners of some of Lebanon’s best-known clubs have pulled together a three-day non-stop virtual music festival. This time, 150 DJs from around the world are playing for a cause. They’re collecting donations for the thousands of servers, bartenders, waiters and other daily wage earners who have been without a job since coronavirus restrictions forced a shutdown in mid-March. (AP Photo/Hassan Ammar)
Share:

BEIRUT (AP) — It’s not just a lifestyle, it’s a livelihood. That was the motto used by some of Lebanon’s best-known nightclubs to raise money for thousands of bartenders, waiters and support staff who have been without a job since the country imposed a strict coronavirus lockdown in mid-March.

The club owners pulled together a three-day fundraising marathon: 150 DJs from around the world spun their records in five different virtual rooms over the weekend in a non-stop electronic music festival. By Sunday night, they had raised the equivalent of $36,000.

The initiative is unlikely to make a dent. The hospitality industry has been hit particularly hard by the government-mandated closures which followed a series of bad seasons. The pandemic delivered just the latest blow to an economy already devastated by the worst financial crisis since the country’s civil war days, which ended in 1990.

Lebanon is entering a new phase of the lockdown Monday, allowing restaurants to open at 30% capacity during the day. But many business owners say they won’t reopen because they would be losing more money if they operate under such restrictions during a faltering economy.

Maarouf Asaad, a 32-year-old bartender who was paid for one of the two months he stayed home, was expecting to return to work Monday, where his bar would operate as a daytime cafe. Then new government regulations Sunday ordered cafes to stay shut until June, along with clubs and bars. There was no explanation for the distinction between restaurants and cafes.

Asaad said his basic salary won’t keep up with new inflated prices while his customers will be feeling the pinch of the sudden severe currency depreciation. In recent weeks, the Lebanese pound lost nearly 60% of its value against the dollar and prices of basic goods soared.

“It won’t end even when I go back. It is not just coronavirus, it is also a collapsing economy,” Asaad said. “There will just be house parties like in Europe, and no one will be able to afford a drink at a bar,” Asaad said.

At least 150,000 people are employed in Lebanon’s hospitality industry. Some 25,000 of them already lost their jobs even before the pandemic. None are unionized and not all are insured or can even secure minimum wage.

The lockdown topped months of a spiraling economic crisis that already had a staggering impact on the hospitality industry, a resilient sector in this small Mediterranean country that survived political instability and contributed as much as 18% of the GDP in 2017, a peak year.

Around 800 small and medium businesses have folded between September and January, according to Maya Bekhazi, secretary general of the syndicate for owners of restaurants, cafe and bars.

Bekhazi said she expects losses for February and March to be “huge.”

And those still in business are struggling. Supplies are priced at the pound-to-dollar black market rate while restaurants and bars are still expected to use the official set rate.

“Every item I sell today I sell at a loss,” she said of her own business, a patisserie.

The International Monetary Fund projected that Lebanon’s economy will shrink 12% in 2020, nearly double the contraction of the year before.

The government on Friday formally asked the IMF for a rescue plan for the difficult years ahead.

Amid the gloom, the three-day Electronic Labor Day festival, launched May 1 to commemorate the international labor day, offered a non-stop party as immersive as any real clubbing experience in Lebanon could be.

With DJs from over 30 countries — including Germany, the United States, France, Egypt and Lebanon — the lineup rivaled Ibiza’s popular opening May parties. DJs played over footage from previous parties, replicating the club vibe at home.

Many DJs displayed signs saying “We Got Your Back.”