How a Lebanese city was pushed over the edge 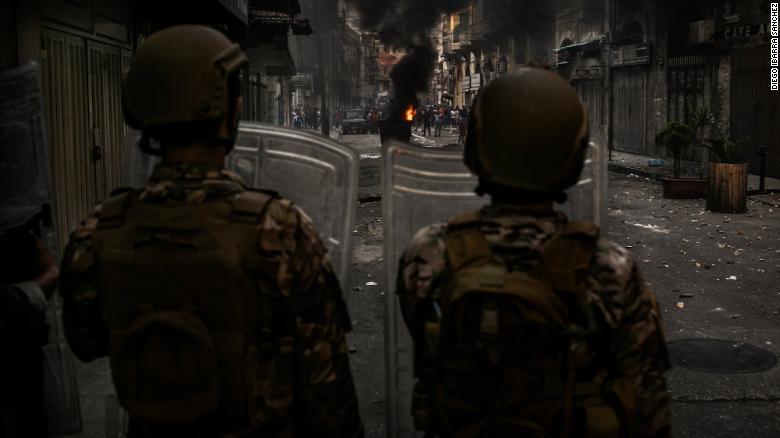 Protesters hurling stones at soldiers in renewed clashes triggered by an economic crisis, the crash of the local currency and a sharp increase in the prices of consumer goods in the northern city of Tripoli, Lebanon, the economic crisis has been exacerbated by a six-week-old lockdown due to the coronavirus pandemic. Tripoli, Lebanon. Diego Ibarra S??nchez for CNN
Share:

‘If your child is hungry, you will eat your rulers to feed your children’

Tripoli, Lebanon (CNN) — A large bag of the thistly gundelia plant arrives at Um Ahmad’s door as it does nearly every day. Wearing a double layered headscarf, she settles into a blue armchair. She has until the afternoon to trim the spines off the wild plant for her customers to cook.

“We work on the akoub (gundelia) so that we can live,” says Um Ahmad, using a pseudonym.

When visitors walk into her dark, cavernous room to meet her, she doesn’t even look up. A drama series blasts from an old TV.

“I get paid 10,000 liras for five kilograms of this,” she mumbles, peeling the stems of the spiny plant with a small curved knife. Because the Lebanese lira is in free-fall, her payment is worth just over $2.

Um Ahmad lives beneath a centuries-old souk (or marketplace) in Lebanon’s northern city of Tripoli.

Outside, the city roils with violent demonstrations, known as the “hunger protest.” These started just as Lebanon was loosening its coronavirus lockdown, and beginning to contend with poor living conditions exacerbated by the near shutdown of the economy.

Nightly confrontations between demonstrators and the Lebanese army have rocked Tripoli over the last week, turning it into the epicenter of the country’s renewed uprising against its political elite.

Protests against Lebanon’s political class, which has ruled the country since its civil war and is widely accused of corruption, engulfed its main urban centers in late 2019. At the time, tens of thousands of Tripoli’s protesters flocked onto the streets. The city was dubbed “the bride of the revolution,” both because of its energetic protests and because it was believed to have borne the brunt of political corruption.

Tripoli is the poorest city in Lebanon, despite being home to some of its most high-profile billionaires. A slum stretches across the banks of the city’s Abu Ali river, just minutes from pockets of extravagant wealth. The income disparity was always stark, but these days, Tripoli’s locals say it is unbearable.

Aich’s voice rises to a crescendo. As with many Tripoli natives, the conversation begins with the soft tones of a city folk known for their kindness to strangers, but quickly turns into a tirade about living conditions.

“The solution is for the army chief to round up all the politicians who robbed this country and to put them in jail,” says Aich. “They pillaged the country and killed it and killed its people.”

Calls for the army to deliver justice echo across Tripoli even as demonstrators hurl stones, fireworks and Molotov cocktails at the armed forces. The military has responded with brute force. It has fired tear gas and rubber bullets, and, in some instances, live fire, at protesters, killing one on Monday and wounding dozens over the last week.

“The army are our brothers. What we want is for them to join us, take the politicians from their houses, and throw them in the garbage dump,” says protester Ghassan, a 24-year-old handyman and a father-to-be who asked not to disclose his full name for security reasons.

“If your child is hungry, you will eat your rulers to feed your children,” he adds.

Lebanese Prime Minister Hassan Diab has called the demonstrations “natural” given growing economic hardship, but has accused rioters of infiltrating the protests in order to cause unrest. The Lebanese army also acknowledged the right to “freedom of expression” and cast suspicion on violent protesters. It said it would launch an investigation into Monday’s death.

Lebanon’s economy has taken a nose dive since last year. Before an uprising gripped the country in October 2019, the World Bank said nearly one third of the population was living under the poverty line. Earlier this year, the bank updated that statistic to 45% for the year 2020. Now, after government measures designed to slow the spread of the coronavirus halted the economy, Lebanon’s government believes up to 75% of the country needs aid.

It is a dramatic drop in living standards for a country which in 2018 had the highest GDP per capita among the Arab world’s non-oil producing nations.

In recent weeks, the Lebanese lira lost over half its value, hurting both merchants and consumers. Small shop owners are struggling to secure supplies, and the country’s growing legions of poor people can’t afford to buy them.

In Tripoli, many people say that most staple goods have at least doubled in price, making the working class increasingly reliant on aid from charities.

Amer El-Deek, 30, used to own a shoe stand and made ends meet with a daily income of $10. Now, he says, all he can do is beg and rely on food packages from an Islamic charity.

“We don’t know how we’re even alive,” says Deek, the father of a six-year-old. “I now go to sleep and think: God, I hope I don’t wake up. I hope I die tomorrow.”

When the “hunger protests” kicked off last week, few were surprised. “I see that a revolution of the hungry is coming,” Hezbollah-backed MP and former intelligence chief Jamil El-Sayyed tweeted in December.

The uprising’s largely peaceful protests turned violent after a nearly two-month respite due to coronavirus. In Tripoli, protesters staged large demonstrations outside politicians’ homes vowing to avenge their alleged corruption. Nearly every bank branch in the city has been damaged by the protests, with demonstrators voicing their fury at the banking sector’s discretionary capital controls.

On any given work day, long queues of people begging to withdraw their cash can be seen outside bank branches. Lebanese authorities have resisted calls to formalize capital controls, raising suspicions that the economic elite in Lebanon have been exercising their influence to remove their funds from the country, while small depositors are largely denied access to their life savings.

Young and old head to Tripoli’s protest sites after Ramadan’s Taraweeh prayers, which are performed after the fast is broken during the holy month.

They arrive on mopeds, gather in crowds and yell protest chants. Most do not wear face masks, and no one is observing government-mandated social distancing rules. That’s because most of the people on Tripoli’s streets believe that coronavirus doesn’t exist here.

The lockdown has stoked resentment, fueled rumors of a government conspiracy to further impoverish the poor and ultimately ignited the protests.

“We don’t have coronavirus here in Tripoli. Coronavirus is a heresy. (The politicians) made it up,” says one city native, Marwan el-Zahed.

Fourteen cases of the coronavirus have been reported so far in Tripoli. In total, Lebanon has had 740 confirmed cases of the virus and 24 deaths. It has received some credit for a largely successful bid to contain the virus.

Underground, Um Ahmad is too busy working on her gundelia to talk politics. She has also lapsed into disillusionment.

“My situation is just as you see it,” she says, gesturing to her home’s conditions. “Sometimes I empty the pulp of zucchini for people. But also that doesn’t come every day.”