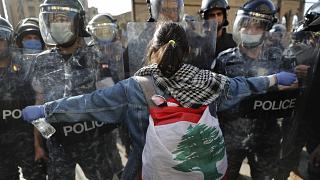 Protests have broken out in Lebanon despite the imposition of a pandemic lockdown, with banks vandalized by fire during two successive nights of unrest.
Share:

Riots are taking place in Lebanon because of the government’s failure to address deep-seated economic problems in the country, says an academic based at the American University of Beirut.

Protests have broken out despite the imposition of a pandemic lockdown, with banks vandalised by fire during two successive nights of unrest.

Rami Khouri, a professor of journalism at the university, said more than half the country’s population is living in poverty – but that the government treats them with “disdain”.

And he says factional infighting between different parties is adding to the sense of abandonment being felt by the Lebanese population.

“A majority of Lebanese, nobody knows exactly how many, 55, 65, 75 per cent are sinking into poverty and the government is not really addressing this issue,” Khouri said. “It’s a combination of the economic stress with the sense of a majority of the population that the government treats them with disdain.”

The Lebanese pound was already in trouble before COVID-19 but the pandemic has made things worse. The currency has lost 50 per cent of its value in the last six months, with banks putting limits on cash withdrawals. Lebanon has been in lockdown for more than a month