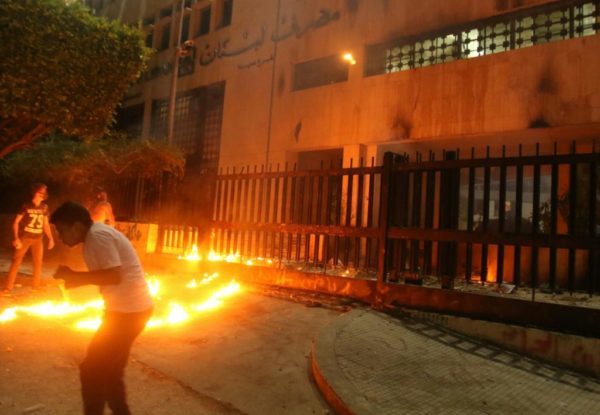 Lebanese protesters throw Molotov cocktails at the branch of the central bank in the southern city of SidonPhoto: AFP / Mahmoud ZAYYAT
Share:

Better late than never says Dr Ghassan Karam in his analysis of the Lebanese economic reform plan that was approved on Wednesday , but like every plan the most important is implementation. France said on Friday it was urgent that Lebanon implement reforms that were essential for the country’s recovery “It is on this basis that France stands ready to support the efforts of Lebanon,” Foreign ministry spokeswoman Agnes von der Muhll said in a statement.

A 52 page version of an economic reform plan was released on April 28, 2020 by the Lebanese cabinet. The cabinet did vote on April30, 2020 on some of the ideas in the plan and is expected to approve the others in the next few days without any major changes if any.

The most immediate reaction by most, irrespective of whether they support the plan or whether they oppose it, is that it is better late than never. That above sentiment carries within it lots of truth but is not always truly applicable. Delays in many cases can be very costly especially if the project at hand is a critical one. When time is of the essence then delays in implementing a solution can at times be counterproductive. If medical care is withheld from an 85 year old person that has a serious preexisting condition and that has been diagnosed with Covid-19 for say a week then such a delay is actually a death sentence. The current Lebanese problem has had some very clear signs of the severity of the situation if not properly addressed for months and even years. Delays in this case have not been helpful and they did aggravate the condition and challenges. One could even argue that most of the problems that Lebanon is currently facing would have been simpler and easier to handle had the elected officials acted responsibly and had the Lebanese voter held their feet to the fire. Very few countries would have permitted a simple problem of production of electricity to overwhelm a state for over 15 years. That is unconscionable. The same could easily be said about sovereign debt, foreign exchange rate, corruption, customs, border crossings and recycling to name a few issues.

The above is being mentioned in order to impress upon the cabinet and the readers that the myriad Lebanese problems in practically all fields, social, political and economic are systemic. This simply means that it would not be helpful to search for a solution for each of these issues that does not address the real cause of the predicament at hand. A sectarian, feudalistic system built on greed and corruption will fail again and again until its basic beliefs and principles are changed and until with the help of a strong and independent judicial system a state of law and order is created.

The following are some of the major highlights of the reform plan:

(1)  The fixed exchange rate peg that was adopted by Lebanon in 1993 and maintained against many odds until a few months ago when BDL ran out of ammunition was expensive and unsustainable. Fixed pegs are an anachronism in a world that adopted floating rates almost fifty years ago. A fixed peg is maintained essentially by buying and selling ones currency. Obviously it is easier to sell ones currency than to buy it simply because buying requires foreign reserves that are scares to begin with. Once capital inflow declined BDL encouraged banks to attract more dollars deposits from abroad which they were glad to do provided BDL took from the banks the attracted deposits and compensated them with higher rates still.

As you can see from the above, it can be easily argued that excessive imports, dearth of exports, high interest rates, a financial engineering scheme to pay one party from the proceeds of another as well as a banking system that is too large to fail originated with the decision to maintain a fixed peg rate of exchange of around 1500 LL to the USD.

The reform plan will establish the devalued rate of 3500 LL per USD as the starting point in 2020 and will slowly allow for a crawling peg to reach 4297 LL per USD in 2024. Deshackling the Lebanese currency is a must and the 3500 LL is a reasonable starting point. But whether an exchange rate of 4297 will hold 4 years from now is problematic. Note that the plan has put in place a ground of 3500LL / USD, a level that implies a substantial devaluation of just over 57%as a starting point.

(2)  A proposed fiscal policy guided by the idea of reaching a balanced budget through enhanced tax collection, a progressive income tax, resolving the never ending EDL hemorrhage, restructuring sovereign debt, recovering stolen assets and enacting laws to stem corruption has lots of appeal. Yet, to use the popular idiom, the proof of the pudding is in the eating. Is the EDL problem going to be resolved, are progressive income taxes going to be collected efficiently ,is any stolen property going to be recovered? Time will tell. But despite the uncertainty associated with the above one can voice strong warnings about adopting a contractionary fiscal policy at a time of great unemployment and an equally very widely spread impoverishment. Some of the brightest minds in economics , such as Paul Krugman, have made it their mission to spread the gospel that a major crisis similar to what Lebanon is going through is NOT the time for contractionary fiscal policy . It is just the opposite. Lebanon needs expansionary policies whose aim is increased employment and a more equitable wealth distribution.

One might also add that the goal of debt restructuring , as detailed in the plan, is a bit shy.  The plan aims to lower Debt?GDP to around 99% and ultimately to 83% by 2027. It is clear that the GDP is going to shrink substantially during 2020 and is expected to be around $33 billion by 2024 but yet a 99% debt burden is too high especially when there are a number of studies that suggest that debt of over 60%-65% of the GDP is less effective in promoting growth. One wishes that the reform plan would adopt a goal of restructuring sovereign debt to become compatible with that.

(3) The sum total of the estimated losses total 241 trillion LL or $69 billion (using the exchange rate of 3500 LL/USD). This debt is estimated based on 4 components: 73 trillion LL Debt Restructuring; 66 trillion LL BDL loses and 40 trillion LL commercial bank losses due to non performing loans plus  a combined BDL and Banks LL 62 trillion due to devaluation. Furthermore it is estimated that the LL 241 trillion is BDL related while LL 64 is Banks related. But both BDL and the banks have assets to defray some of these losses. The final net loss that is needed is LL 121 trillion at BDL and LL 33 trillion from the banks i.e. a total amount of LL 154 trillion or $44 billion.

Again the report relies on recovery of stolen assets and monies sent abroad in violation of laws. If laws were violated why hasn’t anyone moved against the violators yet, if there is proof that assets were stolen why haven’t we started the process of recovery? And one must ask about the legality of recovering what the plan calls excessive dividends. Can one decide that a private enterprise paid an excessive dividend 5 years ago? What are the standards for making a dividend excessive. The same set of arguments applies to what the plan refers to as recovery of excessive interest.

It can be argued that most of the above will not be materialized and that all of these rationales are attempts to avoid taking the tough decisions. Banks must recapitalize and those that fail to do so will be bought /nationalized by the state and then refloated on the Beirut exchange to the general public.

There are, as expected, a few other areas, such as social safety net, that the plan speaks to but we could visit at a different time. We must add that there are also major areas that the plan does not add such as environmental protection, clean energy and income distribution.