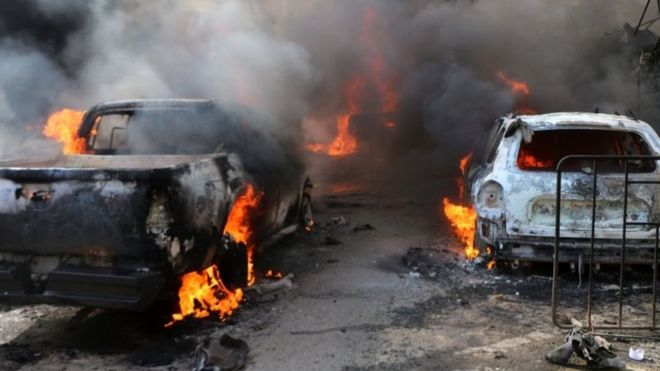 At least 40 people have been killed in a bomb attack in the north-western Syrian city of Afrin, Turkey says.

The governor of the neighbouring Turkish border province of Hatay said a fuel tanker rigged with a hand grenade exploded at a crowded market place.

He and Turkey’s defence ministry blamed a Kurdish militia group, the YPG, which they see as linked to Kurdish militant groups inside Turkey.

In 2018, they launched a joint operation to drive the Syrian Kurdish People’s Protection Units (YPG) militia out of the city and its surrounding region.

The Turkish government accuses the YPG of being an extension of the banned Kurdistan Workers’ Party (PKK), which is designated as a terrorist organisation by Turkey, the US and EU.

The YPG, which the US relied on to defeat the jihadist group Islamic State (IS) in Syria, says they are separate entities.

The fuel tanker exploded at an open air market in the central Souk Ali area of Afrin on Monday afternoon, close to the local government’s offices, according to the Syrian Observatory for Human Rights, a UK-based monitoring group.

The market is usually full of shoppers in the hours before Muslims break their daily fasts for the holy month of Ramadan.

Images from the scene showed thick black smoke rising above a residential area, and cars and food stalls on fire.

The Turkish defence ministry said all of those killed in the attack were civilians and that they included 11 children. Forty-seven other civilians were wounded, it added.

“The enemy of humanity PKK/YPG has once again targeted innocent civilians in Afrin,” the ministry tweeted, without providing any evidence.

The Syrian Observatory for Human Rights said 40 civilians were killed along with six Syrian opposition fighters allied to Turkey.

The Syria Civil Defence, whose rescue workers are commonly known as the White Helmets, denounced the “horrific massacre” of civilians. It put the death toll at 42.

It said the attack was “just one more nail in the coffin of the Syrian people” and called for “international intervention to save lives and protect innocents”.