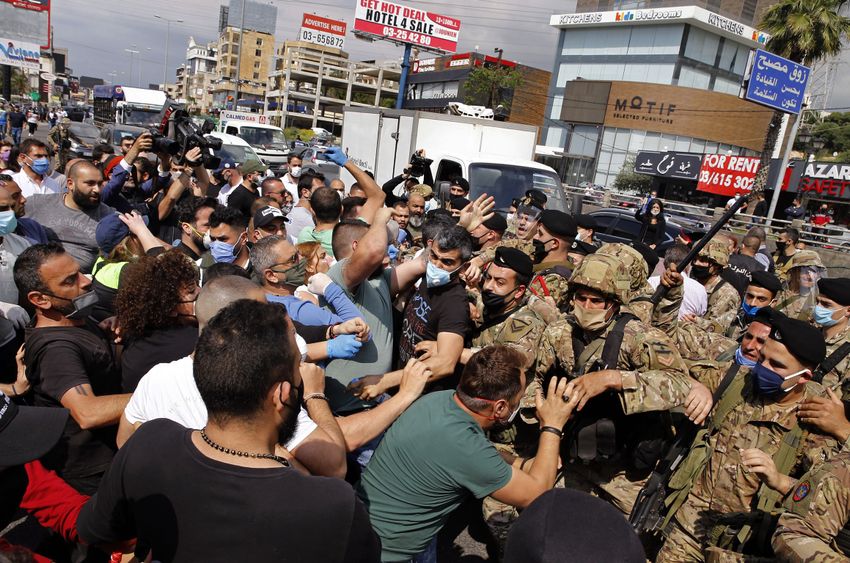 Anti-government protesters scuffle with Lebanese army soldiers in the town of Zouk Mosbeh, north of Beirut, Lebanon, Monday, April 27, 2020. Scattered anti-government protests broke out in several parts of Lebanon on Monday amid a crash in the local currency and a surge in food prices, leading to road closures that prevented medical teams from setting out from Beirut to conduct coronavirus tests across the country. Lebanon’s central bank chief Riad Salameh Wednesday blamed a lack of government reforms for a spiralling economic crisis that has seen angry protesters spill back into the streets despite a coronavirus lockdown. (AP Photo/Bilal Hussein)
Share:

Lebanon’s under-fire central bank chief Wednesday blamed a lack of government reforms for a spiralling economic crisis that has seen angry protesters spill back into the streets despite a coronavirus lockdown.

Lebanon is grappling with its worst economic turmoil since the 1975-1990 civil war, now compounded by a lockdown to halt the stem of the novel coronavirus.

A plummeting currency and fast-rising prices have reignited protests which saw one man killed after being struck by a bullet fired by a soldier during clashes late Monday.

Responding to the mounting anger, Salameh in a rare televised address defended the central bank, saying “we funded part of the state’s needs” as have international donors.

“We did all this because the state had promised reforms, which were not translated into reality for political reasons,” he said, alluding to lengthy stretches in recent years when Lebanon lacked a functioning government, president or even working parliament.

“I don’t know if there was real will for the reforms, but the central bank has always asked for them.”

Debt-burdened Lebanon has been rocked by a series of political crises in recent years, before an economic crunch helped set off unprecedented cross-sectarian mass protests in October and unseated the last government.

The demonstrations had largely petered out after a new cabinet was tasked earlier this year with implementing urgent reforms to unlock billions in international aid.

Then the small Mediterranean country largely closed down to tackle the virus that has infected 721 people and killed 24.

But in recent days, and in defiance of the ongoing lockdown, the demonstrators have hit the streets again, railing against a sharp devaluation and stinging price hikes.

The exchange rate, long pegged at 1,507 Lebanese pounds to the dollar, has soared to more than 4,000 pounds in recent days.

Prices have risen by 55 percent, while 45 percent of the population now lives below the poverty line, according to government estimates.

Mobs have in recent nights targeted banks, which demonstrators view as sharing blame in the crisis and accuse of holding their savings hostage.

Banks have gradually restricted dollar withdrawals until halting them altogether last month, and transfers abroad have been banned.

Salameh in his speech said he wanted to reassure Lebanese that “their deposits are still there and being used in the banking sector”.

He said the central bank still held almost $20.9 billion in liquidity it could use, in a country that needed $16 billion a year to “keep going”.

The central bank governor spoke after Prime Minister Hasan Diab on Friday criticised the bank’s performance and said an international firm had been tasked with auditing its books.

The premier also said bank deposits had plunged $5.7 billion in January and February, in the latest apparent report of capital flight despite capital controls.

But Salameh on Wednesday said no such sum had exited the country.

On Tuesday, the government tasked the finance ministry with requesting the central bank disclose total amounts transferred abroad since the start of 2019, including “amounts transferred by individuals dealing with public affairs”.

Lebanon is one of the most indebted countries in the world with debt equivalent to 170 percent of its GDP.

Salameh’s supporters credit him with having stabilised the Lebanese pound for more than two decades after the civil war.

But his critics see him as having backed a policy of endless borrowing and creating a ballooning sovereign debt that led to the country’s first ever default in March.